Temperatures across Australia for the week ending for January 8, 2013. Image Credit: Australian Bureau of Meteorology

While our Northern Hemisphere is experiencing winter, the Southern Hemisphere is in the peak of its summer season. For a large portion of Australia, unusual and record-breaking heat is occurring as temperatures climb over 100 degrees Fahrenheit (over 37 degrees Celsius). On Monday, December 7, 2013, the average maximum daily temperature record for Australia was broken at around 105°F (40.33°C). This 40-year-old original record was set in December 21, 1972 at 104°F (40.17°C). According to Assistant Director of Climate Information Services, Neil Plummer, this intense heatwave has broken a lot of records. For instance, the number of consecutive days where the national average maximum daily temperature in Australia exceeded 39°C was broken the past seven days (January 2-8, 2013), almost doubling the previous record of four consecutive days in 1973. Meanwhile, dry conditions and strong winds are creating wildfires across the country. 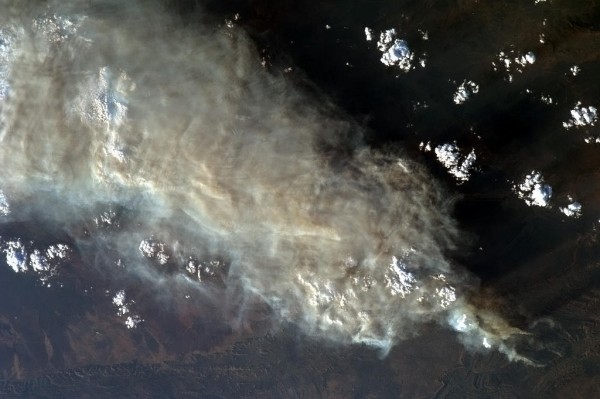 Wildfires are burning across parts of Australia. Image Credit: NASA 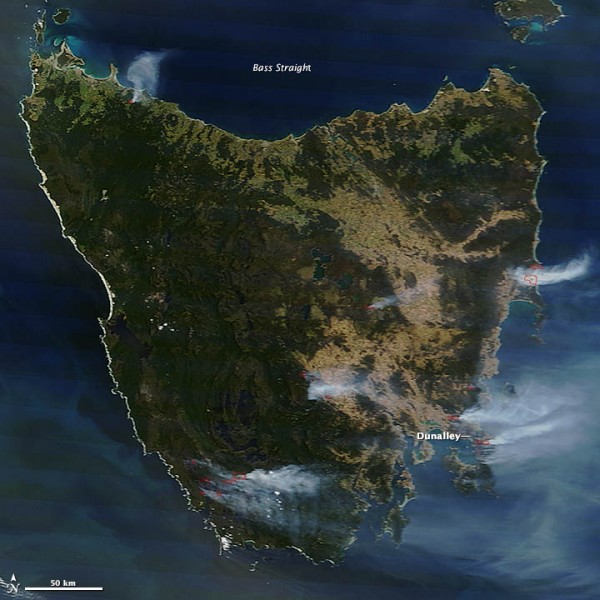 The heatwave has affected portions of central and southern Australia for January 2013. Temperatures will likely remain above 35°C for the upcoming week, as there is no sign of relief for these areas. The dry conditions are creating massive fires across the region. According to the Australian Bureau of Meteorology, the past four months have been unusually warm across Australia. In fact, for September to December, the average Australian maximum temperature was the highest on record with a national anomaly of +1.61°C, which was ahead of the previous record of 1.60°C set in 2002 (Records go back to 1910 across Australia). The lack of a monsoon season is resulting in warm air building across northern Australia and spilling down to the southeast. The upcoming week looks quite hot across the country as temperatures could soar past 110°F (43.3°C) for many areas. The city of Eucla recorded 119°F (48.2 °C) on January 3, 2013, making it the hottest day since records began in 1957. 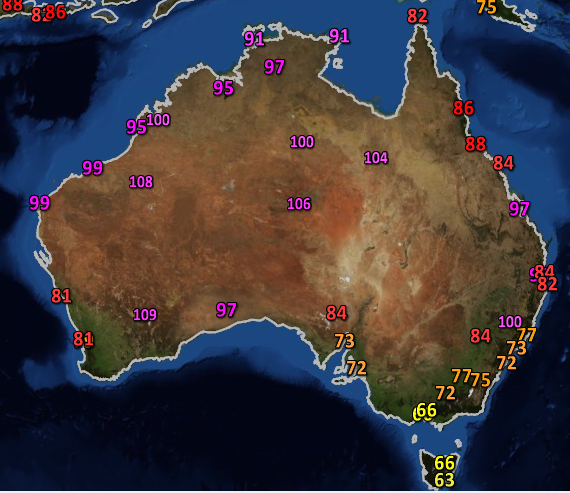 Example of current temperatures (in Fahrenheit) in Australia during the first week of January.

Meanwhile, the heat and winds are contributing to the wildfires that are burning across the country. As of Tuesday, January 8, 2013, nearly 741,000 acres have burned across Australia. Wildfires have been burning in areas such as Tasmania and New South Wales. Although wildfires have been burning throughout the country, there have not been any reports of loss of life. The lack of a monsoon season, which should have already arrived, is being blamed for not only the dry weather, but also for the heat and wildfires across the region.

Bottom line: Australia is experiencing record-breaking heat across the country for the first week of January 2013. The record-breaking high temperatures are expected to continue for the upcoming week as temperatures increase over 37°C for a large majority of the area. Meanwhile, the dry conditions, which is contributing to the increase heat across the region, is also responsible for the wildfires developing across the terrain. A 40-year-old record was broken on Monday, December 7, 2013, when the average maximum daily temperature for Australia was set at 40.33°C, or around 105°F. Above average temperatures have been occurring across Australia since September 2012, and there is very little relief in sight.