August 2012 was the fourth-warmest August on record globally. It was also the 330th consecutive month of above-average global temperatures.

The latest global climate report has been released by the National Climatic Data Center (NCDC), and the results find that August 2012 was the fourth warmest August ever recorded since record keeping began in 1880. Also, August 2012 is the 330th consecutive month of global temperatures being above the 20th century average. In other words, temperatures have been above the norm since President Ronald Reagan was in office in the middle of the 1980s. The global land temperature for August 2012 tied with 2001 and 2011 as the second warmest August on record, behind 1998, at 1.62 degrees Fahrenheit (0.90 degrees Celsius) above the 20th century average of 56.9°F. The warmest locations globally around the world occurred across central and southern Europe, northeast North America, and east central Asia.

Here are a few highlights from around the globe for August 2012:

– Spain experienced temperatures at 2.0°C above average thanks to two heat waves during August 2012 which made August the second warmest August since record keeping began in 1961.

– Austria had temperatures that was 1.9°C above average since record keeping began in 1767, which made August 2012 the fourth warmest August ever recorded.

– Ocean temperatures were 0.94°F (0.52°C) above the 20th century average of 61.4°F (16.4°C). Overall, these temperatures made it the fifth warmest August on record, and also the highest monthly global ocean temperature departure from average for any month since July 2010.

-In the opposite pole, Antarctica sea ice during August 2012 was 1.6 percent above average and ranked as fourth largest August extent in the 34-year period of record. 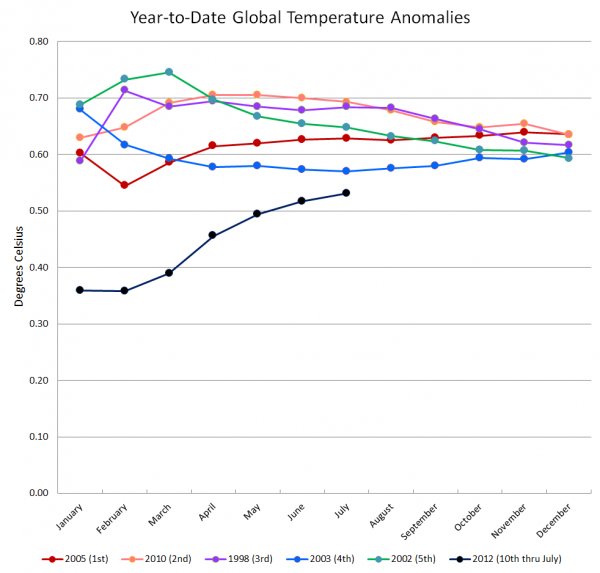 Year to date global temperature anomalies that show the five warmest years ever recorded in relation to 2012. Image Credit: NCDC

Bottom line: August 2012 was the fourth warmest August on record globally with a temperature of 1.62 degrees Fahrenheit (0.90 degrees Celsius) above the 20th century average of 56.9°F. Meanwhile, global land temperature was the all-time warmest June–August on record. So far, 2012 does not match our top five warmest years ever recorded (2005, 2010, 1998, 2003, 2002), but it still remains well above average. In fact, the last time we saw below-average temperatures globally for a month was back on February 1985. Arctic sea ice extent is at the lowest levels ever recorded in over three decades. Arctic sea ice minimum has been reached, by the way. Record low ice extent is 1.32 million square miles. The previous record was set in 2007 (1.58 million square miles).