Audubon Society’s Christmas Bird Count starts December 14 and runs through January 5. It’s free and anyone can participate, but you have to sign up in advance. Here’s how.

‘Tis the season for decorating trees, drinking eggnog, and counting birds. Yes, you read that right. The Audubon Society’s Christmas Bird Count starts December 14, 2014 and runs through January 5, 2015. Now in its 115th year, the Christmas Bird Count has become a holiday tradition for many people in North America. Several sites in South America will also be open to participants this year.

Participating in the Christmas Bird Count is free and anyone can sign up. You just need to find a “circle” near you on Audubon’s map at the link here and contact the group leader to let them know you would like to participate. The count in your area will take place on one day of the event; the exact dates vary from location to location.

In essence, the Christmas Bird Count is a citizen science project. People simply head outdoors to count the types and numbers of birds that they see. Scientists then use the data from the bird count to assess the health of bird populations. The data are also used to help develop conservation programs that protect bird habitat.

To date, over 200 studies published in the scientific literature have used data from the Christmas Bird Count. 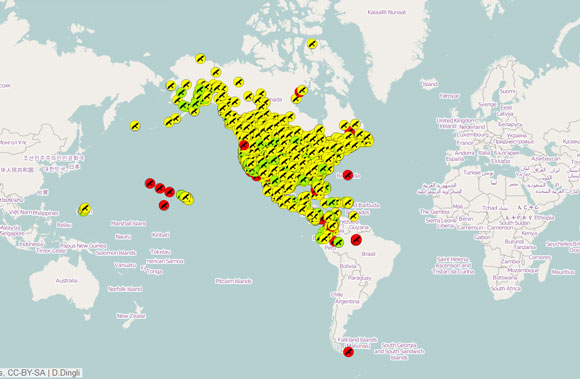 Prior to the turn of the century, people engaged in a holiday tradition known as the Christmas “Side Hunt”: They would choose sides and go afield with their guns; whoever brought in the biggest pile of feathered (and furred) quarry won.

Conservation was in its beginning stages around the turn of the 20th century, and many observers and scientists were becoming concerned about declining bird populations. Beginning on Christmas Day 1900, ornithologist Frank Chapman, an early officer in the then budding Audubon Society, proposed a new holiday tradition—a “Christmas Bird Census”—that would count birds [during] the holidays rather than hunt them.

Clearly, the Christmas Bird Count has become a holiday tradition that has withstood the test of time.

Bottom line: The Audubon Society’s Christmas Bird Count starts December 14, 2014 and runs through January 5, 2015. It’s free and anyone can participate.