Watch online as asteroid 2014 DX110 sweep closer than the moon on Wednesday, March 5. 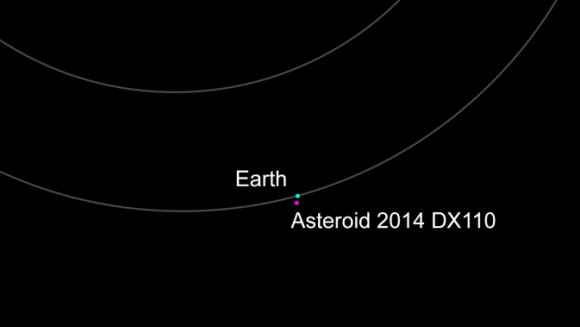 NASA says that – with current detection capabilities – it can see an asteroid passing this close about 20 times a year.

Astronomers discovered 2014 DX110 on February 28, 2014 via the Pan-STARRS 1 survey. Its orbit was initially refined using follow up observations made by the Great Shefford Observatory in West Berkshire, England.

NASA detects, tracks and characterizes asteroids and comets using both ground- and space-based telescopes. The Near-Earth Object Observations Program, commonly called “Spaceguard,” discovers these objects, characterizes a subset of them and identifies their close approaches to determine if any could be potentially hazardous to our planet.

Read more from NASA about the March 5 asteroid pass.