Study: A third of Asia’s glaciers likely gone by 2100

Meltwater from the glaciers supplies water to 800 million people, so that loss would mean serious consequences for water management, food security, energy production. 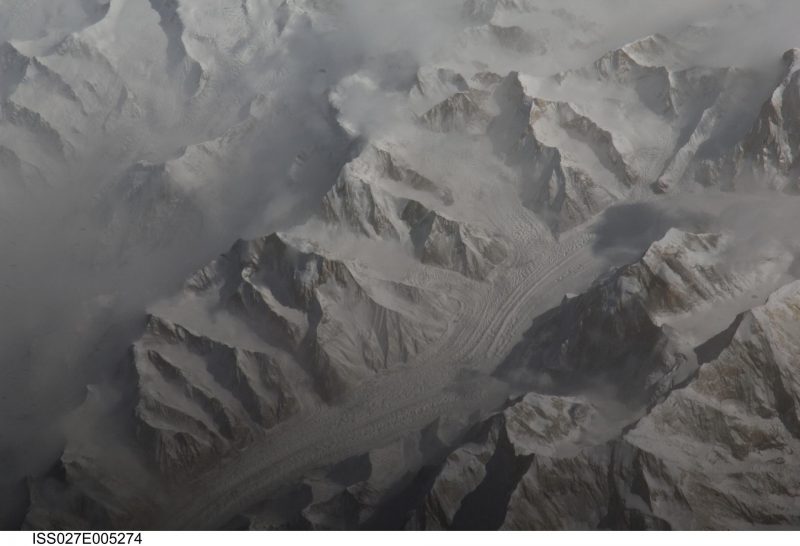 Peaks of the Tien Shan, one of many regions in Asia’s high mountains with predictions of massive glacier loss by the end of the century. Image via NASA.

This article is republished with permission from GlacierHub. This post was written by Miriam Nielsen.

Asia will likely lose at least one-third of its glaciers by the end of this century, according to a study published September 13, 2017 in Nature. The ambitious target of keeping global average temperatures from increasing more than 1.5 degrees Celsius (or 2.7 degrees Fahrenheit) above pre-industrial levels set by the Paris Climate Accords won’t even be enough to curtail this fate, with rising temperatures having an outsized effect on glaciers in the high mountains of Asia.

Philip Kraaijenbrink, the lead author on the paper told GlacierHub:

Our work shows that a global temperature rise of 1.5 degrees actually means a temperature increase of 2.1 degrees on average for the glacierized area in Asia. We show that even if the world meets this extreme ambitious target, thirty-six percent of the ice volume will be lost by 2100.

The goal of 1.5 degrees is generally regarded as extremely ambitious, and Kraaijenbrink and his team found that under more realistic scenarios, ice loss will be between 49 and 64 percent. Meltwater from those glaciers supply water to 800 million people. A loss of even one-third of the glaciers in the region has the potential for serious consequences for water management, food security, and energy production. Kraaijenbrink’s study stops short of investigating the actual impact this loss may have on people, and it is difficult to predict exactly what the future will hold for communities downstream of these glaciers.

Anna Sinisalo, a glaciologist with ICIMOD, who was not associated with the study, told GlacierHub:

There is also a need to reconstruct historical variability of climate to better understand the ongoing change, as without knowing the past we cannot make reliable predictions about the future.

However, this research is still a necessary step to understand how increasing temperatures will affect the region.

In addition to showing that a warming world will lead to losses of glaciers, the researchers also found large differences in how glaciers in the region would respond to climate change. Much of this is due to the characteristics of the individual glaciers, like the amount of debris cover, or differences in local precipitation and temperature projections. Places like Hindu Kush and Pamir, for example, will experience a mean increase in temperature over 2 degrees, while other locations like the Central Himalayas will be closer to the global mean increase. 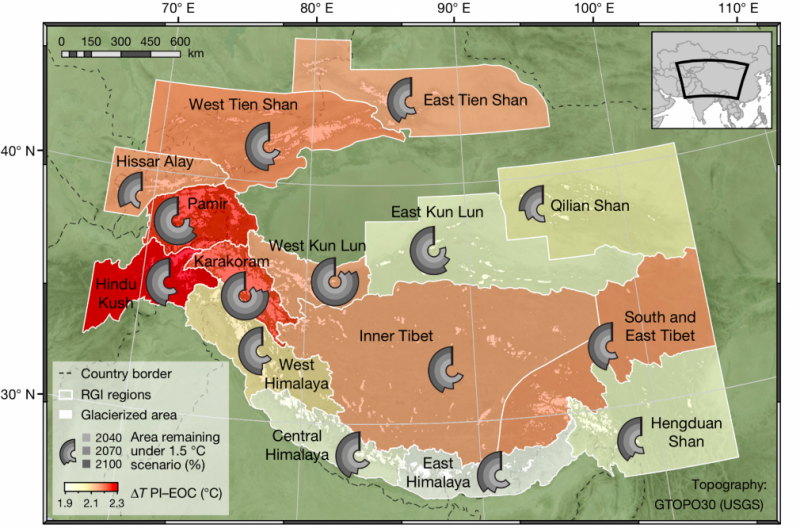 This map shows the differences in glacier loss under various climate projections and the regional differences in temperature increases under a 1.5 degree Celsius scenario. Image via Kraaijenbrink et al.

The team achieved their results by running their model across several climate scenarios and produced a map that showed the differences in glacier loss in different areas under different climate projections. In particular, their model looked at the effects of different Representative Concentration Pathways (RCPs). These pathways range from scenarios that project under 2 degrees Celsius warming (RCP2.6) up to more than 5 or 6 degrees warming (RCP 8.5). The numbers after RCP represent the amount of radiative forcing, which is the difference between the amount of heat from the sun that enters the earth’s atmosphere and the amount of radiation emitted back out into space from the earth. RCP 8.5 is often described as a “baseline” or “business-as-usual” scenario where little or nothing is done to combat climate change.

Of course, there is a fair amount of uncertainty in this research. It is unclear how much the climate will change in the coming decades. For the most part, it depends on how the world tackles carbon emissions, which is why the researchers “included the entire scope of climate projections for this very reason.” Kraaijenbrink and his team also collaborated with other glacier modelers in the Glacier Model Intercomparison Project. According to Kraaijenbrink:

The aim of this is to reduce uncertainties in glacier projections in order to provide better predictions to be used for impact studies and by policymakers.

The researchers paid special focus to debris-covered glaciers because up until now these glaciers in Asia were not well represented in the models. As part of the study, Kraaijenbrink found that about 11 percent of Asia’s high mountain glaciers are covered with debris, with the largest relative coverage in Hindu Kush.

Debris-covered glaciers are particularly difficult to model because researchers have to take into account how the rocks and other materials covering the glacier will affect retreat. In many cases, the debris insulate or protect the glacier from some amounts of radiation and warming. According to Kraaijenbrink, incorporating the debris-covered glaciers in their model allowed them to get a better estimate of future mass loss and understand how different glaciers in different areas would behave.

While the researchers looked at the effects of all RCPs in the region, Kraaijenbrink says the team chose to spotlight the study on 1.5 degrees because

…the IPCC specifically requested studies that consider the effects of limiting temperature rise to 1.5 degrees.

The IPCC is currently preparing a report on the effects of 1.5 degrees of warming, and likely this research will be included to assess the seriousness such a temperature increase.

The study pays close attention to the effects of climate mitigation on glacier shrinkage. Christian Huggel, a glaciologist at the University of Zurich, who was also not affiliated with this study, told GlacierHub that the research

…shows concretely what different mitigation policies imply for the glaciers in the high mountains of Asia. And that [there’s] actually a huge difference whether we will be successful in reducing emissions (like 1.5°C warming of RCP2.6), or not (RCP8.5).

The urgent need for mitigation becomes more evident as the body of research showing the massive effect of anthropogenic climate change, from the tropical Andes to the high mountains of Asia, grows. This urgency, in turn, may hopefully stimulate more effective action to combat climate change.

Bottom line: Asia will likely lose at least one-third of its glaciers by the end of this century, according to a recent study published in Nature.