At least for females, it’s use it or lose it when it comes to sexual reproduction.

Not to sound like a creep or anything, but do you guys want to see a picture of two stick insects having sex?

Okay here it is…

Nice camouflage, stick insects, but we can all still see what you’re up to. Image: Alex Reshanov.

This masterpiece of nature photography was taken at McKinney Falls State Park, just outside of Austin, and at the time I thought I’d witnessed something truly rare and remarkable. I’ve since learned that stick insects can remain “paired” like this for a really long time, so I was likely just one of many hikers yelling to their friends that afternoon, “Quick, come check out these bugs doing it!”

But while some stick insects devote days or even weeks to such couplings, other species forgo fornication altogether, opting instead for a lifestyle of asexual reproduction. And they’ve been at it for quite a while. In the genus Timema, transitions from sexual to asexual species have occurred independently at least seven times, with the oldest asexual species emerging over a million years ago. What happens to insect species that go for hundreds of thousands of years without a roll in the hay? A team of researchers in the Netherlands and Canada aimed to find out whether these insects could pick up where they’d left off in the world of mating or if they’d lost the necessary tools. Their results are published in the Proceeding of the Royal Society B.

It takes a lot more than you’d think to orchestrate a successful stick insect mating. Beyond being able to produce and fuse their gametes, the creatures need to be capable of adhering to the customs of courtship. Females have to produce mate-attracting pheromones, males must perform a sexy dance complete with leg kicks and antennae waves. To test these skills, the researchers pitted males and females of asexual species against their closest related sexual species, or “sister species”. (Attempts to get the asexual insects to hook up with members of their own species were a complete fail.)

How did the asexuals fare? Let’s start with the males… but wait a minute, what males? Aren’t we talking about a population that reproduces asexually? Females’ eggs mature into full-fledged stick insects without ever being fertilized by males, and thus contain genetic material from only one parent – a mother. Shouldn’t they all be ladies? Yes, and no. Despite the sperm-free production of offspring, males can still occur thanks to the insects’ sex determining chromosomes. Unlike the XX/XY system employed by our own species (as well as most mammals), stick insects have only one sex chromosome: X. Females are the product of two such chromosome – XX – whereas males result from just one – XO. Asexual females can produce males if they accidentally lose an X chromosome somewhere during egg production. Asexual males are essentially a typo, and an infrequent one at that. Of the 5000 stick insects collected for the study, only eleven were males. 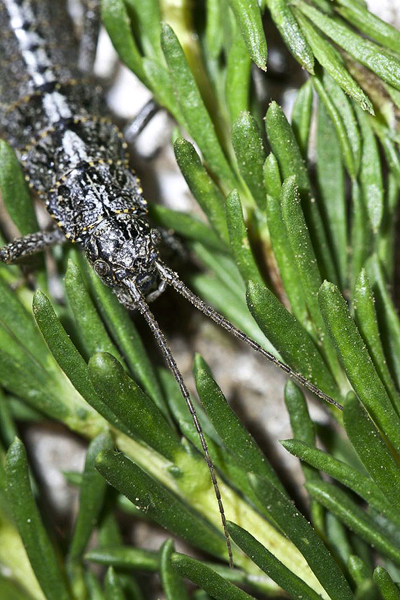 The stick insects in the study, like T. genevievae here, are stockier than the ones I saw cavorting in the park. Image: SFU Public Affairs and Media Relations.

While they have no mating opportunities in the wild, when given a chance to interact with sister sexual species, the small group of asexual males did reasonably well. Their courtship dances were on par with the sexual species*, they still produced sperm, and all succeed in fathering at least some offspring. They fathered fewer offspring than the sexual males, though this is not necessarily a sign that the asexuals produced inferior sperm. Hybrid offspring are often more delicate than those produced by two members of the same species, so eggs fertilized by the asexual males were at a disadvantage. But, all in all, not too shabby.

The female asexuals, on the other hand, were a disaster at the dating game in every aspect studied. For starters, males of their sister sexual species found them undesirable. Sexual males weren’t drawn to the asexual females’ pheromones when placed in a maze with a one portion containing the scent. Males were also less eager to mate with asexual females when placed in direct contact. To make sure this wasn’t just a matter of preference for one’s own species, the team also paired the sexual males with sexual females of different species, ranging from closely to distantly related. But even when compared to these additional species, asexual females received significantly less male attention than their sexual counterparts.

Asexual females were also more likely to resist the advances of any males that opted to approach them. And on those rare occasions when copulation did occur, asexual females had no use for their partners’ sperm. Genotyping of the resulting offspring showed no evidence of male DNA in the mix.

There were physical differences too. Asexual females’ hydrocarbon profiles were unlike those of the sexual females and “more variable.” (Translation: their pheromones were all wonky.) Additionally, the asexuals’ spermathecae (sperm storage organs of females), while still intact and able to accomodate male donations, were rather misshapen.

So why did the traits of male and female asexual stick insects meet such different fates? Why would males retain their sexual abilities while the females go the use it or lose it route? More than one factor may be responsible, but the most compelling explanation is that this is a case of natural selection versus genetic drift.

Females, being the only members of asexual species passing on genetic material to the next generation, are subject to natural selection. Once they gave up sexual reproduction, traits related to sex would no longer be advantageous. In fact, they would likely be handicaps. Sexual signals like pheromones don’t just attract mates, they also draw the attention of predators. So females with these now maladaptive qualities wouldn’t live as long and produce as many offspring as their more streamlined cousins.

Males, however, occurring only by accident, are not directly affected by natural selection. Information for how to make sexually successful males continues to reside in the X chromosomes of females, without benefiting or harming the carriers. Such neutral genetic material, having no effect on the success or failure of the individuals harboring it, is not selected for or against. In this case changes to male anatomy and behavior would occur not through natural selection but via genetic drift. Genetic drift is the term for those changes in a gene pool that occur by chance, and it’s a much slower process than natural selection. So the asexual males may indeed be changing too, but it could take millions of years to really see the difference. If I happen to live that long, I promise to update this post with any new information. Feel free to remind me if I forget.

* Luckily, the dance steps don’t vary much from species to species.