In 2007, we saw the smallest Arctic summertime ice extent since record keeping began. As summer 2012 begins, ice is melting faster now than at this same time in 2007.

June 20, 2012 at 23:09 UTC (7:09 p.m. EDT) is the northern summer solstice, which many consider the start of summer in this hemisphere. The year’s warmest temperatures are yet to come across the Northern Hemisphere. Those warming temperatures do not bode well for Arctic sea ice in 2012, which is already melting fast. The summer of 2007 saw the smallest Arctic summertime ice extent since satellite record keeping began in the 1970s. As of June 20, 2012, with summer 2012 just beginning, ice is melting faster than at this same time in 2007.

Everything you need to know: June solstice 2012 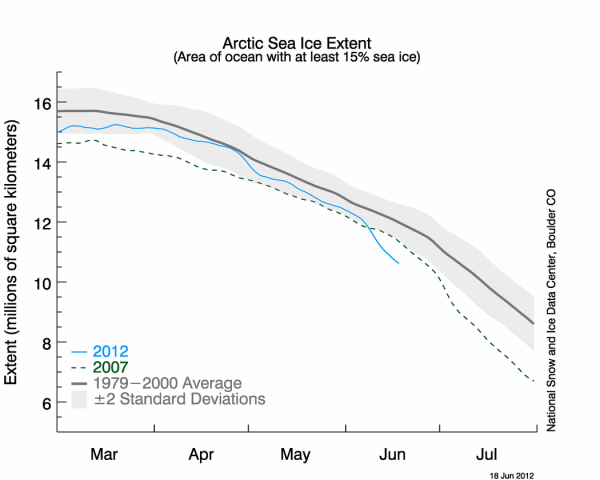 Arctic sea ice typically covers about 14 to 16 million square kilometers in late winter (in contrast, in the Southern Ocean surrounding the Antarctic continent, ice extends about 17 to 20 million square kilometers). As Earth moves through its seasonal cycles each year, the ice at the poles grows during the winter months and shrinks (melts) as summer progresses. The ice melts as ocean temperatures warm in the months following the solstice (due to a phenomenon known as the lag of the seasons). The least ice extent comes in late summer.

Winter 2011-2012 experienced a lot of ice growth across the Arctic. However, the ice extent that grew was new ice. New ice tends to grow and melt faster than old ice that has been around for years.

Most of Earth’s human population lives in the Northern Hemisphere, as there is a larger area of landmass north of the equator than in the Southern Hemisphere. In recent years, sea ice extent has been above average for Antarctica. Meanwhile, sea ice extent in the Arctic has been below average. The average is based on records that began being kept back in 1979, when satellites came into the picture and scientists were able to monitor the sea ice extent across the globe. The average is based on the time span from 1979-2000. Since the advent of satellite records, the data provide evidence that the Arctic sea ice extent has been declining at an increasing pace throughout the past 30 years. 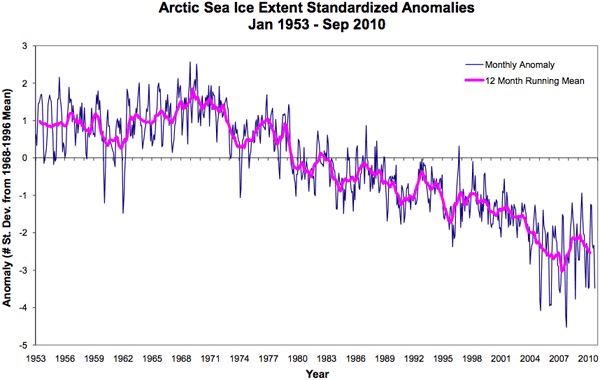 Records are known before 1979

If satellite measurements have been recorded only since 1979, then how do we know what occurred hundreds of years ago? Maybe Arctic sea ice melted in summers of the distant past as much as it has melted in recent summers … right? No one on Earth today – including scientists – has a firm handle on how much Arctic ice has melted in the past, but scientists do try to use various methods to figure it out. To look back into the past, they use indirect sources known as proxy records – old shipping records would be one form of these. Shipping records have been pretty good since the 1950s, but some old shipping records go back as far as the 1700s. The data are incomplete, and researchers are not able to get the overall picture, but these records do suggest that the current decline in Arctic sea ice is unprecedented in the last several hundred years.

What about going back farther in time? Core samples from the ocean floor let scientists study layers of marine sediments laid down hundreds, thousands or even millions of years ago. Scientists can study the remains of plants, algae, and animals in the ocean floor or along coastlines. Ice cores pulled from deep within Arctic glaciers contain evidence of past temperatures and periods of cooling and warming. It’s clear from this historical data that Arctic sea ice extent is closely linked to Earth’s climate. In a warmer climate, there is less sea ice in the summer. That seems to be what’s happening now.

By the way, there’s a great article about what we know about Arctic sea ice before satellites here. 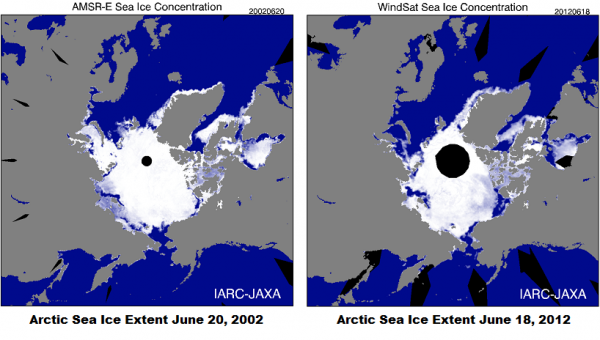 Comparison of ice extent in the Arctic in June 2002 versus June 2012. Image Credit: IARC-JAXA

Bottom line: As summer begins in 2012, Arctic ice is melting faster at this time than back in 2007, when we saw the smallest summertime Arctic ice extent since the satellite era began. We can expect Arctic sea ice in 2012 to continue to melt until around September 2012. After September, ice should begin to grow again as the winter months approach. Later this year, we will have a full report card on the state of Arctic sea ice in 2012. Until September 2012, we will not know how much ice will be lost. Could 2012 break 2007’s record for the smallest sea ice extent in summer?