If a gap interrupts a swarm of army ants, they build a ‘living bridge’ using their own bodies. How? New research says ants perform a collective computation.

Army ants of the species Eciton hamatum move in columns over the forest floor of Central and South America, killing every insect in their path. If a chasm or gap disrupts the raiding swarm, the ants simply build a bridge — using their own bodies. Instinctively stretching across the opening, clinging on to one another, the ants pass over the living bridge even as they’re assembling it. Army ant swarms might form several bridges during a day, which can see the back-and-forth of thousands of ants.

New research, published November 23, 2015 by Proceedings of the National Academy of Sciences reports that these structures are more sophisticated than scientists knew. The ants form living bridges without any oversight from a “lead” ant, the researchers say. Instead, the action of each individual ant coalesces into a group unit, say the researchers, that adapts to the terrain and yet operates by a clear cost-benefit ratio. The ants will create a path over an open space up to the point when too many workers are being diverted from collecting food and prey.

Matthew Lutz, a graduate student in Princeton’s Department of Ecology and Evolutionary Biology is the study’s co-first author. Lutz said:

These ants are performing a collective computation. At the level of the entire colony, they’re saying they can afford this many ants locked up in this bridge, but no more than that. There’s no single ant overseeing the decision, they’re making that calculation as a colony.

Individual ants adjust to one another’s choices to create a successful structure, say the researchers, despite the fact that each ant doesn’t necessarily know everything about the size of the gap or the traffic flow. Co-author Iain Couzin is director of the Max Planck Institute for Ornithology and chair of biodiversity and collective behavior at the University of Konstanz in Germany. Couzin said:

They don’t know how many other ants are in the bridge, or what the overall traffic situation is. They only know about their local connections to others, and the sense of ants moving over their bodies. Yet, they have evolved simple rules that allow them to keep reconfiguring until, collectively, they have made a structure of an appropriate size for the prevailing conditions.

The researchers found that the ants, when confronted with an open space, start from the narrowest point of the expanse and work toward the widest point, expanding the bridge as they go to shorten the distance their compatriots must travel to get around the expanse. Previously, scientists thought that ant bridges were static structures. 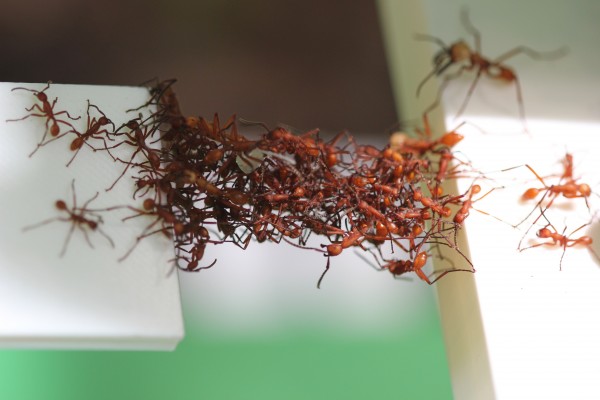 In robotics, say the researchers, understanding more about how these ants work could help with creating robots that don’t just rely on themselves, but can exploit the group to do more: Imagine simple robots able to navigate complex spaces singly, but could self-assemble into larger structures — bridges, towers, pulling chains, rafts — when they face something they individually did not have the ability to do.

Bottom line: According to research published November 23, 2015 by Proceedings of the National Academy of Sciences, Army ants of the species Eciton hamatum form living bridges without any oversight from a “lead” ant. Instead, the action of each individual ant coalesces into a group unit that adapts to the terrain and yet operates by a clear cost-benefit ratio.