A June 21 satellite image of the Arizona Wallow fire shows the fire’s burn scar as seen from space.

Started on May 29, 2011, the Wallow fire swiftly grew into the biggest fire in Arizona history. The image below, acquired on June 21, 2011 by the Terra satellite, shows the fire’s burn scar as seen from space. 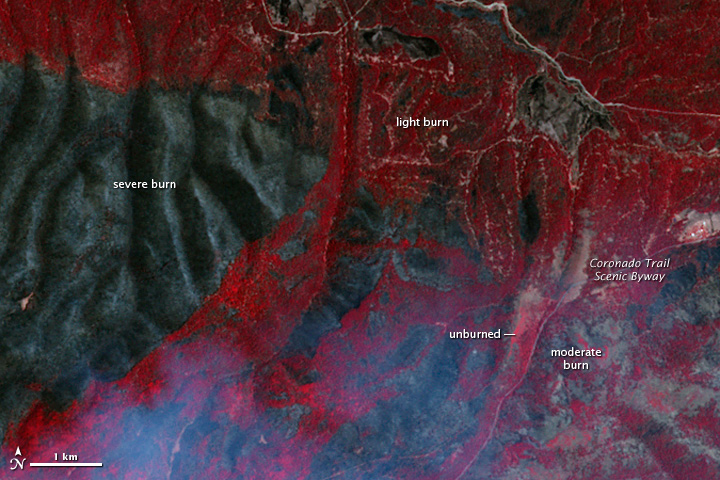 In this image, plant-covered land is red in the false color which includes both visible and infrared light. Patches of unburned forest are bright red in subtle contrast with slightly darker areas where flecks of black indicate some burning. The dark charcoal-colored areas are burned severely. The severe burns are fringed by slightly lighter shades of gray where the burn was moderate. The fire was still burning when this image was taken – you can see smoke as a pale blue haze along the lower border of the image.

Even as firefighters finish containing the fire, work is underway to restore the forest. Satellite images like this one play a significant role in assessing how badly the forest was burned. The image helps responders identify the most severely affected areas where the land may need stabilizing to prevent further damage.

Officials are already warning of the potential for dangerous floods and landslides. As this image shows, sections of the Wallow fire burned all stabilizing plants on steep mountain slopes. The charred soil does not absorb water, and as a result, even moderate rain may trigger floods and landslides.

Bottom line: Arizona’s Wallow fire was first reported in the early afternoon of May 29, 2011. Fueled by extremely dry conditions and spread by strong winds, the fire had burned 538,048 acres of forest in the White Mountains of eastern Arizona by June 27. But as it burned, the Wallow fire was not all-consuming. The satellite image shows areas of complete burn side-by-side with places that were only moderately or lightly burned or not touched at all.