Arctic sea ice losses during 2011 were the second-greatest in the satellite record dating back to 1979, according to an official NSIDC report.

On October 4, 2011, the National Snow and Ice Data Center (NSIDC) released an official report detailing historic losses of Arctic sea ice in 2011. Sea ice losses during 2011 were the second-lowest in the satellite record dating back to 1979.

On October 2, 2011, EarthSky reported that Arctic sea ice had reached its minimum extent on September 9, 2011, and that the amount of sea ice was the second-lowest in the satellite record. The lowest extent of Arctic sea ice ever recorded was in 2007.

In 2011, the minimum sea ice extent averaged over the month of September was 4.61 million square kilometers (1.78 million square miles). This level was approximately 30 percent lower than the 1979 to 2000 yearly average, and the second-lowest ever recorded. 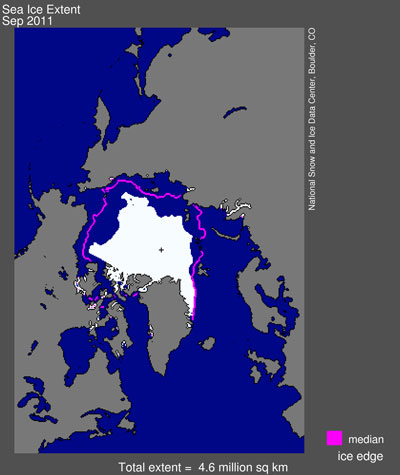 Comparison of the minimum monthly sea ice extent for September 2011 (shown in white) to the average amount for 1979 to 2000 (shown in magenta). Image Credit: NSIDC.

Atmospheric and oceanic conditions were not as conducive to ice loss this year, but the melt still neared 2007 levels.

Arctic sea ice acts as an air conditioner for the Earth because the bright white ice reflects light and heat back into space. Scientists are concerned that a continued loss of sea ice could amplify global warming and climate change.

Overall, Arctic sea ice has been declining since 1979 on the order of 10 to 12 percent per decade. The decline in sea ice is driven largely by warmer air and sea surface temperatures in the Arctic. Data prior to 1979 are less comprehensive, but shipping records suggest that Arctic sea ice has been in a continued state of decline for the last hundred years. Future declines in Arctic sea ice are highly likely.

Decline in Arctic sea ice over the past few decades. Image Credit: NSIDC.

The big summer ice loss this year is setting us up for another big melt year in 2012. We may be looking at an Arctic Ocean essentially free of summer ice only a few decades from now.

Currently, climate models forecast that the Arctic Ocean could lose almost all of its summer ice cover by 2100. However, ice loss in recent years has been proceeding faster than the models predicted.