The maximum extent of Arctic sea ice during 2012 was the ninth lowest in the satellite record.

On March 18, 2012 scientists from the NSIDC observed that Arctic sea ice had likely reached its maximum extent for the year – the ice extent covered approximately 15.24 million square kilometers (or 5.88 million square miles). The scientists commented that there is still a chance that the Arctic sea ice could expand again due to cold weather, but the declines they are currently observing likely mark the beginning of the melt season. 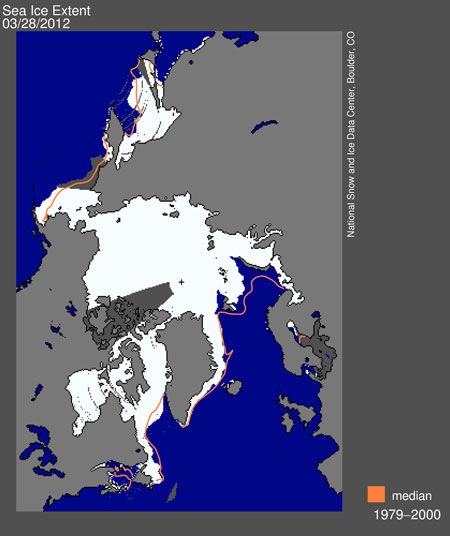 The maximum extent of Arctic sea ice in 2012 was approximately 4% below the 1979 to 2000 average of 15.86 million square kilometers (6.12 million square miles), and it was the ninth lowest in the satellite record. The lowest maximum sea ice extent on record occurred during 2011. 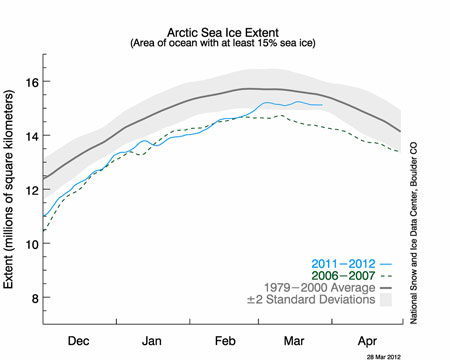 Daily Arctic sea ice extent as of March 5, 2012, along with ice extents for previous years. Image courtesy of the National Snow and Ice Data Center.

Declines in Arctic sea ice may have impacts on wildlife, indigenous communities living in the region, economic activities and widespread weather patterns. Scientists have been observing downward trends in Arctic sea ice, particularly in the summer, over the past thirty years.

In early April, NSIDC scientists will be releasing a complete analysis of this winter’s Arctic sea ice conditions. The April report will include important monthly data for March 2012. Monthly sea ice data provide a better indication of long-term trends due to climate change than daily sea ice data.

The amount of ice at the maximum is a function of not only the state of the climate but also ephermeral and often local weather conditions. The monthly value smoothes out these weather effects and so is a better reflection of climate effects.

The National Snow and Ice Data Center (NSIDC) was formed in 1976 to advance knowledge of Earth’s frozen regions. The NSIDC is part of the Cooperative Institute for Research in Environmental Sciences, a joint science program administered by the National Oceanic and Atmospheric Administration (NOAA) and the University of Colorado at Boulder.