And, at both the poles, sea ice extents were at or near record low levels, according to the National Oceanic and Atmospheric Administration. 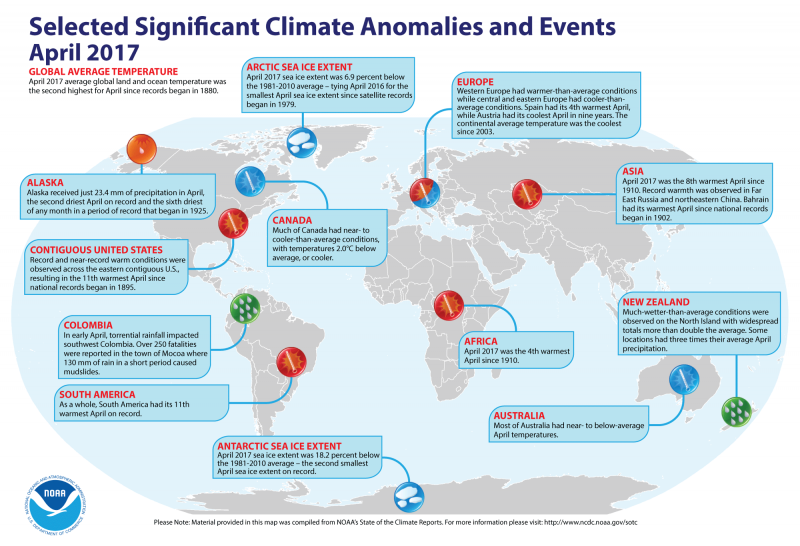 View larger | Map of significant climate events that occurred around the world in April 2017. Image via NOAA.

According to an analysis by scientists at the National Oceanic and Atmospheric Administration (NOAA), April 2017 was the third consecutive month with the second-highest global average temperatures in the 138-year temperature record. The year-to-date temperatures from January through April 2017 also ranked second-warmest. At both the poles, sea ice extents were at or near record low levels.

The year-to-date average temperature was 1.71 degrees F above the 20th-century average of 54.8 degrees. This was the second-highest for this period on record; 0.34 of a degree cooler than the record set in 2016.

NOAA reported continuing record-low sea ice at both poles The average Arctic sea ice extent was 6.9 percent below the 1981-2010 average for April and tied with 2016 as the smallest in April since records began in 1979. At the other end of the Earth, the average Antarctic sea ice extent in April was 18.2 percent below the 1981-2010 average and ranked as second smallest extent on record for the month.

Enjoying EarthSky so far? Sign up for our free daily newsletter today.