Another reason to be thankful for turkey

Be thankful for turkeys this Thanksgiving! An antibiotic to target staph infections and strep comes from good bacteria made inside turkeys, say researchers. 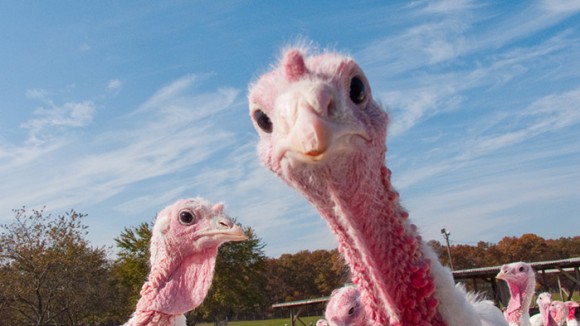 Here’s another reason to appreciate turkey this Thanksgiving: According to researchers, the biological machinery needed to produce a potentially life-saving antibiotic is found in turkeys.

Brigham Young University microbiologist Joel Griffitts and his team are exploring how the turkey-born antibiotic comes to be. Griffitts said:

Our research group is certainly thankful for turkeys. The good bacteria we’re studying has been keeping turkey farms healthy for years and it has the potential to keep humans healthy as well.

That’s because the good bacteria in turkeys, Strain 115 as scientists know it, produces an antibiotic called MP1 — a known killer that could target staph infections, strep throat, severe gastrointestinal diseases and roughly half of all infectious bacteria. This antibiotic, however, is not in widespread use because of its complex structure.

The research team has been working to identify exactly how Strain 115 makes this antibiotic, and how it manages to do so without killing itself.

Bottom line: Be thankful for turkeys this Thanksgiving! An antibiotic to target staph infections and strep comes from good bacteria in turkeys, say researchers.