The ancient lake bed, sealed more than a mile under Greenland ice, may be hundreds of thousands or millions of years old, and contain unique fossil and chemical traces of past climates and life. 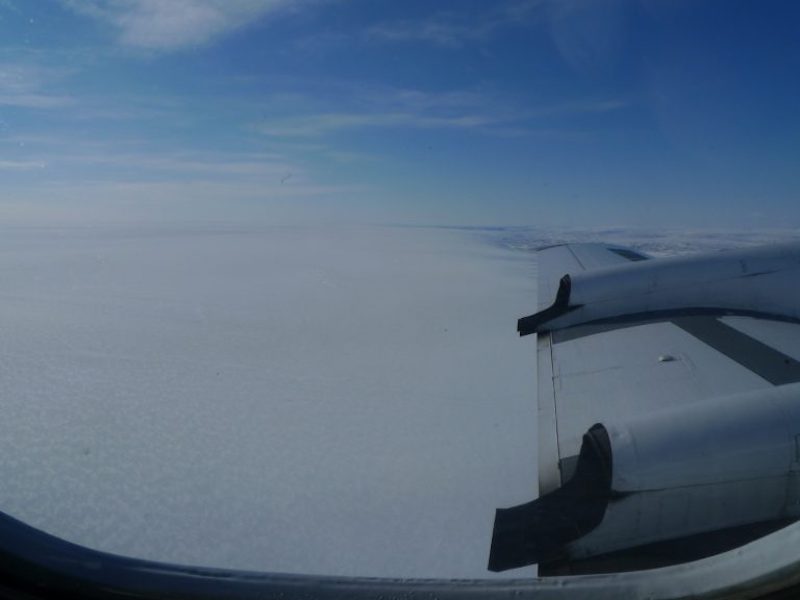 The largely featureless surface of the Greenland ice sheet, as seen from the window of a P3 aircraft carrying geophysical instruments aimed at detecting geologic features underneath the ice. Image via Kirsty Tinto/ Lamont-Doherty Earth Observatory.

This article – written by Kevin Krajick – is republished with permission from The Earth Institute’s State of the Planet.

Scientists have detected what they say are the sediments of a huge ancient lake bed sealed more than a mile under the ice of northwest Greenland, the first-ever discovery of such a sub-glacial feature anywhere in the world. Apparently formed at a time when the area was ice-free but now completely frozen in, the lake bed may be hundreds of thousands or millions of years old, and contain unique fossil and chemical traces of past climates and life. Scientists consider such data vital to understanding what the Greenland ice sheet may do in coming years as the climate warms, and thus the site makes a tantalizing target for drilling. A paper describing the discovery is in press at the journal Earth and Planetary Science Letters.

This could be an important repository of information, in a landscape that right now is totally concealed and inaccessible. We’re working to try and understand how the Greenland ice sheet has behaved in the past. It’s important if we want to understand how it will behave in future decades.

The ice sheet, which has been melting at an accelerating pace in recent years, contains enough water to raise global sea levels by about 24 feet (7 meters). 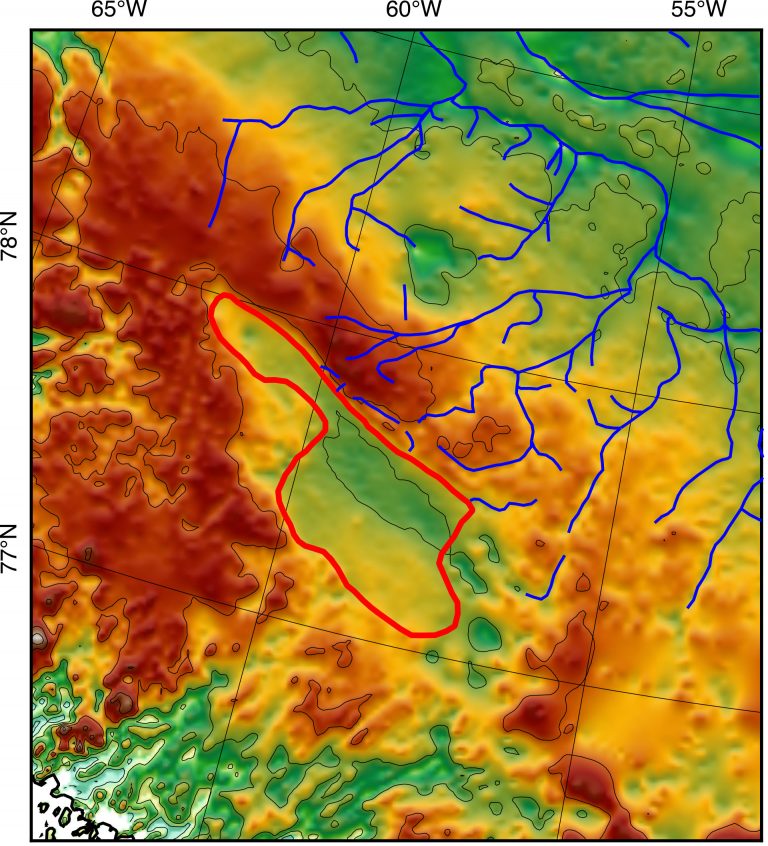 The researchers mapped out the lake bed by analyzing data from airborne geophysical instruments that can read signals that penetrate the ice and provide images of the geologic structures below. Most of the data came from aircraft flying at low altitude over the ice sheet as part of NASA’s Operation IceBridge.

The team says the basin once hosted a lake covering about 2,700 square miles (7,000 sq km), about the size of the U.S. states of Delaware and Rhode Island combined. Sediments in the basin, shaped vaguely like a meat cleaver, appear to range as much as 3/4 of a mile (1.2 km) thick. The geophysical images show a network of at least 18 apparent onetime stream beds carved into the adjoining bedrock in a sloping escarpment to the north that must have fed the lake. The images also show at least one apparent outlet stream to the south. The researchers calculate that the water depth in the onetime lake ranged from about 50 meters to 250 meters (160-800 feet).

In recent years, scientists have found existing subglacial lakes in both Greenland and Antarctica, containing liquid water sandwiched in the ice, or between bedrock and ice. This is the first time anyone has spotted a fossil lake bed, apparently formed when there was no ice, and then later covered over and frozen in place. There is no evidence that the Greenland basin contains liquid water today.

Paxman said there is no way to tell how old the lake bed is. Researchers say it is likely that ice has periodically advanced and retreated over much of Greenland for the last 10 million years, and maybe going back as far as 30 million years. A 2016 study led by Lamont-Doherty geochemist Joerg Schaefer has suggested that most of the Greenland ice may have melted for one or more extended periods some time in the last million years or so, but the details of that are sketchy. This particular area could have been repeatedly covered and uncovered, Paxman said, leaving a wide range of possibilities for the lake’s history. In any case, Paxman said, the substantial depth of the sediments in the basin suggest that they must have built up during ice-free times over hundreds of thousands or millions of years. He said:

If we could get at those sediments, they could tell us when the ice was present or absent. 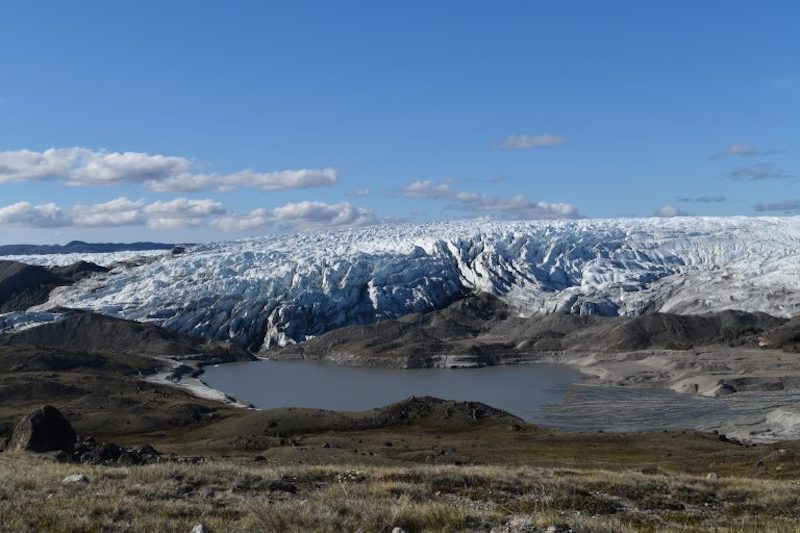 A newly forming lake at the edge of the Greenland ice sheet, exposing sediments released by the ice. Such lake beds are becoming common as the ice recedes due to warming climate. Image via Kevin Krajick/ Earth Institute.

The researchers assembled a detailed picture of the lake basin and its surroundings by analyzing radar, gravity and magnetic data gathered by NASA. Ice-penetrating radar provided a basic topographic map of the Earth’s surface underlying the ice. This revealed the outlines of the smooth, low-lying basin, nestled among higher-elevation rocks. Gravity measurements showed that the material in the basin is less dense than the surrounding hard, metamorphic rocks, evidence that it is composed of sediments washed in from the sides. Measurements of magnetism (sediments are less magnetic than solid rock) helped the team map the depths of the sediments.

The researchers say the basin may have formed along a now long-dormant fault line, when the bedrock stretched out and formed a low spot. Alternatively, but less likely, previous glaciations may have carved out the depression, leaving it to fill with water when the ice receded.

What the sediments might contain is a mystery. Material washed out from the edges of the ice sheet have been found to contain the remains of pollen and other materials, suggesting that Greenland may have undergone warm periods during the last million years, allowing plants and maybe even forests to take hold. But the evidence is not conclusive, in part because it is hard to date such loose materials. The newly discovered lake bed, in contrast, could provide an intact archive of fossils and chemical signals dating to a so far unknown distant past.

The researchers wrote that the basin:

… may therefore be an important site for future sub-ice drilling and the recovery of sediment records that may yield valuable insights into the glacial, climatological and environmental history of the region.

With the top of the sediments lying 1.1 miles (1.8 km) below the current ice surface , such drilling would be daunting, but not impossible. In the 1990s, researchers penetrated almost 2 miles (3 km) into the summit of the Greenland ice sheet and recovered several feet of bedrock. At the time, that was the deepest ice core ever drilled. The feat, which took five years, has not since been repeated in Greenland, but a new project aimed at reaching shallower bedrock in another part of northwest Greenland is being planned for the next few years.

Bottom line: Scientists have discovered an ancient lake bed deep beneath Greenland ice that may be hundreds of thousands or millions of years old, and contain unique fossil and chemical traces of past climates and life.

Via State of the Planet