Two fossil flowers, found perfectly preserved in amber, came from an asterid group that ultimately gave rise to some of the world’s most famous poisons. 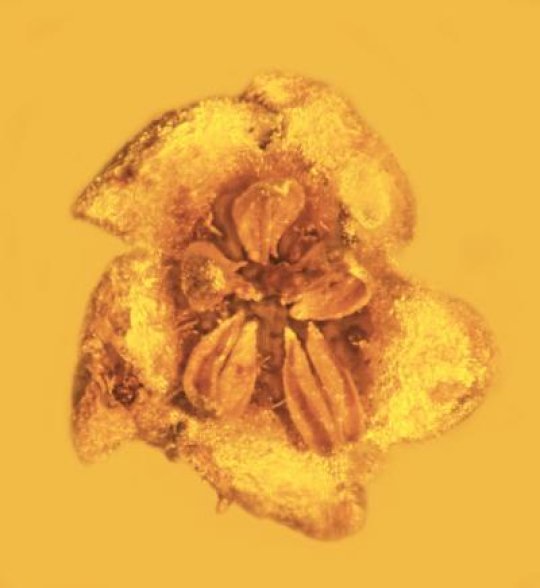 This asterid flower is one of the only fossils of this family ever discovered. Image credit: George Poinar, Jr., courtesy of Oregon State University

Researchers have discovered two 20-to-30-million-year-old fossil flowers in the Dominican Republic. The specimens, perfectly preserved in a piece of amber, are the first-ever fossil specimens of an asterid.

Asterids are a group of flowering plants that gave us everything from the potato to tomatoes, tobacco, petunias and coffee. But these fossil flowers, say the researchers, came from the dark side of the asterid group. They belong to the genus Strychnos, which ultimately gave rise to some of the world’s most famous poisons, including strychnine and curare.

The findings were published in the journal Nature Plants on February 15, 2016. 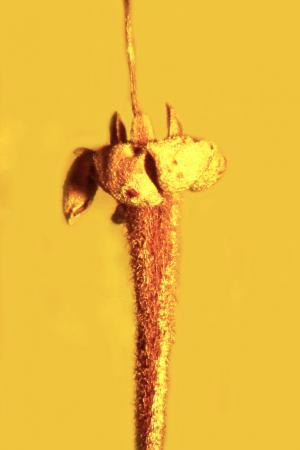 Asterids, the researchers noted in this study, are among Earth’s most important and diverse plants, with 10 orders, 98 families, and about 80,000 species. They represent about one-third of all the Earth’s diversity of angiosperms, or flowering plants.

And one ancient genus, Strychnos, which has now been shown to be inherently toxic, existed for millions of years before humans appeared on the planet.

Researcher George Poinar, Jr. is a courtesy professor in the College of Science at Oregon State University, and one of the world’s experts on plant and animal life forms preserved in amber. Poinar said:

Species of the genus Strychnos are almost all toxic in some way. Each plant has its own alkaloids with varying effects. Some are more toxic than others, and it may be that they were successful because their poisons offered some defense against herbivores.

Today some of these toxins have been shown to possess useful and even medicinal properties.

As natural poisons that humans came to understand and use, two extracts from plants in the Strychnos genus ultimately became famous – strychnine and curare.

Strychnine had practical uses for decades as a pesticide, and was often the deadly component of rat poison. But it also captured the imagination of writers, and was used by Norman Bates in the movie Psycho to kill his mother and her male companion. In small doses, it can increase mental and muscular activity.

Curare has an even stranger history. Sir Walter Raleigh may have first encountered it in 1596 when he observed poison arrows in South America, where natives also developed the poison in blow-gun darts to paralyze hunted prey. Curare was featured as the murder weapon in one Sherlock Holmes novel, and in lower doses it has been used as a muscle relaxant in surgery.

There are now about 200 species of Strychnos plants around the world, in forms ranging from shrubs to trees and woody climbing vines, mostly in the tropics. They are still being studied for medicinal properties, such as for the treatment of parasitic worm infections and even as drugs to treat malaria.

Bottom line: In the February 15, 2016 issue of the journal Nature Plants,
Researchers described two 20-to-30-million-year-old fossil flowers discovered in the Dominican Republic. The specimens, perfectly preserved in a piece of amber, are the first-ever fossil specimens of an asterid, from the toxic genus Strychnos.