Was ancient Earth a water world?

Earlier studies have suggested the possibility that Earth was once covered with water. New evidence – focused on Earth’s mantle – suggests our planet was a true water world, covered by a global ocean, billions of years ago. 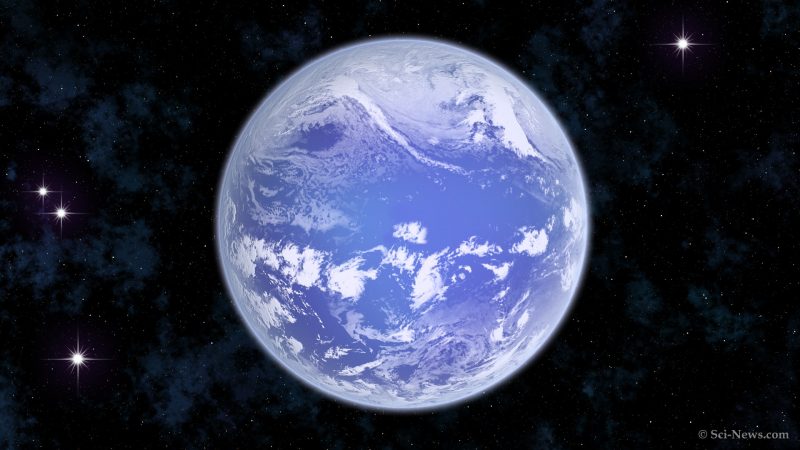 Scientists theorize that some exoplanets – worlds orbiting distant suns – might be water worlds, rocky planets completely covered by global oceans. This month, a researcher at Harvard University published new evidence that Earth itself was once a water world, with its own global ocean and very little, if any, visible land. Planetary scientist Junjie Dong at Harvard is lead author on the new paper, which focuses on the amount of water present in Earth’s mantle, the layer of rock between our planet’s crust and core. These results were published on March 9, 2021, in the peer-reviewed journal AGU Advances.

You probably learned in school that Earth’s water cycle is the continuous movement of water: from evaporation at the ocean surface to the atmosphere – to falling rain that fills rivers and lakes, contributes to glaciers, polar ice caps and reservoirs below ground – and, often much later on a human timescale, ends up in the oceans again. But we don’t as often think of the important role played by water in processes below ground. For example, water content in magma determines how explosive a volcano can be, and water plays an important role in the formation and migration of petroleum.

Seawater also percolates down into oceanic crust. There, it hydrates igneous rocks, transforming them into what are called hydrous minerals. It’s in this form that water is carried farther down into the mantle. Dong’s paper explained the thought processes his team used to conclude that Earth was once a water world:

At the Earth’s surface, the majority of water resides in the oceans, while in the interior, major rock-forming minerals can incorporate significant amounts of water … The amount of water that can be dissolved in Earth’s mantle minerals, called its water storage capacity, generally decreases at higher temperatures. Over billion-year timescales, the exchange of water between Earth’s interior and surface may control the surface oceans’ volume change.

Our results suggest that the long-held assumption that the surface oceans’ volume remained nearly constant through geologic time may need to be reassessed. 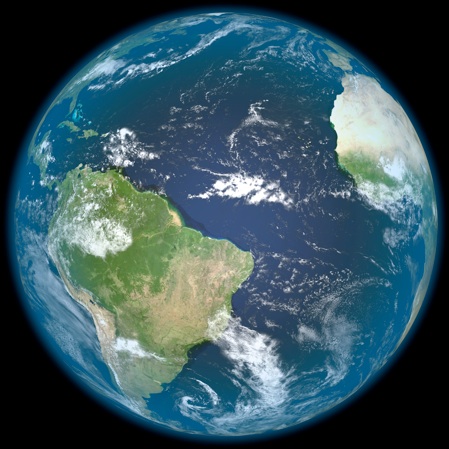 Today, about 71% of Earth’s surface is covered by water. But a few billion years ago, there may have been little to no surface land visible at all. Image via USGS/ Michigan Technological University.

Deep underground on Earth today, water is stored in two high-pressure forms of the volcanic mineral olivine: hydrous wadsleyite and ringwoodite. That water is thought to be in the form of hydroxyl group compounds, which are made up of oxygen and hydrogen atoms.

That suggests the water must have been somewhere else. And the most likely reservoir is the surface.

The storage capacity of the mantle also began to increase over time due to olivine minerals crystallizing out of magma.

As noted in the paper:

What does this mean exactly?

It suggests that most of Earth’s water was on the surface at that time, during the Archean Eon between 2.5 and 4 billion years ago, with much less in the mantle. The planet’s surface may have been virtually completely covered by water, with no land masses at all. 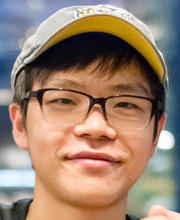 But then where did all that excess water go? Much of it probably seeped into the mantle as the storage capacity of the mantle began to increase when the temperatures inside the mantle gradually cooled. That process has continued until there was the amount of water left on the surface – in all the oceans, seas and lakes – that we see today. Whereas, according to the new study, water once covered at least close to 100% of Earth’s surface, now it covers only 71%.

There was also a previous study from last year that indicated that 3.2 billion years ago, Earth had much less surface land than it does now. Those findings were based on an abundance of certain isotopes of oxygen that were preserved in a geological record of the early ocean.

These new results not only provide a glimpse of what Earth used to be like as a water world, but also have implications for other water worlds in our solar system such as Europa, Enceladus and other ocean moons. Those moons are different from Earth, however, in that their global oceans are covered by crusts of ice. In many ways they are similar to the ice-covered ocean environments at Earth’s poles.

There are several such ocean moons known in our solar system. Even some dwarf planets like Ceres and Pluto had subsurface oceans and may still today. With thousands of exoplanets being discovered, and estimated to be in the billions in our galaxy alone, how many moons are out there? Likely more than we can easily count right now, and if our solar system is any indication, many of those moons may also be ocean worlds.

Other evidence points to the probable existence of many other ocean worlds (planets) as well, ones more like Earth when it was covered by water. Just how habitable they may be is still unknown and we won’t know much more until we, hopefully, find one. 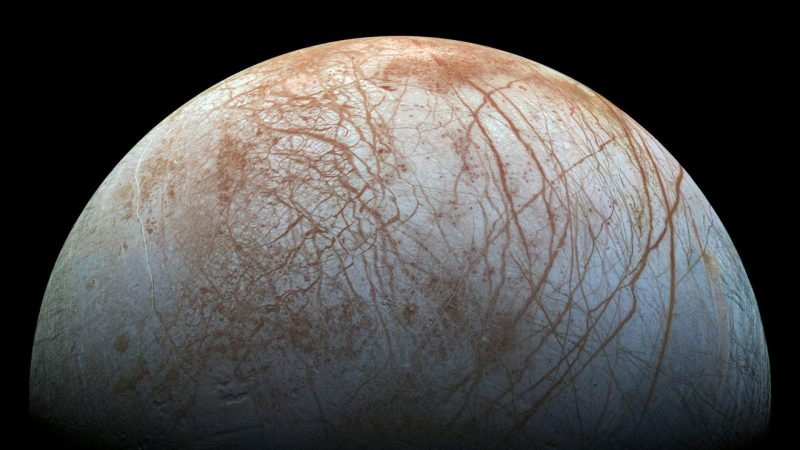 There is growing evidence for other water worlds in our galaxy, and we also have some in our own solar system: moons like Europa (above), Enceladus and others that have global oceans covered by an ice crust. Image via NASA/ JPL-Caltech/ SETI Institute.

The thought of millions or more ocean worlds in our galaxy alone, both planets and moons, is exciting. Learning more about our own planet’s watery past will help scientists find some of them and perhaps even discover evidence of alien aquatic life.

There are also implications for how life began on Earth, as Paul Voosen writes in Science. Some scientists think it began in nutrient-rich hydrothermal vents on the ocean floor. But other theories suggest shallow ponds of water on dry land, which frequently evaporated, creating a concentrated bath of chemicals. A global ocean is problematic for both scenarios. It could have diluted needed biomolecules in the ocean itself, and also made the shallow pools unlikely, since all or most of the land would have been submerged underwater. Thomas Carell, a biochemist at Ludwig Maximilian University of Munich, offers a different possibility: watery pockets within oceanic rocks that broke the surface in volcanic seamounts. He said:

Maybe we had little caves in which it all happened.

Bottom line: New evidence from Harvard suggests that – a few billion years ago – Earth was a true water world, completely covered by a global ocean, with little if any visible land.