First teeth – probably sharp – were on a fierce armored fish that lived roamed the world’s ocean around 430 to 360 million years ago, say researchers.

Around 430 to 360 million years ago, fierce-looking armored fish called placoderms roamed the world’s oceans. Most illustrations show them with jaws and teeth. But whether or not they actually had what we’d now describe as teeth has long been the subject of intense debate among scientists.

Now, using a particle-accelerator called a synchrotron, a UK-led team of researchers has discovered that these early jawed fish did indeed have pearly gnashers. And probably sharp ones at that. 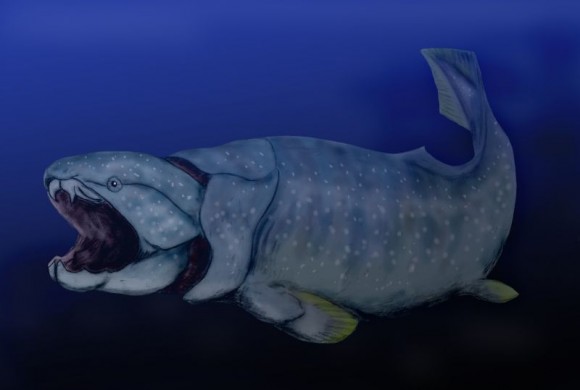 Placoderms are an extinct class of fierce-looking armored fish that evolved about 430 million years ago. The largest member of the group was a creature called Dunkleosteus, shown below. These creatures ranged in length from three to nine meters long. Whether or not they had what we’d now describe as teeth has long been the subject of intense debate among scientists. Now the verdict is in. They had teeth, and sharp ones at that. Image credit: Wikimedia Commons

The findings matter, because the development of both jaws and teeth are thought to be a pre-requisite for the evolution of vertebrates: birds, reptiles, amphibians, fishes, including us. Dr. Martin Rücklin from the University of Bristol is lead author of the study, published in Nature. Rücklin said:

The evolution of jaws and teeth is thought to be the key innovation for jawed vertebrates, essentially leading to their success.

Today, more than 99 per cent of living vertebrates have jaws and teeth. But when teeth first appeared has always been an evolutionary conundrum. Scientists’ ideas about how they evolved have been swayed by the way teeth develop in sharks, which shed their teeth throughout their lives, replacing them with new sets. Rücklin said:

While sharks are primitive creatures, they’re not the same as the primitive jawed vertebrates that existed back in the Devonian, around 380 million years ago.

This means the way that teeth develop in creatures like sharks doesn’t necessarily reflect the situation in the earliest jawed vertebrates, such as the placoderms.

Placoderms are an extinct class of fierce-looking armoured fish that evolved in the late Silurian, about 430 million years ago. They continued until the end of the Devonian when they declined dramatically, eventually going extinct. The largest member of the group was a creature called Dunkleosteus. Ranging in length from three to nine metres long, the creature would’ve been a true super-predator of the late Devonian period.

Some scientists think placoderms didn’t have teeth at all, but captured prey with gruesome scissor-like jawbones. Others are convinced the tooth-like shape of their jaws clearly shows that these fierce-looking creatures owned proper teeth.

But resolving these differences of opinion has been hampered by the inability to actually see inside fossils. Rücklin explained:

Ideas about the evolutionary development of teeth and jaws have also come from morphological studies of placoderm jaws, which preclude any kind of interior investigation. All the examples we have are valuable museum specimens that we’re just not allowed to cut up.

Rücklin’s colleague and co-author, Professor Phil Donoghue, also from the University of Bristol, realised that the only real way to solve the issue was to use some kind of technique which would let them look right inside the fossils.

So, they teamed up with colleagues at the Natural History Museum, Curtin University in Australia, the Western Australian Museum, Swiss Light Source and ETH Zurich to do just that. They used X-rays produced by the Swiss Light Source synchrotron to look inside fossils of a primitive fish called Compagopiscis croucheri from Australia. Rücklin said:

We were able to visualise every tissue, cells and growth lines within the bony jaws, allowing us to study the development of the jaws and teeth. We could then make comparisons with living vertebrates, thus demonstrating that placoderms possessed teet

This is solid evidence for the presence of teeth in these first jawed vertebrates and solves the debate on the origin of teeth.