To say Alaska has been snowy this winter is an understatement.

To say Alaska has been snowy is an understatement. In fact, residents in Anchorage, Alaska are likely saying “enough is enough!”. This 2011-2012 season, Anchorage has broke a new snowfall record. They have officially broken their record of 132.6 inches that fell during the 1954-1955 winter season with an amazing accumulation of 134.5 inches. On the Upper Hillside of Anchorage, Alaska, snowfall accumulations have ranged around 215-225 inches. A series of strong storms and extremely cold temperatures pushed through Alaska during the 2011-2012 season. While most of the United States was experiencing above average temperatures, Alaska and Europe were experiencing extremely cold temperatures. 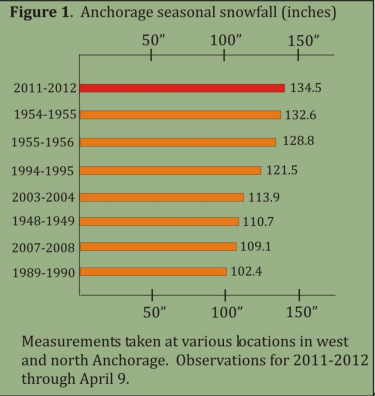 According to an article written by Dr. John Papineau from the National Weather Service in Anchorage, Alaska, snowfall totals were distributed through the core of the winter. Larger snowfall rates and accumulations, however, are more typical when the air mass at the surface is “warmer” with temperatures in the mid 20’s to low 30’s. However, a large percentage of snowfall actually fell with temperatures that were roughly 10°F or colder. Take a look at the snowfall that has fallen across Anchorage, Alaska when the temperatures were 10°F or colder:

The National Weather Service are unable to explain why more snowfall fell during the 2011-2012 snow season when temperatures were so cold. 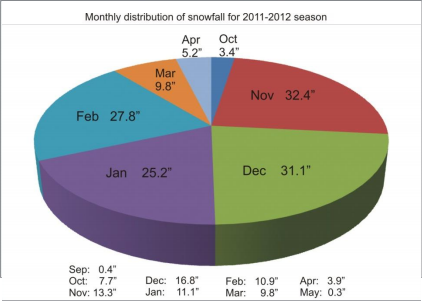 The monthly distribution of snowfall in Anchorage, Alaska for the 2011-2012 snowy season. Image Credit: NWS

There is not any correlation on whether or not La Niña and El Niño are responsible for the increase in snowfall across the area, although it does appear that La Niña years are responsible for colder temperatures. When it comes to El Niño and La Niña, the effects are typically seen further south across the mid-latitudes. Temperatures across Alaska this winter have been extremely cold with values well below zero during the heart of winter. Some areas experienced temperatures well below -60°F! 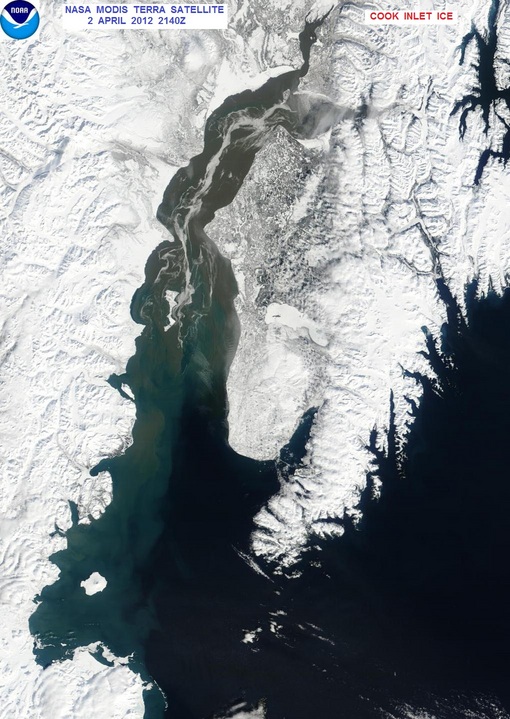 Latest satellite imagery showing the ice and snow that is covering parts of Alaska on April 2, 2012. Image Credit: NASA MODIS, NOAA POES AVHRR, and the FENGYUN

Alaska broke their 57 year old snowfall record Saturday when a storm produced 4.3 inches of snow across Anchorage on Saturday, April 7, 2012. The melting process will be slow to occur, and the snowy season is still possible for the rest of the month. With that said, it is possible the current record could get larger before the season is said and over. There are a few concerns with the melting process. During the daytime, melting can occur. However, at night, any standing water could refreeze on area roads causing dangerous driving conditions. Also, some areas could see minor flooding due to so much snow on the ground.

Bottom line: Anchorage, Alaska has received a 2011-2012 seasonal snowfall total of 134.5 inches. This record has broken the all time snowfall total set back in 1954-1955 of 132.6 inches. Unusually strong storms during the Winter of 2011-2012 helped produce large amounts of snow and extremely cold temperatures making this winter one for the record books. The snowy season will likely continue for the next few weeks, with a gradual melting process to occur as temperatures begin to gradually warm up during the spring months. Will Anchorage, Alaska see more than 134.5 inches of snow before the snow-season ends? Only time will tell!