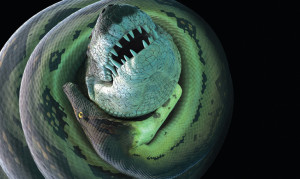 UF scientists have named a new ancient species of crocodilian, illustrated here being constricted by Titanoboa in a Smithsonian Channel documentary, Anthracosuchus balrogus, after a ferocious fictional creature (the “Balrog”) that appeared in J.R.R. Tolkien’s novel “The Lord of the Rings” and dwelled deep in the middle-Earth “Mines of Moria.”
©2012 SNI/SI Network, LLC

Thank you! Your submission has been received!
Oops! Something went wrong while submitting the form.
END_OF_DOCUMENT_TOKEN_TO_BE_REPLACED