The 93rd American Meteorological Society is hosting its annual meeting in Austin, Texas this week from January 6-10, 2013. As mentioned in a previous post, the theme for this meeting is “Taking Predictions to the Next Level: Expanding Beyond Today’s Weather, Water, and Climate Forecasting and Projections”. I attended the 13th Presidential Forum which started up the meeting on Monday, January 7, 2013. In this forum, former President Dr. Louis Uccellini welcomed everyone for attending the annual meeting and discussed the importance of going above and beyond today’s weather and seeing how it can improve through advancements in science, social media, and how meteorologists can make a bigger impact on society. There have been numerous discussions on various papers that have been written for the past couple of days. There have been sessions discussing some of the most recent weather and climate events such as Hurricane Sandy that affected parts of the Caribbean and eastern United States, warming in the Arctic, and even talks regarding the April 27, 2011 tornado outbreak that killed hundreds across Alabama and the Southeast.

Dr. Louis Uccellini asked how will we look at the advancement of atmospheric sciences in the next 20 years? In the opening remarks of the 13th Presidential Forum, one of the distinguished guests such as Dr. Alan Thorpe, European Centre for Medium-Range Weather Forecasts (ECMWF) discussed the advancements in how much weather models have been improving over the decades. He explained how the physics in the computer models are more sophisticated and understand how our atmosphere is composed and works. He explained how the horizontal resolution of the ECMWF has come a long way since 1980. The smaller the resolution, the more details the models contains so we can use it to accurately forecast weather patterns. For instance, in 1980, the ECMWF had a resolution approximately at 210 kilometers. By 1999, resolution was around 25 kilometers. As of 2011, the horizontal resolution size has improved to 16 kilometers. In the future, it is our goal to be able to improve our forecast skill past one week and be able to look ahead at weeks two, three, and even a month out in time. Weather forecasts three days out are typically reliable, but once you get past seven days, we begin to obtain more uncertainties in our forecast. When it comes to weather models and forecasting the weather, Dr. Thorpe explained that we should strive to predict a season ahead in the extra tropics. Finally, he discussed that we should reduce AND quantify uncertainties which result in more accuracy and reliability. Other guest speakers included Major General Michael Walsh, US Army Corps of Engineers, Dr. Tony Hey, Microsoft Research, and Dr. Nigel Snoad, Google Crisis Response. 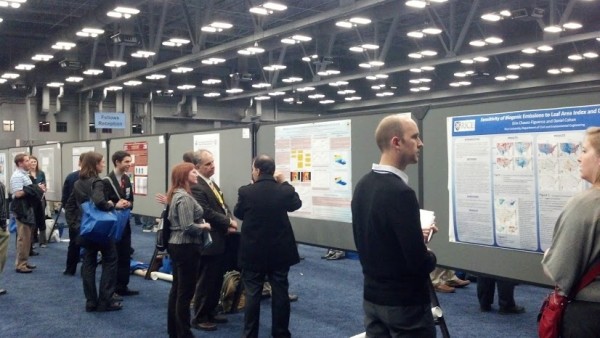 Poster presenters are explaining what they researched and what they found in their particular studies. Great way to collaborate with other scientists in the field of meteorology. Image Credit: Matt Daniel

One of the best things about the annual AMS meeting is that scientists gather together in one spot to discuss the latest on studies, research, and ideas. This collaboration is vital for the scientific committee and to further pursue advances in science and discovery. Unfortunately, there are a lot of people from the government such as local forecasters at various National Weather Service offices that were unable to attend this meeting due to budget cuts (which I could probably write another large article about on it’s own!). One of the best ways to collaborate is during the poster sessions where you can read about and meet scientists who have researched a particular subject in their field of study. These sessions are one of the many benefits of having science gatherings across the United States. Collaboration is key. 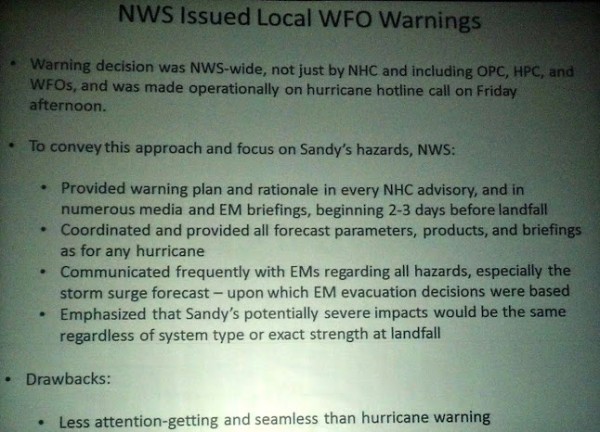 One of the slides that were presented during the Sandy Town Hall Meeting on Monday, January 7, 2013.

On Monday night, there was a Town Hall Meeting discussing the impacts of Hurricane Sandy. This meeting discussed the predictions, warnings, and societal impacts and response regarding Hurricane Sandy as it transformed into a superstorm that brought flooding and storm surge along the Northeast, blizzard conditions across West Virginia, and downed trees across many states. The speakers for this event included Dr. Louis W. Uccellini, Richard Knabb (Director of the National Hurricane Center), David Novak (HPC), Melvyn A. Shapiro (NCAR), Bryan Norcross (The Weather Channel), Jason Samenow (Washington Post), and Eric Holthaus (The Wall Street Journal). Each speaker presented interesting facts regarding Sandy. Knabb and Novak complimented the great skills the ECMWF weather model did when it came to showing the development of Sandy. While others showed the science and amazing 3D visuals, others spoke about the impacts of social media. Jason Samenow of the Capital Weather Gang said that you need to know who you trust via social media and know who is a reliable source when it comes to getting factual information. He admits that the rumors of the flooding at the stock exchange got everyone, including the Weather Channel and the National Weather Service. In a day of social media, it only takes one source to spread a rumor and make others believe it is true.

Bottom line: The 93rd American Meteorological Society Annual Meeting in Austin, Texas has been a huge success in my opinion. Many people are here bringing various studies and research to the field that allows other scientists to collaborate, share, and express their opinions. I am impressed at the increase in student activity from various local chapters across the United States. After attending a few climate change discussions, I was pleased to see such a pouring of interest among students. I would say a third of the room was filled with people age 30 or younger. Overall, I think the meeting is going smoothly and appears to be a huge success. Shout out goes to Dr. Louis Uccellini and everyone on his committee for organizing another successful annual meeting in this beautiful city of Austin, Texas.