Declining American eel populations are starting to recover after the removal of the Embrey Dam on the Rappahannock River in Virginia.

New research has found that declining American eel populations are starting to recover after the removal of the Embrey Dam on the Rappahannock River in Virginia. The research was published on July 20, 2012 in the journal Transactions of the American Fisheries Society.

Lifeform of the Week: Eels, cuter than you think

Populations of American eels are declining due to factors such as overfishing, parasitism by exotic Asian worms and habitat degradation. Population declines over the past few decades have been so severe that American eels are currently being considered for listing as a threatened species under the Endangered Species Act.

In 2004, the U.S. Army Corps of Engineers removed the Embrey Dam on the Rappahannock River in Virginia. Until the 1960s, the 6.7 meter (22 feet) high dam provided hydroelectric power to Fredericksburg, Virginia. Removal of the aging dam was hoped to benefit migrating American eels and other fish including American shad and striped bass.

Scientists from the U.S. Geological Survey, the U.S. Fish and Wildlife Service and the National Park Service decided to study the effects of dam removal on eel populations in Shenandoah National Park. They evaluated the abundance of eels at 15 different sites from 1996 to 2010, a timeframe that included years both before and after the dam was removed.

They found that the abundance of eels in headwater streams increased after the dam was removed. Increases in eel populations were observed after a time-lag of about two to four years, and amounted to a change from approximately 1.6 eels per 100 meters with the dam in place to 3.9 eels per 100 meters after the dam was removed. Overall, this amounts to a 144% percent increase in total eel abundance.

Some of the sites with returning eels were located in streams up to 150 kilometers (93 miles) away from the dam.

Nathaniel Hitt, a biologist with the U.S. Geological Survey and lead author of the study, commented on the findings in a press release. He said:

Our study shows that the benefits of dam removal can extend far upstream. American eels have been in decline for decades and so we’re delighted to see them begin to return in abundance to their native streams.

In addition, the scientists discovered that many of the returning eels were somewhat smaller in size. This might indicate that smaller eels have a more difficult time navigating around dams. 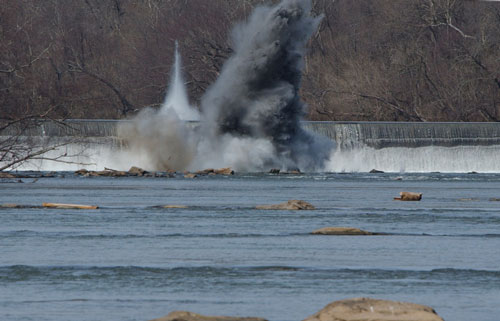 Alan Weaver, a fish passage coordinator for the Virginia Department of Game and Inland Fisheries who was not part of the study, also commented on the findings in the press release. He said:

This study demonstrates that multiple benefits can be realized by removing obsolete dams such as Embrey. Shad, herring and striped bass are also using reopened habitat on the Rappahannock River, so it’s exciting to see a growing number of species benefitting from dam removal in Virginia.

Bottom line: New research has found that declining American eel populations are starting to recover after the removal of the Embrey Dam on the Rappahannock River in Virginia. The research was published on July 20, 2012 in the journal Transactions of the American Fisheries Society

Jeff Mount on what it really means to restore a river

David Freyberg on costs and benefits of dams in 21st century