Powerful footage from the Philippines, taken when Super Typhoon Haiyan hit on November 8. The video shows how destructive storm surge can be.

When we think of hurricanes (typhoons / tropical cyclones), we typically think of strong winds. However, the biggest threat from these storms is the storm surge and the inland flooding. Water can be powerful and destructive. We have seen many times in history of how destructive water can be on cities, the coast, and even on the inside of your home. For instance, Hurricane Katrina is not known for the strong winds that hit parts of the Gulf Coast. It was the incredible storm surge that resulted in so much damage. Storm surge and flooding can result in major loss of life. If you do not believe me, check out the Japanese tsunami or Hurricane Sandy. And also check out this incredible video that has been circulating social media this past week. It’s from Super Typhoon Haiyan, which struck the Philippines and killed roughly 4,000 people. Its powerful storm surge swallowed cities whole.

Super Typhoon Haiyan provided yet another example of how water can do so much damage. From Reuters:

Newly released amateur video footage shows how a storm surge from typhoon Haiyan destroys a house in mere seconds. Filmed by a charity worker from Plan International on 8 November on the island of Samar in the Philippines, this video shows a tsunami-like wave washing away the house in Hernani. 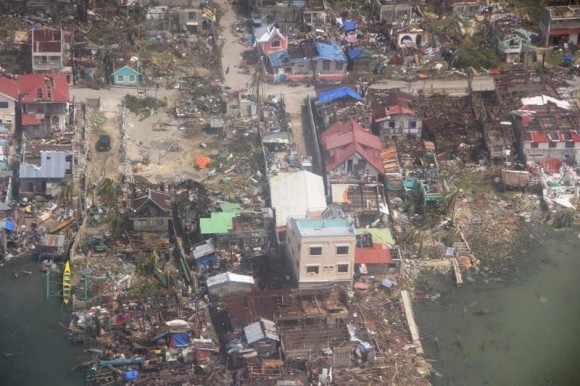 Bottom line: Storm surge is extremely powerful and destructive. If you don’t believe me, simply watch the footage that came out of the Philippines when Super Typhoon Haiyan hit back on November 8, 2013.