Recent dust storms – aka haboobs – in Arizona. Check out these wild videos and amazing images of these storms!

A series of dust storms, also known as haboobs, have occurred across parts of Arizona the past few weeks. These storms are known to create traveling problems and respiratory problems for those caught in these storms as dust practically consumes the air making visibility low. During the summer months in the southwest United States, the “monsoonal” flow can provide a lot of rain for parts of Arizona, which can be a good thing and bad thing. If some storms develop away from a dry area, then the outflow and winds from that storm can produce dust storms in the region. We’ll go in more detail on how they form shortly. A lot of great images and video have been posted online from various sources regarding these dust storms. Check them out!

In the images below, Ryan Behnke wrote:

The wind gusts blew my sunglasses off on my motorcycle ride home with about 20 miles to go…I pulled over and eventually went slowly enough to exit and found my way to buy more eye protection from the first gas station I could get to. The storm approached perfectly perpendicular to the freeway…it did not feel/look/taste very good from within that cloud of dust! Glad I didn’t wait it out…would have been breathing that for at least an hour. Then the rain came. It was quite sunny when I started home minutes earlier. 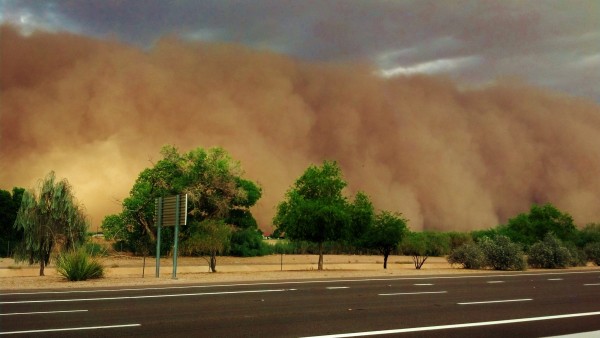 How do these dust storms form? 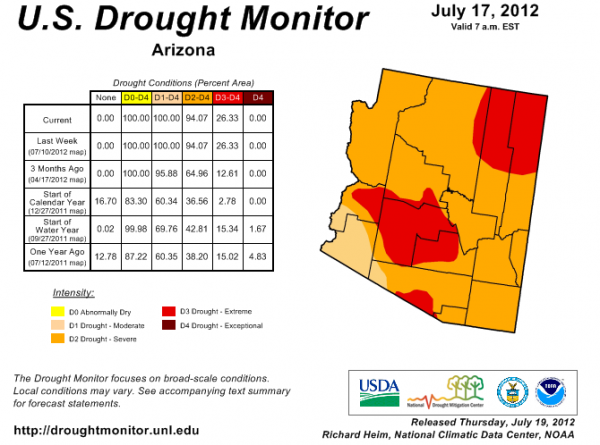 Arizona drought for July 17, 2012. Over 94% of the state is experiencing severe or worse drought. Image Credit: USDA/NOAA

Dust storms, also known as haboobs, can form from weakening thunderstorms that are pushed by the winds aloft into lower deserts during the evening hours. The rain can falls and virtually evaporates into the hot, dry desert air. As this process occurs, it cools the air and accelerates it to the surface. When this occurs, storms can create microbursts or downbursts. These downward winds, which can spread one or two miles across, can produce winds speeds over 70 miles per hour, which is strong enough as a weak tornado (EF-0). These strong, downward forcing winds strike the desert valley floors, and when this occurs, dust gets picked up into the air and is pushed in the direction the winds are traveling at the surface. These storms can spread outwards at great heights and travel dozens of miles away from the collapsing thunderstorm. Visibilities can drop near zero and most residents typically have to go inside and wait out the storm. With nearly 95 percent of Arizona experiencing severe drought or worse, these dust storms are becoming very common during the summer months.

Picture of the haboob in Arizona on July 21, 2012. Image Credit: Ryan Behnke

This time lapse was taken on July 21, 2012 near Phoenix, Arizona on Interstate 10 and Queen Creek looking northeast. This was recorded by Mike Olbinski:

In this video, a family records the dust storm pushing into their neighborhood in Mesa, Arizona. Check out this dust storm pushing into East Mesa, Arizona: Bottom line: Dust storms, also known as haboobs, occur when winds from dying thunderstorms push downward and pick up sand and dirt across the deserts areas. These winds are also known as microbursts and downbursts, and they create these dust storms that push outwards and spread low visibilities across large areas. Arizona has experience a few haboobs the past seven to ten days in the middle of July 2012. With nearly 95 percent of the state in severe drought, it does not take much to see these storms develop. In ways, we are rivaling the dust bowl that occurred in the 1930s in the United States.