Waterspouts are essentially tornadoes that form over water. They can and do form over all the world’s oceans. In the U.S., they’re most common near the Florida Keys and in the Gulf of Mexico. 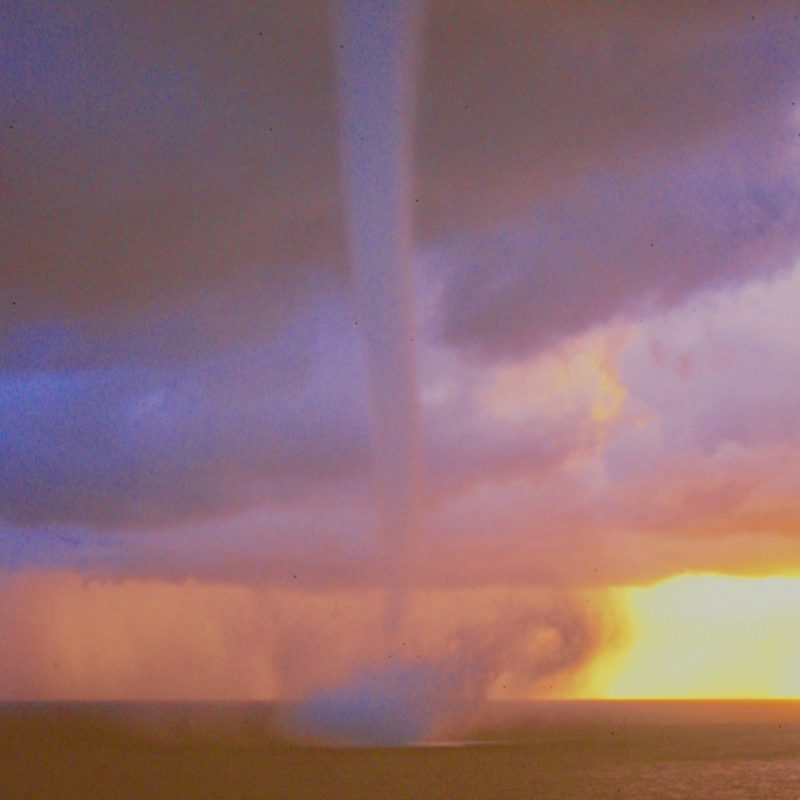 View at EarthSky Community Photos. | Mark Rutkowski said on July 3, 2020, that he caught this sunrise waterspout in the Atlantic Ocean, near Miami. Thank you, Mark!

You’ve likely heard the term waterspout. In general terms, a waterspout is just a tornado that forms over an open body of water. A tornado over an ocean, lake – or even a river – is considered to be a waterspout. Waterspouts are typically weaker than most tornadoes. They’re usually short-lived. But they can be destructive. In this post, we’ll look at some images and videos of waterspouts and learn more about how they form.

When and where do waterspouts form?

Waterspouts typically occur in tropical regions, but they can form almost anywhere. They can occur in the Gulf of Mexico, the Great Lakes, western coast of Europe, Mediterranean Sea, and the Baltic Sea. They’re common throughout the world. In the U.S., the most common place to see waterspouts is along the Florida Keys and in the Gulf of Mexico. They typically form during the late spring and summer months, with tornadic waterspouts generally forming after 2 p.m. in the afternoon. Florida is considered to be the most prone area to see tornadoes in the United States. However, many of them end up being waterspouts. It’s not unusual to see 400 to 500 waterspouts a year in this area, and many that go unreported. In rare instances, more than one waterspout can form from a storm offshore.

Waterspouts are typically weaker than tornadoes, but as seen in the videos below, they can still cause a decent amount of damage. If you’re boating in the ocean, you’ll want to monitor the weather to avoid waterspouts. For instance, you might avoid being in the ocean around the Florida Keys in the afternoon or evening, when there’s a chance for thunderstorms at the coast. If you’re on a boat or ship and a waterspout develops, try to navigate around the area by going at right angles to its path. The National Oceanic and Atmospheric Administration (NOAA) recommends that those on boats or ships monitor special marine warnings issued by the National Weather Service.

And of course it’s highly recommended that you avoid navigating through a waterspout. They can cause decent damage, and could hurt or kill you.

Here is a video of two waterspouts forming off Honolulu, Hawaii back in May of 2011:

There are two types of waterspouts we commonly see: A fair weather waterspout and a tornadic waterspout.

Waterspout in the Gulf of Mexico in 2012. Image via NWS Collection.

There are five stages that occur for fair weather waterspouts:

Waterspout over the Gulf of Mexico in 2018. Image via National Weather Service/ Greg O’Neal of Hiram, Georgia.

Tornadic waterspouts are simply tornadoes that form over water or move from land to water. They typically occur with afternoon and evening thunderstorms. You need two main ingredients for tornadic waterspouts: warm, moist air and an unstable atmosphere. Trade winds from boundaries can also influence the formation of this kind of waterspout.

Supercell thunderstorms are what produce large, violent tornadoes. In non-supercell thunderstorms – like those that produce waterspouts – tornadoes that typically form are due to a boundary layer. Spin ups that do occur in the storm are typically short and do not last long. Obviously, every waterspout is different and some could last longer than others.

Check out the amazing photo and video below of a waterspout pushing ashore on Grand Isle, Louisiana, on May 8, 2012. There’s spectacular footage of multiple waterspouts and a tornado hitting the coast around four minutes into the video. Scary stuff! FYI: Do not try this at home! If you know a tornado is about to strike near you, go inside and take shelter. It’s not the tornado itself that will hurt or kill you. Instead, it’s the flying debris in the air that’s dangerous.

Grand Isle, Louisiana, pair of waterspouts taken on May 8, 2012. See these same waterspouts in the video below. Image via WVUE-TV.

Bottom line: Waterspouts can be harmless as long as you understand and avoid them. If you live along the coast, you should treat all waterspouts as you would tornadoes on land, and assume they might come ashore. Waterspouts form off non-supercell thunderstorms, and typically are short-lived. Some waterspouts can reach the coastline and become tornadoes, so it is important for everyone to monitor the weather as it evolves. Waterspouts can occur anywhere in the world, and the most common place they form in the United States is along the Florida Keys and in the Gulf of Mexico.