Here in mid-August 2011, the tropics in the Atlantic Ocean are now heating up and models are showing development of numerous storms.

After a week of relatively quiet weather for the 2011 Atlantic hurricane season, the tropics are now heating up and models are showing development of numerous storms.  Will these storms impact anyone in North America in the coming weeks? It does not matter about the number of storms. What matters is the track of each storm – and whether the storm impacts a population. 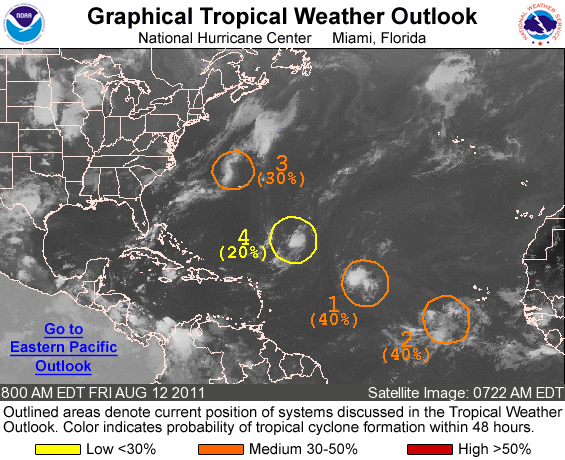 As you can see in the map above, the National Hurricane Center (NHC) has four areas of interest in the Atlantic Ocean at this time. First, there is an area of thunderstorms located 160 miles west-northwest of Bermuda – Area 3 on the map above – that the NHC is providing a 30% probability (medium chance) for development in the next 48 hours. This system should not be a threat to anyone because a stalled out front will absorb this area of unsettled weather and take it northeast out to sea. 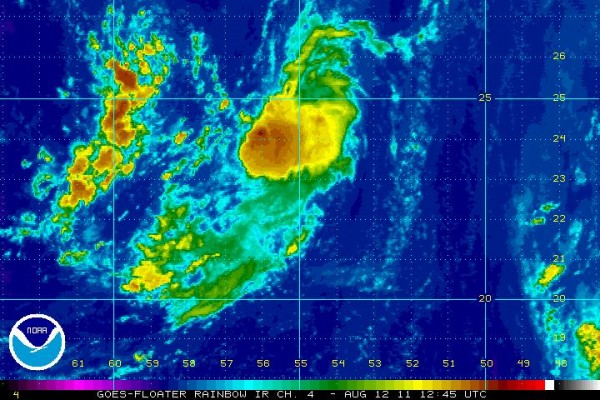 Secondly, there’s another system called 94L – Area 4 on the map at the top of this post – circled with a 20% probability (low chance) for development about 700 miles northeast of the Leeward Islands. This system is moving to the west-southwest at the speed of 10 miles per hour (mph). This system is very close to home, and the NAM model is showing a weak area of low pressure developing within the next two to three days.  My initials thoughts for this system is that it will likely feel the effects of a large trough that should push into the eastern United States this weekend. When this happens, any development that does occur will likely be steered to the northeast away from the United States. However, this system is one to keep an eye on since it is so close to home.  Here are the possible tracks for 94L from various models:

Note: The National Hurricane Center numbers areas of interest 90-99, and the “L” stands for Atlantic.  Once 99L has been use, they simply recycle the numbers back to 90 and start over again.  It allows us to become more specific about disorganized storms in the Atlantic, and it also allows the models to recognize an area of unsettled weather.

92L – Area 1 on the map at the top of this post – is currently approximately 1,175 miles east of the northern Leeward Islands out in the eastern Atlantic Ocean. 92L is moving west-northwest around 20 mph.  The NHC has given 92L a 40% probability (medium chance) to develop into a tropical depression within the next 48 hours.  92L begins the Cape Verde system of storms.  It is a part of the “wave train” of storms that emerge off the northwest coast of Africa and push westward into the Atlantic. Cape Verde storms are considered to be the most dangerous systems because they have plenty of time over water to develop and strengthen.  As of now, it looks like development will be slow for 92L because it is fighting a lot of dry air from the Saharan Air Layer.  As I stated in older posts, dry air is bad for tropical development.  Once 92L fights this dry air, it could develop into a tropical storm.  The track for this system is not clear, but we definitely have a better grasp on the general movement for this storm.  92L is much further north than 93L (which we will discuss shortly), and the track of the storm will likely move northwest and eventually recurve out to sea.   Here is the projected track for 92 L:

Here is a map of the Saharan Air Layer (SAL) by the University of Wisconsin-Madison Tropical page.  The red/orange colors depict the SAL in the Atlantic Ocean.  Notice the SAL is north and west of 92L, which will prevent fast development:

The biggest area of concern is 93L – Area 2 on the map at the top of this post – which is 450 miles southwest of the Cape Verde Islands at this time.  The NHC has given 93L a 40% probability (medium chance) to develop into a depression within the next 48 hours as it moves 15-20 mph to the west.  The GFS model has had a huge circle for this storm in regards to further development.

Infrared image of 93L in the eastern Atlantic Ocean on August 12, 2011. Image Credit: University of Wisconsin-Madison

What makes 93L a bigger threat?

First of all, 93L is further south in latitude.  If a storm is further south, than it is likely that the storm will move westward than northwestward. (most of the time) Secondly, 93L  has more moisture to work with.  In fact, 92L is moistening up the atmosphere in front of 93L.  In a way, it is like 92L is sacrificing itself by fighting the SAL layer which in return allows 93L to have more favorable conditions to develop.

Here’s the projected path for 93L:

The GFS model has been really aggressive with 93L and showing various tracks.  Last night, the 18Z model run showed a possible hurricane making landfall across the Carolina’s (as of now, the GFS model shows 93L going out to sea):

I had a reader ask:

What are the factors that control the rotational motion of a cyclone?  What makes it go N,S,E.W?

This is an excellent question!  Steering of tropical cyclones are easily influenced on the synoptic level.  When we say synoptic, we look at the overall big picture.  Troughs (low pressure systems) and ridges (high pressure systems) heavily influence the track of tropical cyclones. High pressure moves clockwise in the northern hemisphere (opposite in the southern hemisphere), and low pressure moves counterclockwise in the northern hemisphere.   Typically, we have a strong area of high pressure in the Atlantic ocean that helps steer storms to the west.  If an area of high pressure retreats to the east and a system finds a weakness to the north, then the system might pull further northwest.  If a trough digs in the United States, it eventually pulls systems up to the northeast.

Tropical cyclone feeling a weakness between low and high pressure which pulls the system to the northwest and eventually northeast out to sea.

However, the pattern is hinting at a more dangerous setup where areas of low pressure off the eastern coast is nonexistent or further north, and the ridge of high pressure pushes further west.  Think of an area of high pressure as a force field or massive bubble.  You cannot hit the bubble, so you have to go around it.

Steering of a tropical cyclone by a huge ridge of high pressure which is pushed further west. This scenario would make the United States vulnerable for a landfalling tropical cyclone.

In the case of 93L, we have to figure out how far west this area of high pressure will move.  If it follows a path similar to the image above, then the United States could have a direct hit. This is where forecasting can be difficult.  Will this pattern hold true around August 20-24, 2011? Or, will we see a trough push into the eastern United States, and possibly deflect storms away from our coasts?  You also have to take into effect dry air, warm waters, wind shear when it comes to intensity forecasts too. Stronger storms tend to move poleward.  Weaker storms stay further south.  It’s all a wait and see.

Overall, the tropics are becoming extremely active, and we need to watch these systems.  93L is the biggest threat of them all, and could potentially impact the Leeward Islands, the Caribbean, and possibly the United States.

Bottom line:  92L and 93L have a decent chance to become named storms (Franklin and Gert).  I am not forecasting a hurricane hitting the United States.  I am saying that the pattern could become more favorable for an event such as this to occur. Everyone along the southeastern United States should keep an eye on these systems.  It is about two weeks away from us, so we have plenty of time to monitor the situation.   If you live along the coasts, you should already have a hurricane safety/evacuation plan. If not, I recommend preparing now instead of waiting for later.