Active weather pattern this week across the United States

A large trough will dig in to the eastern U.S., bringing very chilly air and stormy, wet weather across the eastern coast.

For the past five days, many of our reliable model runs have showed hints of a large trough, or extended area of low pressure, digging and pushing south across the eastern portions of the United States. With such a high amplitude trough pushing south to the southeast United States, the first glimpse of very chilly weather arrives for many people. With so many dynamics in play, there will be a lot of question marks regarding the potential for severe weather across the southeastern coast.

To add on to the amplified weather pattern, an area of low pressure in the south-central Gulf of Mexico has a 10 percent probability to develop into a tropical depression in the next 24 to 48 hours. Once this trough moves south, it will likely influence the track of this developing area of low pressure and push it into Florida.  Meanwhile, a ridge of high pressure will bring sunny and warm conditions across the southwestern portions of the United States.  In other words, a lot of playmakers in the weather department this week. Where should we begin?

Overall look at what is approaching the United States in the next 24 hours. Model run of the GFS 0z.

As of now, the severe weather impacts appear to be low. First of all, the area of low pressure in the Gulf and another low associated with the strong cold front will enhance the spin and shear in the atmosphere, which could aid in thunderstorm development.  However, moisture could be limited across portions of the southeast, especially around northern Alabama and north Georgia. The area of low pressure in the Gulf will hog all of this moisture and carry it up the coast Tuesday, Wednesday, and into Thursday. Another item we focus on is the instability in the atmosphere.  The more unstable it becomes, the greater chances we can see strong thunderstorm development.  Based on the model runs such as the European, GFS, and NAM, instability appears rather low across most of the southeast.  There should be plenty of wind shear and spin in the atmosphere to help sustain thunderstorms and possibly create a tornado or two along the southeast coast. A cold front with a strong area of low pressure picking up a tropical low will be enough to warrant this slight risk for these areas.  The Storm Prediction Center (SPC) does see an area of organized severe weather to warrant a slight risk for portions of the southeast coastline from Florida into North Carolina for today (October 18, 2011).

Storm Prediction Center believes there is a slight risk of severe thunderstorms along the coast of Florida north into North Carolina on October 18, 2011.

Once the tropical low gets pulled northward toward New England, the area of low pressure will become non-tropical and begin to strengthen.  It will bring in more moisture and wind for a good bit of the East Coast on Wednesday and Thursday.  As of now, the low does not have enough time to become a named system due to high wind shear in the area, which disrupts the organization of the storm.  Speaking of the tropical low called 95L, here’s what the National Hurricane Center has to say about it: 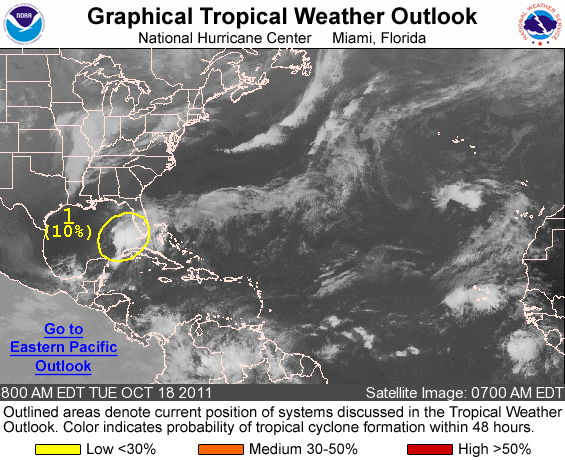 National Hurricane Center is giving a 10 percent chance for this area of low pressure to develop into a tropical depression in the next 24 to 48 hours.

A BROAD…ELONGATED…AREA OF LOW PRESSURE LOCATED OVER THE CENTRAL GULF OF MEXICO CONTINUES TO PRODUCE A LARGE AREA OF HEAVY SHOWERS AND THUNDERSTORMS FROM WESTERN CUBA NORTHEASTWARD ACROSS FLORIDA. SURFACE OBSERVATIONS INDICATE THAT WINDS TO TROPICAL STORM FORCE ARE STILL OCCURRING OVER PORTIONS OF THE SOUTHEASTERN GULF OF MEXICO. THIS LOW IS EXPECTED TO MERGE WITH A COLD FRONT…AND THE POTENTIAL FOR DEVELOPMENT HAS DECREASED. THIS SYSTEM HAS A LOW CHANCE…10 PERCENT…OF BECOMING A TROPICAL CYCLONE DURING THE NEXT 48 HOURS AS IT MOVES NORTH-NORTHEASTWARD AT 10 TO 15 MPH LATER TODAY. LOCALLY HEAVY RAINFALL…GUSTY WINDS…AND POSSIBLE SEVERE WEATHER OVER THE FLORIDA KEYS…THE FLORIDA PENINSULA…SOUTHERN GEORGIA…AND COASTAL SECTIONS OF THE CAROLINAS ARE EXPECTED OVER THE NEXT DAY OR SO. FOR INFORMATION SPECIFIC TO YOUR AREA PLEASE SEE STATEMENTS ISSUED BY YOUR LOCAL NATIONAL WEATHER SERVICE FORECAST OFFICE. 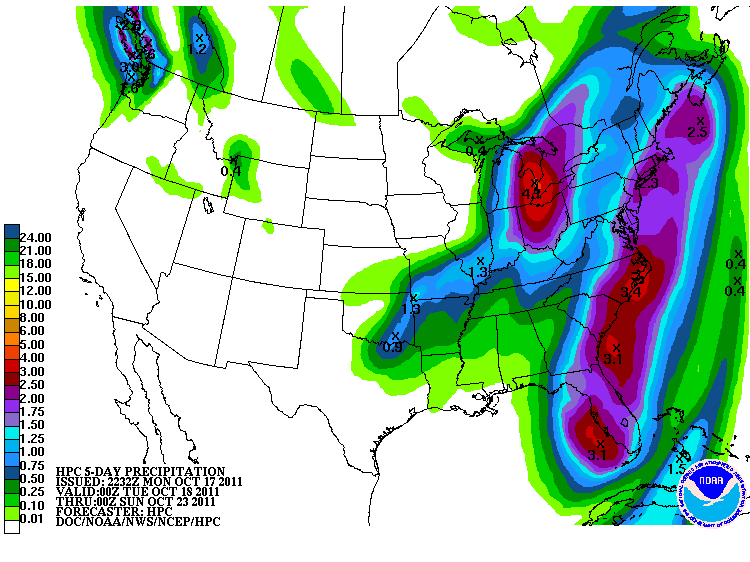 HPC rainfall totals for the next five days across the United States.

Nasty weather will hammer New England with a lot of heavy rain and strong winds as the system pushes to the northeast.  The system will bring a lot of cold air along the Mississippi River and points eastward, with temperatures below average for this time of year, especially across the southern United States. On October 17, temperatures are well above average with highs in the mid to upper 80’s across most of the Southeast.  By Wednesday, high temperatures will likely stay or drop into the 50’s for Birmingham, Memphis, and Atlanta.  Many areas could also see their first frost or freeze of the season as cold Canadian air moves south on Thursday or Friday morning.

The coldest air of the season will be pushing south into the eastern half of the United States on Tuesday and Wednesday of this week.

Overall, a significant weather pattern is shaping up for the eastern United States.  A large trough will dig into the east bringing very chilly air and stormy, wet weather across the eastern coast.  Strong winds are very likely across the Great Lakes, Northeast, and the Southeast as cold air advection moves into the area. The cold front will pull a tropical low in the Gulf northeastward which will only provide more moisture for the east coast.  Severe weather is possible across the east coast, as there should be plenty of spin and shear in the atmosphere due to the tropical low pushing northeast. Minor flooding is possible in New England, especially since the ground is already saturated from the recent rains in the area in the past few months. Meanwhile, the southwestern portions of the United States will see a ridge of high pressure building into the region, providing them with sunshine and warmer weather.  Never a dull day in the weather department!