Active weather for the middle of October

Meteorological models see rain ahead for dry Texas and Oklahoma and for soaked Northeast – and maybe tropical storms in Gulf and Caribbean.

In this post, I am going to discuss possible weather events that could happen in the next seven days across the United States.  It looks like it could be an active week ahead based on the European Center for Medium-Range Weather Forecasts (ECMWF) and the Global Forecast System (GFS) model runs.  Weather in 2011 across the United States has been rather unbalanced for portions of the country. Many areas, such as the Northeast and Midwest, have seen too much rain, while other areas such as Texas have barely seen a drop. For parts of Texas, it looks like rain could be heading their way this weekend.  For the Northeast, your chances for rain should occur towards the end of next week. Meanwhile, unsettled weather is likely for Florida.

Let’s look at the five-day rainfall forecast from the Hydrometeorological Prediction Center (HPC):

HPC forecasts heavy rain across the southeast coast and parts of Oklahoma and central Texas for the next five days. Image Credit: HPC

If the HPC’s forecast is correct, we are looking at some of the best chances of relief we have seen across drought-stricken Oklahoma and Texas. HPC has a bullseye of a chance to see 10.8 inches of rain for the next five days along the border of Oklahoma and Texas. Many areas will likely see one to three inches of rain, with other fortunate areas receiving nearly five inches of rain.  A low pressure system associated with a frontal boundary will push into the central United States this weekend which will provide beneficial rains.  The eastern United States has been enjoying beautiful fall weather as a ridge of high pressure has been anchored over the area the past week.

In one of my previous posts, I mentioned the possibility for the tropics to become active again across the Caribbean and the Gulf of Mexico in the middle of October, because of the Madden-Julian Oscillation (MJO) pushing into our region.

The MJO is a large-scale atmospheric circulation that propagates in an easterly direction from its origins in the Indian and Pacific oceans.  It can show areas of favorable development in regard to lowering pressures and increased convection. Originally, it was located across the western Pacific ocean, where storm development was rather high across the Philippines. Now, the MJO is currently pushing into the eastern Pacific.  Need proof?  The eastern Pacific is ramping up as we speak: 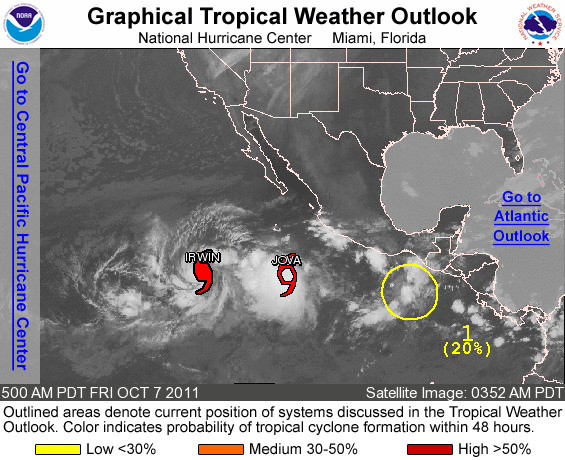 One hurricane, one tropical storm, and another area for possible development across the eastern Pacific ocean. Image Credit: NHC

In the eastern Pacific, we have Hurricane Irwin, Tropical Storm Jova, and another area the National Hurricane Center (NHC) is watching for possible development in the next few days. Irwin and Jova will have to be watched closely, because forecasts show both storms possibly moving east into Mexico by early next week.  Heavy rains could affect portions of Mexico, so keep an eye out! The MJO will push east, and tropical development will become more favorable for the Gulf of Mexico and the Caribbean.

The ECMWF and GFS models are hinting at an area of low pressure forming either across the eastern Gulf of Mexico or eastern coast of Florida.  Let’s look at each model run, starting with the ECMWF.  All of these images can be found on Allan Huffman’s Weather Model and Data Page, which is an excellent website for model runs.

The GFS model is showing a tropical or subtropical (showing characteristics of both a tropical and non-tropical system) system developing off the coast of Florida and into Georgia. For now, it is safe to say that an area of low pressure will form, and rainy/windy weather is likely for the eastern coast of Florida.  If you look at the HPC five-day rain total picture above, you can see that a lot of rain – around five to ten inches – is possible across the Sunshine State.

The area of low pressure that developed around Florida will push out to the northeast around October 13, 2011.

By October 13, 2011, the GFS model shows the system that had been impacting the Southeast pushing out into the Atlantic toward the northeast United States. It is very possible that New England could experience more heavy rain and flooding if this system pushes into their area next week. At this point, we are already too far out in time to make an exact weather prediction. For instance, many things can change between now (October 6) and then.  The system near Florida could be stronger or weaker than what is shown in the GFS model. It is also possible for the system to develop farther east or west of where the model shows development.

6z GFS model run showing a strong tropical storm/hurricane in the Gulf of Mexico on October 18, 2011.

By October 18, 2011, the 6z GFS run shows a developing tropical system in the Gulf of Mexico.  Once again, this is really far out in time, and things can and will change from now until then. However, the biggest thing to remember about this image is that the GFS shows tropical development is possible across the Caribbean and Gulf of Mexico during this time period, which makes sense because of the MJO pushing into this area around the same time.  The forecast is for pressures to lower and for convection to increase across this region.  With the country transitioning into winter, systems from Canada will push south and east, and will likely be the steering mechanism to push any tropical systems out to the northeast. Remember, jet streams and cold fronts steer tropical systems.

6z GFS shows a trough pushing into the eastern United States, which would ‘grab’ the tropical system in the Gulf and push it into New England around October 21, 2011.

As we move further into fictional model runs, a trough is shown to pick up the tropical system in the Gulf and push it into New England.  Since this is so far out, I would not bet that this scenario will occur.  As I said above, the GFS is simply telling us that tropical development is possible, and the United States could be affected in the middle of October.

Now, let’s take a look at the ECMWF model:

The ECMWF shows a weaker system trying to develop around Florida on October 12.  It is not showing a defined system, but regardless of the strength of the storm, rain and wind will be likely across Florida.

Area of low pressure forms and pushes northeast into New England, which could bring a heavy rain threat across the region on October 14, 2011.

The ECMWF model has a western bias, while the GFS model shows an eastern bias.  In other words, ECMWF shows the tropical system farther west, affecting New England next week – October 14, 2011.  In this model run, heavy rains and wind occur in areas that do not need them.  If this scenario verifies, which is a possibility, New England could see more flash flooding.

0z ECMWF hinting at another system developing in the Caribbean around October 17, 2011.

Toward the end of the ECMWF run, the model hints at another area of tropical development across the western Caribbean on October 17, 2011.

Bottom line:  Central Texas and Oklahoma will see beneficial rains this weekend as an area of low pressure moves east. Severe weather is possible across these areas, with wind and hail being the primary threats.  A tropical system will likely develop around the Florida area or eastern Gulf of Mexico and spread moisture to the northeast.  Expect rainy and windy weather across Florida, with rain pushing north toward the beginning of the week. Depending on the strength and track of this system, New England could see heavy rain. With the MJO pushing into the Caribbean and Gulf of Mexico by the middle of October, the ingredients for tropical development will all be in place.  Warm waters, lowering pressures, and increased convection all hint at higher probabilities of a tropical system developing by the middle of October.  Not only does the MJO show us this, but even our reliable models, ECMWF and the GFS, show something brewing in the tropics.  Either way, it looks like the 2011 Atlantic hurricane season refuses to settle down.  Remember, the Atlantic hurricane season does not officially end until November 30. Regardless of what happens, EarthSky will keep you updated!