It has been a very active weather pattern across a majority of the United States this past week. Constant training of storms producing heavy rain in Iowa and Illinois on July 27-28, 2011 caused major flash flooding problems. Dubuque, Iowa recorded 10.62 inches of rain, which broke a 24 hour rainfall record of 8.96 inches set back on August 21-22, 2002. Many areas were evacuated as flooding rose in just a small amount of time.  Several basements and vehicles were flooded, and many streets and bridges were closed as the rain continued throughout the evening of July 27. 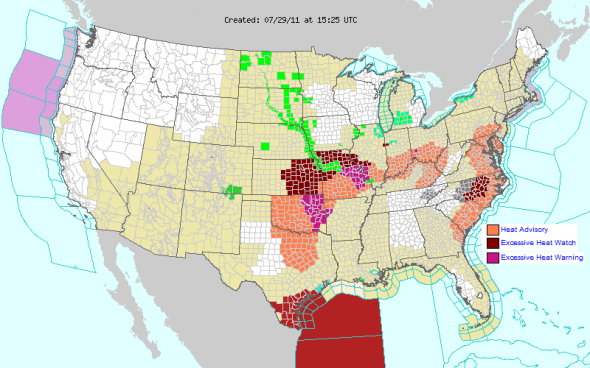 Heat advisories are posted throughout the Central United States, Ohio Valley, and the eastern coast.

The heat across the United States continues as high pressure settles over the eastern United States. Heat advisories have been issued for portions of Texas, Oklahoma, Missouri, Illinois, Indiana, Ohio, Kentucky, West Virginia, and a decent portion of the eastern coast of the United States.  Many areas could be flirting with record high temperatures today, including Washington, DC. Meanwhile, Texas continues to remain dry and hot.  Dallas, Texas has had 27 consecutive days over 100 F from July 2 – 28, 2011.  This statistic makes it the third longest consecutive 100 F day for Dallas.  The longest consecutive 100 F days occurred on June 23 – August 3, 1980 (42 days).  The National Weather Service at Dallas/Fort Worth, Texas forecasts temperatures above 100 F for the remainder of the weekend. By Monday and Tuesday, temperatures are forecasted to rise into the mid-100s. 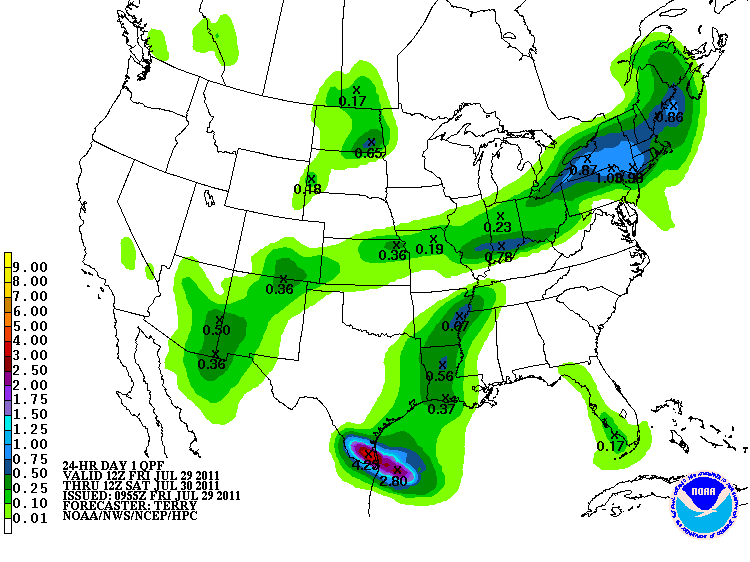 Rainfall estimates for the United States on July 29, 2011 from the HPC

In the tropics, Tropical Storm Don remains as a 50 mph storm with a pressure of 1004 mb. Don is currently pushing WNW into portions of Southern Texas, and will likely make landfall south of the Corpus Christi area Friday night.  Fortunately, dry air and northerly wind shear has prevented this system from developing rapidly.  However, the shear has pushed the convection of Don further south, so parts of Texas might not see as much rainfall as expected.  The Hydrometeorological Prediction Center (HPC) (image above) is forecasting two to four inches to areas south of Corpus Christi into Brownsville.  This will definitely help the drought situation for these areas, but will not help areas to the north. The ECMWF (European Model) is forecasting lowering pressures across the entire Atlantic Basin for the month of August.  In the image above, green colors represent lower pressure readings.  Lowering pressures means more storms.  As of now, we are above average in named storms for this time of year. August and September are the peak months for tropical activity in the Atlantic.

The biggest concern for now is a new tropical wave in the central Atlantic designated as 91L.  The NHC is giving 91L a 30% (medium) chance to develop within the next 48 hours.  Many of the models show development over the weekend, and will likely become Emily.  I believe development will be faster than what we saw with Don.  Everyone in the Caribbean and the eastern coast of the United States should keep a close eye on this system as it continues to move westward.

I will have more information Monday or Tuesday regarding 91L (assuming it develops).  Have a fantastic weekend!