Hear the whale with a human-like voice

Posted by Eleanor Imster and Deborah Byrd in Earth | March 2, 2013

Researchers working near him thought another person was talking and were surprised to find the voice was coming from the whale.

Our observations suggest that the whale had to modify its vocal mechanics in order to make the speech-like sounds. Such obvious effort suggests motivation for contact.

To hear the sound of NOC’s voice, click play below:

Ridway and others thought they were hearing two people talking, just out of the range of their understanding, when they first noticed NOC’s voice coming from a whale and dolphin enclosure in 1984. Prior to that time, there’s been anecdotal reports of whales sounding like humans, but no real evidence or analysis. Ridway and his colleagues recorded the whale’s sounds to reveal a rhythm similar to human speech and fundamental frequencies several octaves lower than typical whale sounds, much closer to that of the human voice, they said. The researchers reported their findings in the October 23 issue of the journal Current Biology. 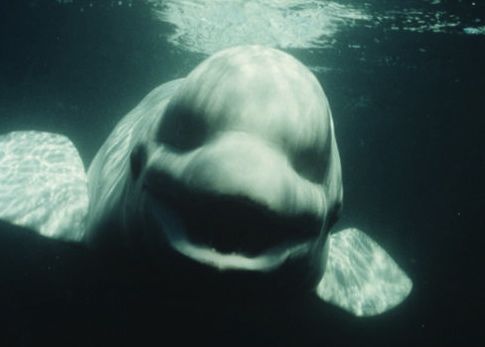 This male beluga whale named NOC can mimic the voices of humans, according to scientists reporting in the October 23, 2012 issue of the journal Current Biology. Image via U.S. Navy.

The scientists said NOC had lived among dolphins and other white whales and had often been in the presence of humans.

They said whales make sounds via their nasal tract, not in the larynx as humans do. They reported:

To make those human-like sounds, NOC had to vary the pressure in his nasal tract while making other muscular adjustments and inflating the vestibular sac in his blowhole. In other words, it wasn’t easy.

Read more about NOC at EurekAlert

Bottom line: Scientists at the National Marine Mammal Foundation published an acoustic analysis of the voice of NOC, a beluga, or white, whale, whose can make a human-like sound.