A rainforest in Antarctica during the age of dinosaurs

A temperate rainforest once flourished in Western Antarctica, just 560 miles from the South Pole, 90 million years ago.

Scientists have discovered remnants of a swampy temperate rainforest that thrived in Antarctica about 90 million years ago. They were surprised to find fossil remnants of this forest in a sediment core sample retrieved in February 2017 from the ocean floor in the Amundsen Sea off the coast of West Antarctica. This sample contained ancient forest soil with an abundance of fossilized plant pollen and spores. CT scans revealed a dense network of fossilized plant roots. What’s astonishing about this discovery is its location. Ninety million years ago, this West Antarctic forest was just 560 miles (900 km) from the then-South Pole. Yet its climate was surprisingly mild.

The scientists think these mild conditions – an annual mean temperature of about 54 degrees Fahrenheit (12 degrees Celsius) – were possible because there was no significant ice sheet across Antarctica. It appears that carbon dioxide concentrations were much higher than previously thought. Their findings were published in the April 1, 2020, issue of the peer-reviewed journal Nature. 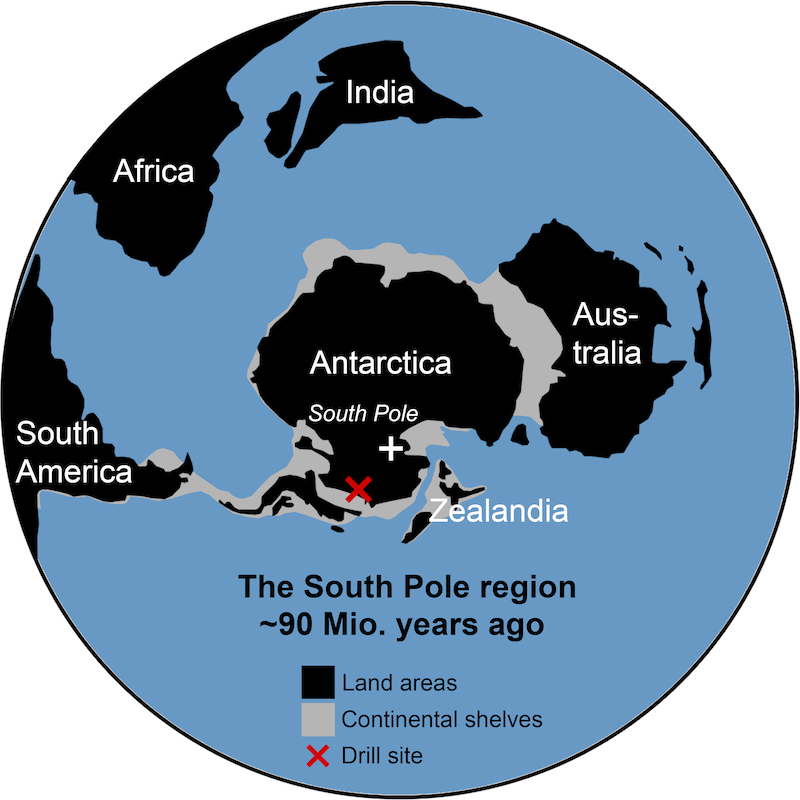 The core sample with fossilized Cretaceous forest soil was collected near Pine Island Glacier in West Antarctica using a portable seafloor drill rig, operated from the research ship RV Polarstern. Johann Klages, a geologist at the Alfred Wegener Institute and the paper’s lead author, commented on the sample in a statement:

During the initial shipboard assessments, the unusual coloration of the sediment layer quickly caught our attention; it clearly differed from the layers above it. Moreover, the first analyses indicated that, at a depth of 27 to 30 meters [89 to 98 feet] below the ocean floor, we had found a layer originally formed on land, not in the ocean. 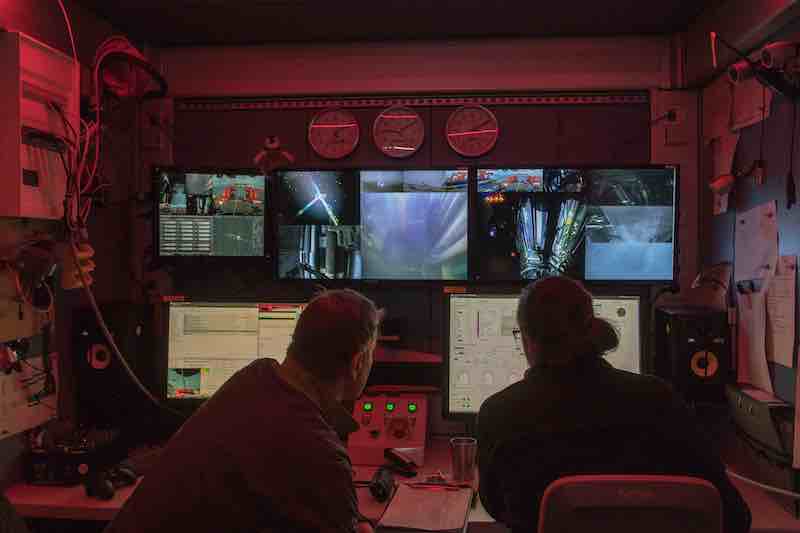 Another surprise followed when the scientists subjected the sample to X-ray CT scans. Visible in the CT images was a dense network of roots, so pristinely preserved that individual cell structures were discernible. In the fine-grained clay and silt of the forest soil layer, the researchers found fossilized pollen and spores from plants, including some from the first flowering plants ever found at such high southern latitudes.

The numerous plant remains indicate that 93 to 83 million years ago the coast of West Antarctica was a swampy landscape in which temperate rainforests grew – similar to the forests that can still be found, say, on New Zealand’s South Island.

How could a temperate rainforest exist at about 82 degrees latitude south, 560 miles (900 kilometers) from the South Pole’s location 90 million years ago, where the forest would have been in darkness each year during four months of polar night?

Over the past 140 million years, the warmest climate on Earth occurred between 115 to 80 million years ago. Scientists have known, from previous studies, that tropical sea surface temperatures could have been as high as 95 degrees Fahrenheit (35 degrees Celsius) and the sea level was 560 feet (170 meters) higher than it is today. This new sediment core was the first opportunity to better understand the southern polar region’s climate during the mid-Cretaceous. There were several steps to the analysis. Klages said:

To get a better idea of what the climate was like in this warmest phase of the Cretaceous, we first assessed the climatic conditions under which the plants’ modern descendants live.

Then, the scientists analyzed the soil sample – looking for biological and geochemical temperature and precipitation indicators – to better understand rainfall amounts, as well as air and water temperatures, in the ancient West Antarctic rainforest. 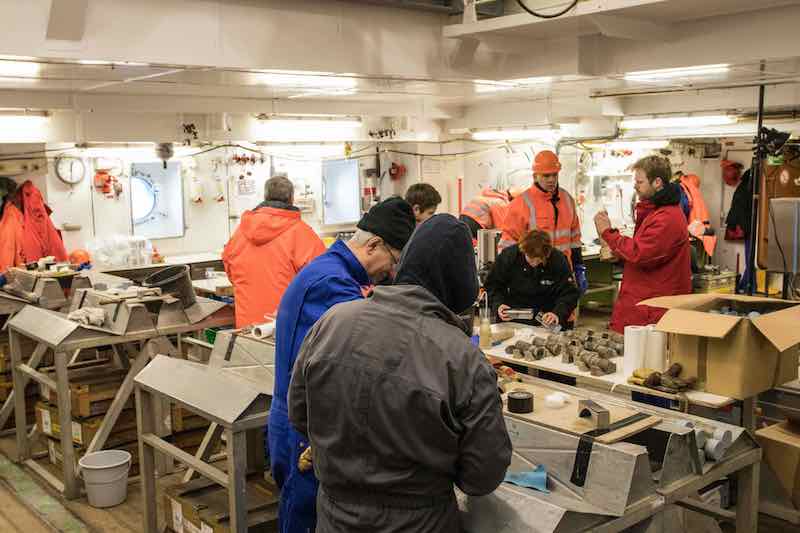 Scientists processing the sediment core sample in a lab aboard the research ship RV Polarstern. Image via Alfred Wegener Institute.

According to climate models run by the scientists, these conditions could have existed if there was dense vegetation across Antarctica with little or no ice sheet present and carbon dioxide levels were higher than previously thought. Gerrit Lohmann, a climate modeler at the Alfred Wegener Institute, commented:

Before our study, the general assumption was that the global carbon dioxide concentration in the Cretaceous was roughly 1000 ppm. But in our model-based experiments, it took concentration levels of 1120 to 1680 ppm to reach the average temperatures back then in the Antarctic. 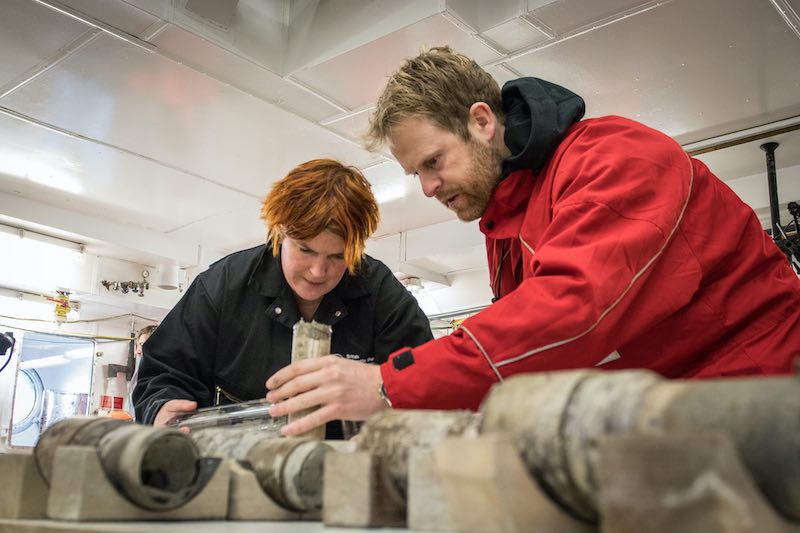 These findings illustrate the powerful effect that carbon dioxide has on the planet and the importance of polar ice sheets in cooling the planet. Torsten Bickert, a geoscientist at the University of Bremen, said:

We now know that there could easily be four straight months without sunlight in the Cretaceous. But because the carbon dioxide concentration was so high, the climate around the South Pole was nevertheless temperate, without ice masses.

But a crucial question remains; how did the Earth subsequently cool down, bringing back the ice sheets? According to Lohmann, their climate simulations haven’t been able to answer that question; understanding how this cooling occurred is going to be an important area of investigation for climatologists. 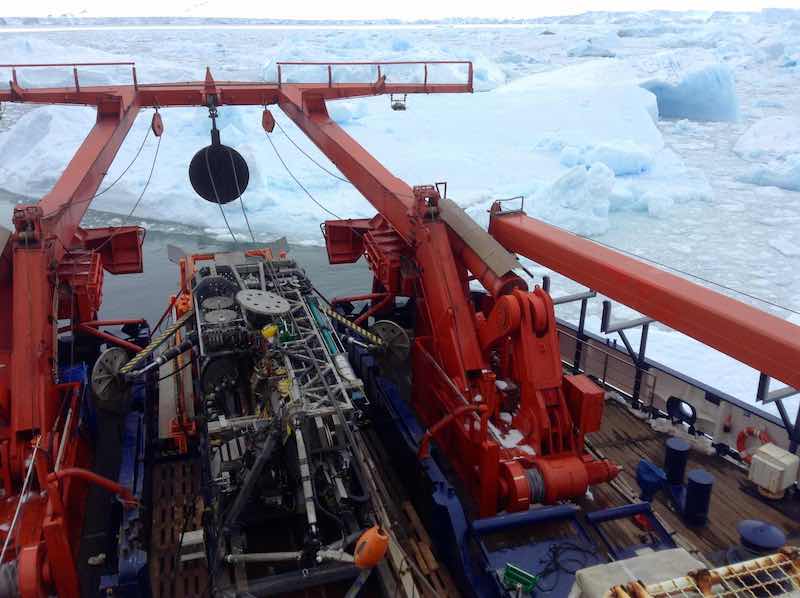 Bottom line: Analysis of fossil remains of a 90 million year old rainforest discovered in a sediment core sample from Antarctica’s Amundsen Sea indicates a surprisingly mild climate. Climate models indicate this was possible because there were barely any ice sheets at the South Pole and significantly high concentrations of carbon dioxide in the atmosphere.