A new type of ichthyosaur

Don’t call it a swimming dinosaur, scientists say. The newly discovered ichthyosaur looks much like a dolphin or shark and swam Earth’s seas for millions of years. 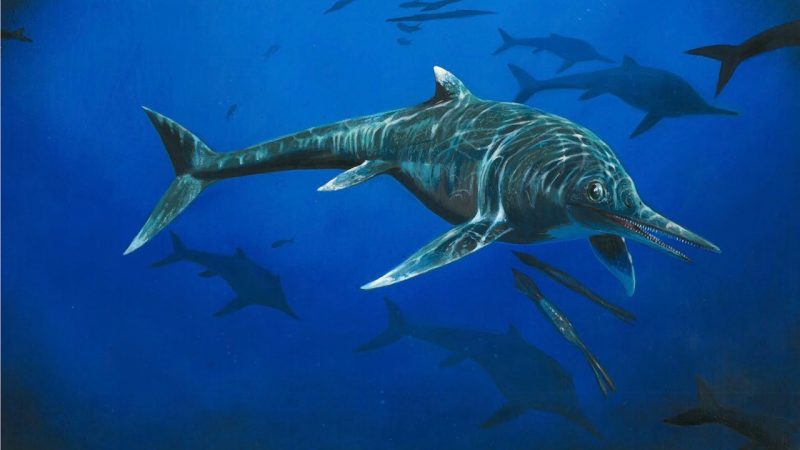 Artist’s concept of a 200 million-year-old species of marine reptile, Wahlisaurus massarae, discovered in fossil remains housed for decades at a museum. Image via University of Manchester.

A new type of ichthyosaur, an extinct marine reptile alive at the same time as the dinosaurs, has been identified by a Manchester, England palaeontologist from a fossil picked up in 1951 in an old quarry in Nottinghamshire. Dean Lomax was examining the fossil at the New Walk Museum in Leicester, England, when he noticed something different about it. The specimen is the first new genus of ichthyosaur from the British Early Jurassic to be described since 1986.

What are ichthyosaurs? They’re often misidentified as swimming dinosaurs (more about that at the bottom of this post). Ichthyosaurs’ shape is similar to that of modern-day dolphins and sharks. They swam the seas of the Earth for millions of years during the Triassic, Jurassic and Cretaceous periods.

The Nottinghamshire fossil is from the earliest part of the Jurassic Period – 200 million years ago – and only a handful of ichthyosaur species are known from this period, making the discovery significant, said the statement. Lomax published this research on June 13, 2016 in the Journal of Systematic Palaeontology.

Lomax is a palaeontologist and Honorary Scientist at The University of Manchester. He also happens to have a fantastic Twitter feed (@Palaeo7 on Twitter), full of interesting things about the creatures that roamed Earth millions of years before humans did. He has some colleagues who tweet, too …

This is Wahlisaurus massarae, it's been identified as a new species of #ichthyosaur by @Palaeo7 How cool is that … pic.twitter.com/Y6ztUTjMR2

As for the new type of ichthyosaur itself, the University of Manchester statement said:

The specimen is relatively complete, consisting of a partial skeleton including a skull, pectoral bones, limbs, pelvis bones, ribs and vertebrae. However, the bones are disorderly – it appears that the carcass ‘nosedived’ into the seabed before it became fossilised, which may have restricted previous study.

Lomax has named the new species Wahlisaurus massarae in honour of two palaeontologists (Professor Judy Massare and Bill Wahl), who first introduced him to studying ichthyosaurs. He commented:

Both Judy and Bill have been tremendous mentors for me. They have significantly contributed to palaeontology, especially the study of ichthyosaurs, and I cannot think of a better way to remember them by naming this new ichthyosaur in their honour.

Their names will be set in stone forever, pun intended!

Bottom line: Dean Lomax was examining a museum fossil, picked up at a quarry in England in 1951, when he noticed some unusual features. His work ultimately led to the description of a new species of ichthyosaur, the first from the British Early Jurassic to be described since 1986.