A look back at Hurricane Isaac

As of now, it appears that Isaac caused the deaths of nearly 40 people and will result in at least $3 billion in damages. 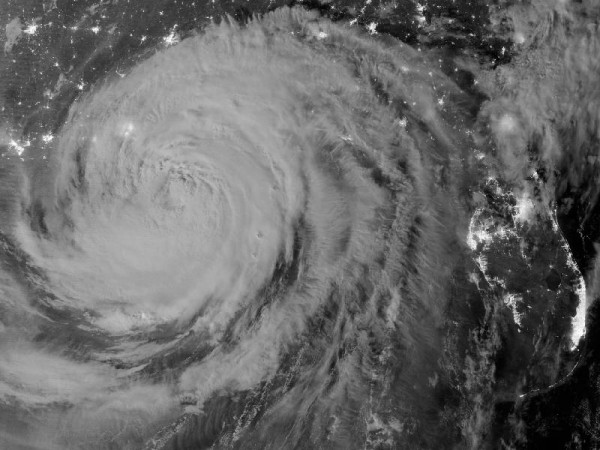 Hurricane Isaac, the 9th named storm and 4th hurricane of the 2012 Atlantic hurricane season, caused plenty of problems across portions of Hispaniola and the United States during the last week of August. Isaac’s slow movement after making landfall in the U.S. resulted in large flooding across Louisiana and through neighboring states. The slow movement brought upon more tropical moisture to push into the southeast providing flash flooding for parts of Mississippi and Alabama. For some areas, the threat for severe weather and tornadoes were a huge concern. At least 13,000 homes were damaged or destroyed in Louisiana alone. As of now, it appears that Isaac caused the deaths of nearly 40 people (at least seven in the U.S., 24 in Haiti, and five in the Dominican Republic), and will result in at least $3 billion in damages. In this post, I’ll focus on the after-effects of Isaac, what it did to some U.S. communities, and talk about how the remnants of this storm could come right back to the northeastern Gulf of Mexico and provide more flooding rains in the same regions hit earlier.

Here is a list of interesting events and ideas that I have noticed since since Isaac struck the Gulf states:

1) All storms are different!

In a post on August 28, when Isaac made landfall in southeastern Louisiana, many noted similarities and differences between Hurricane Isaac and Hurricane Katrina, which also made landfall in southeast Louisiana in 2005, ultimately becoming one of the five deadliest hurricanes in the history of the United States. Some Gulf coast residents interpreted the differences as “Hurricane Isaac will not be as dangerous as Katrina was. We do not need to evacuate.” In some cases, that was a mistake, and comparing a past weather event to an ongoing event isn’t always wise. For instance, the tornado outbreak of April 27, 2011 was a rare event that could be considered “generational.” However, not everyone was affected by those tornadoes directly. It only takes one storm, one tornado, or one flash flood to greatly impact a person’s life. With that said, Isaac could have been someone’s Katrina, Andrew, or April 27th tornado outbreak. Some residents in Louisiana would make that argument. 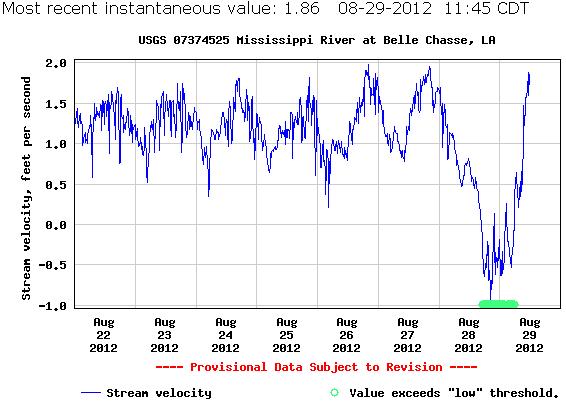 This velocity hydrograph shows the velocity of the Mississippi River during Hurricane Isaac’s landfall. On August 28, the velocity begins to approach negative velocity as high winds and storm surge cause the river to reverse flow. By the end of August 28, the river had regained its regular flow. The USGS streamgage that recorded this information is located at Belle Chasse, LA. Image Credit: USGS

According to the U.S. Geological Survey, the strong winds and storm surge associated with Hurricane Isaac was so strong that it forced the Mississippi River to flow backwards for nearly 24 hours on August 28, 2012. According to the USGS streamgage at Belle Chasse, Louisiana, it showed the Mississippi River flowing upstream at 182,000 cubic feet per second, surging to ten feet above than its previous height. The storm surge traveled as far north as Baton Rouge with the river cresting at eight feet above its prior height. These occurrences have happened before with other land-falling hurricanes in this region. In 2005, Katrina was responsible for reversing the flow of the Mississippi River and it forced Baton Rouge to reach 9 feet above its previous stage.

This reversal of flow of the mighty Mississippi is but one measure of the extreme force of Isaac. While such events are ephemeral, they are yet another reminder of why we need to respect hurricane warnings.

3) Oil washed up on Louisiana beaches after Isaac

Since BP’s Deepwater Horizon spill in 2010, many have continued to wonder where all of the oil went. According to the Associated Press, officials on September 4 restricted fishing in waters extending a mile off a roughly 13-mile stretch of coastline, due to the presence of tar along the coastline. As of now, officials are testing the tar along the Gulf coast to find out if it is related to the BP spill directly.

4) Thousands of dead nutria piled up on the Mississippi beaches

Thousands of dead nutria, also known as swamp rats have piled up along the Mississippi beaches since Isaac pushed ashore. Nutria are giant rodents originally from South America that are eating away at coastal marshlands. According to MSN, approximately 20,000 nutria were washed up along Hancock and Harrison counties in Mississippi. According to Mississippi’s Department of Environmental Quality, nutria are:

… one of the Gulf South’s most notorious invasive species, wreaking ecological havoc on native wetland vegetation and contributing to coastal erosion problems. 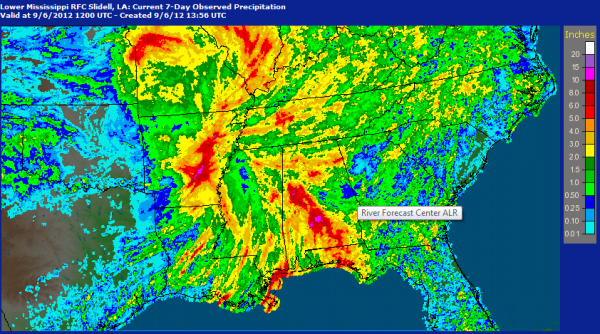 Rainfall totals from Isaac. Many areas received beneficial rain. However, some areas, such as Louisiana, received too much. Image Credit: Advanced Hydrologic Prediction Service

Isaac was a prolific rainmaker because of weak steering that influenced Isaac to stall across Louisiana. Rainfall totals exceeded 10 to 15 inches across central Arkansas, parts of southwestern Alabama, and along the Louisiana and Mississippi coasts. Here are a few notable rainfall totals recorded from Isaac:

The remnants of Isaac eventually pushed slowly to the north and brought stormy weather across Arkansas, Missouri, Kentucky, Tennessee, Illinois, and Indiana. These are the same locations that have experienced exceptional drought. Rainfall totals were estimated around two to six inches across Missouri, Illinois, and Indiana. Many of these areas saw slight improvement which were based upon how well soil moisture levels responded throughout the area that received the most rain and also the favorable response of the river and streamflows, which were running at near record lows. Although these areas saw beneficial rains, it will not help out the summer crops which would be ready to harvest, if there had not been a drought.

Soybeans might have benefited from the recent rains Isaac brought upon the region, but the corn crop has already suffered this summer. Brian Loving, a U.S. Geological Service hydrologist in Lawrence, Kansas said:

Corn needed to have water in May, June and July, and it just wasn’t there. We’ve already missed the growing season, so even if we had 6 inches of rain, anything that needed to grow has already died.

Check out the image below, released from the U.S. Drought Monitor on September 6, 2012. You can see that Isaac lowered the drought levels across Missouri and Arkansas. However, drought worsened further west in Kansas and Nebraska. 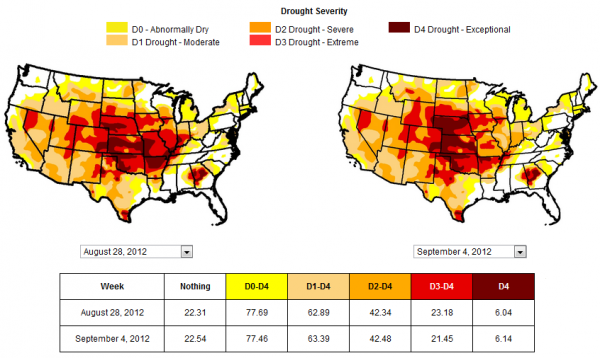 A comparison of the drought across the United States on August 28, 2012 and September 4, 2012. Missouri and Arkansas saw beneficial rains. Image Credit: U.S. Drought Monitor

6) Isaac could spawn another tropical system 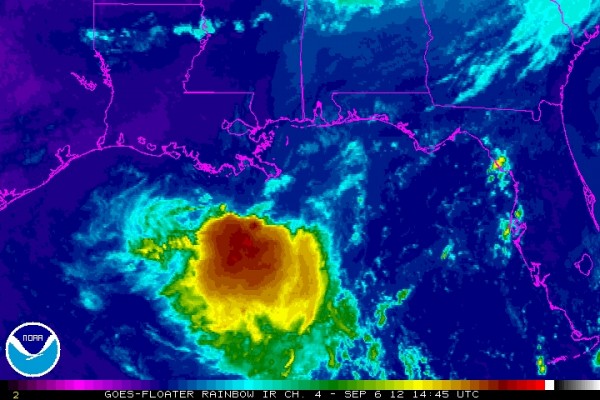 Part of the remnants of Isaac have drifted back into the Gulf of Mexico, and it could redevelop into a new tropical storm. If it does, it will be called “Nadine”. Image Credit: NHC/NOAA

The remnants of Isaac have split into two areas. One area pushed into New England and triggered strong thunderstorms across the region. The other area split and pushed southward into Alabama and eventually pushed into the Gulf of Mexico. As of now, the National Hurricane Center (NHC) is giving this area of thunderstorms that were once associated with Isaac a 40% chance at becoming a tropical cyclone. If this become a tropical storm, it will receive a new name and be called “Nadine.” Why is that?

Here are the rules: if the primary remnant of a tropical cyclone redevelops into a tropical cyclone, it is assigned its original number or name. Both of these areas (New England and now in the Gulf of Mexico) are considered to be the remnants of Isaac. However, neither is considered the primary remnant. Therefore, the NHC will designate this system Nadine if it becomes a tropical storm. As of now, a large trough will push into the eastern coast later this weekend and it will eventually push this system to the northeast. I do not expect this system to become very organized as conditions are not favorable for rapid development. However, models are indicating it could become a depression or a weak tropical storm and provide rains across the eastern Gulf coast and through parts of Florida.

Bottom line:Hurricane Isaac killed at least 40 people and will likely go down as a billion-dollar disaster for 2012. Isaac produced over 20 inches of rain across Louisiana and flooding was a huge concern for many areas. The good news about Isaac was that it provided beneficial rains across areas that were experiencing the worst drought conditions this year. Unfortunately, it is too little too late for these rains from Isaac to help some crops. Part of the remnants of Isaac have drifted back into the Gulf of Mexico, and could develop into a tropical system within the next few days. If it becomes a tropical storm, it will be named Nadine. Isaac was an interesting storm to study and analyze. Forecasters had a tough time nailing down a track for Isaac, and forecasting the intensity of the storm was likewise very difficult. Regardless, the National Hurricane Center did an excellent job forecasting this storm as it pushed northwest into Louisiana.