A hippie’s defense of GMOs

“I’m a crazy hippie. I go to Burning Man every year … I have a pretty solid understanding of how genes work. And ultimately, I’m just not that scared of GMOs.” – SaulofHearts

Editor’s Note: Slate reprinted this article on July 25, 2013. I saw it when Andrew Revkin of the New York Times tweeted it this morning. I think it’s a good, thoughtful article. Your thoughts?

Let me get a few things out of the way.

I’m a crazy hippie. I go to Burning Man every year. I teach yoga. I live in a co-op. For the past two years I’ve been delivering organic vegetables for a local delivery service. I’ve been eating vegetarian for years, and vegan for the past four months.

I’m also fascinated by genetics. I read every book that comes my way on evolutionary theory, population genetics, and mapping the genome. I took several classes on the subject at the University of Pennsylvania. All told, I have a pretty solid understanding of how genes work.

And ultimately, I’m just not that scared of GMOs.

Now don’t get me wrong. I understand where my liberal friends are coming from. I share the same desire for a safe and healthy food supply. There’s a LOT that disturbs me about the state of food production and distribution in America.

I think Monsanto is evil, that patenting seeds and suing farmers is unethical, and that some GMO crops (like Roundup Ready Soybeans) lend themselves to irresponsible pesticide use and cross-contamination.

But I’m also not going to let my anti-corporate sentiments get in the way of a diverse and promising field of research.

When genetic engineering is used to decrease pesticide use, to add nutrients to crops in malnourished countries, and otherwise improve the quality of our food products, then it’s a valuable tool that can contribute to a safe and healthy food supply.

I want to address three points that are often brought up by anti-GMO advocates that are either simply untrue, or a lot more nuanced than we’ve been led to believe.

Genetic manipulation is nothing new. Humans have been breeding plants and animals for thousands of years. Many of our staple crops (wheat, corn, soy), would not exist without human intervention. The same goes for domesticated farm species.

Whether we’re using genetic modification or selective breeding, we’re playing God either way. But some people seem to think that selective breeding is “safer” — that it allows less opportunity for damaging mutations than genetic engineering does. This couldn’t be more wrong.

The entire process of evolution is dependent upon mutation. UV radiation changes the structure of the DNA code in each individual organism. Most of these mutations aren’t beneficial. Some leave out necessary proteins. Others add useless information. And yet, a percentage of these “errors” are helpful enough that they’re passed along to future generations and become the new normal.

If there’s any danger with genetic engineering, it’s that we can be too precise in our manipulation. We can ensure that each new generation of seeds contains the exact same DNA sequence, double-checked for errors and mutations eliminated. The “unnatural” process actually produces less mutations, not more.

2. GMOs contain animal DNA that has been “spliced” into plants.

One of the most enduring myths about genetic engineering concerns a GM tomato which, as legend would have it, contained flounder genes spliced into tomato DNA. While it’s true that Calgene experimented with a freeze-resistant tomato, they used a “synthesized … antifreeze gene based on the winter flounder gene” — not a cut-and-pasted copy of the gene itself.

Those freeze-resistant tomatoes never made it to market, but a different version called the Flavr Savr did. Tomatoes contain a protein called polygalacturonase (PG), which breaks down the pectin in the cell walls, causing the tomato to soften as it ripens. To create a tomato that would ripen more slowly, Calgene took the gene that encodes for the PG protein and reversed it. This backwards strand of DNA, known as an “antisense” gene, binds to the forward-running strand and cancels it out. Without PG, the pectin (and therefore the tomato) breaks down more slowly. The simplicity of the process is remarkable. No toxic chemicals, no mysterious bits of DNA. Just a simple tweak of the tomato’s own genetic code.

But hold on a minute. What if they had used a gene from a fish in creating this tomato? Would the tomato taste fishy? Would you have to watch out for fish bones in your pasta sauce? Not unless you’ve added anchovies.

Genes are basically bits of computer code that are interchangeable from species to species. When you isolate a tiny bit of gene, it doesn’t retain the essence of whichever species it came from. You might have a bit of DNA that says simply, “Grow appendage X on the abdomen,” but doesn’t specify what kind of appendage. If you put that code into a fly, it activates the part of DNA that grows a wing. Put that same code into a mouse and it grows a foreleg. It doesn’t make the mouse any more like a fly.

3. GMO’s are radioactive, cause cancer, and are bad for the environment.

This is a trickier question to answer, and I’ll be the first to admit that we need more research into the health effects of GM products. But I’m going to bet that the answer turns out to be something like this: some GMOs are safe, and others are not. Lumping all GMOs into the same category is like lumping all fertilizers or all pesticides into the same category. Genetic changes are only as dangerous as the proteins they encode for — just as in any plant. Consider how many “natural” plants have genes that produce poisons and toxins.

In the case of the Flavr Savr tomato, I wouldn’t be too worried. It simply blocks a protein that the tomato itself produces. In the case of herbicide-resistant soybeans, I’d want to know more. What kind of herbicide is being sprayed on the plants? Are traces of the herbicide still found in the food when it reaches our plate?

While I voted for the labeling act that was on the California ballot last year, a simple “contains GMOs” label would be of little use to me. I want to know what specifically about the organism was modified so I can reach my own conclusions.

Personally, I think the GMO scare is a distraction from far more important issues going on in the food industry:

— A factory-farming system that’s abusive to the animals we raise and results in unnatural, highly-processed meats

— A glut of “natural and artificial” flavorings, sweeteners, and colors

— Lack of access to quality produce in urban “food deserts”

If we really want to do something about public health issues, then these are the problems we should be focusing on. I’m not going to object to something that could have a positive effect on the world’s food supply because there’s a chance that something I eat might give me cancer ten or twenty years down the line.

That risk already exists. I’m just as likely to get cancer from the un-modified, but highly-processed foods that are already in the market.

In the meantime, I’m going to support those GM efforts that might actually do some good for the world. There’s the Golden Rice Project, which fortifies rice in developing countries so as to combat micronutrient deficiencies. There have been attempts to genetically modify trees both to fight pollution and to decrease fossil fuel dependency.

And then there’s the banana vaccine for Hepatitis B, which, due to regulatory restrictions, may be reworked into a non-edible vaccine in the tobacco plant.

I don’t know about you guys, but these sound like pretty liberal objectives to me. 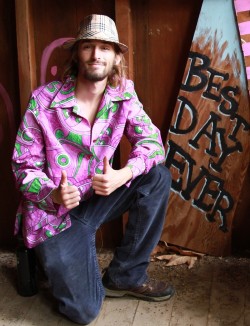 GM crops, combined with sustainable and organic agriculture, might do more to advance our cause than any other scientific advancement of the modern era.

By all means, let’s March Against Monsanto. But then let’s put genetic engineering into the hands of forward-thinking, progressive scientists so we can start a real agricultural revolution.

Saul Of-Hearts is a writer, musician, videographer, and yoga instructor based in Los Angeles. He’s lived among various subcultures, and blogs about Burning Man and other places where art and science meet. Most recently he’s launched a project called The Lateral Freelancer: How to Make a Living in the Share Economy, and an accompanying e-book.