The quake happened around 10:15 p.m. Tuesday night, according to clocks in Alaska. A tsunami warning along coastal Alaska – which was later rescinded – sent some residents to higher ground. 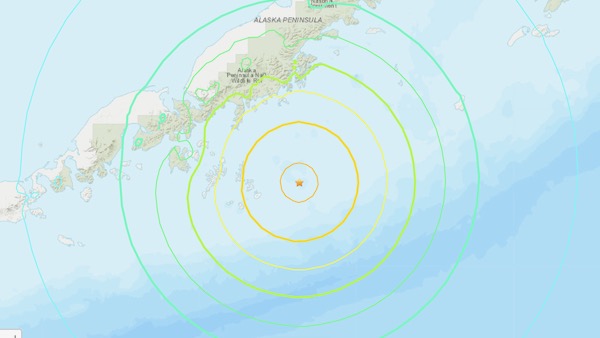 According to Alaska Public Media, residents across coastal Alaska – from Homer to Unalaska – woke to the sounds of sirens and phone alerts last night, warning them of a possible tsunami. Many quickly left home, moving to higher ground. The warnings followed a 7.8-magnitude earthquake – a very powerful earthquake – that struck off coastal Alaska at around 10:15 p.m., local time, on Tuesday, July 21, 2020. The earthquake was centered offshore, 60 miles (98 km) south-southeast of Perryville, Alaska, according to the U.S. Geological Survey (USGS). All tsunami warnings and advisories were canceled early Wednesday morning, according to the National Weather Service.

Hundreds wore masks against the spread of the coronavirus as they gathered in shelters.

No reports of any damage. No injuries were reported. Everything is nominal.

There have been multiple, smaller aftershocks since the main quake.

The #tsunami warning for the 7.8 magnitude #Alaska #earthquake has been cancelled. https://t.co/LPlKBcQd0D

Bottom line: A July 21, 2020, earthquake off coastal Alaska measured 7.8 magnitude. It prompted a tsunami warning, which was later rescinded.