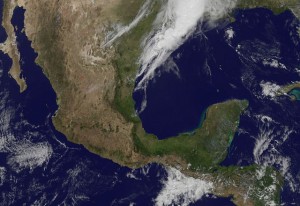 This visible image from NOAA’s GOES-13 satellite was captured at 1815 UTC (2:15 p.m. EST), just 13 minutes after the 7.6 magnitude earthquake centered in southwestern Mexico’s Oaxaca state. The image, created at NASA, shows a virtually cloud-free sky over that region.

Thank you! Your submission has been received!
Oops! Something went wrong while submitting the form.
END_OF_DOCUMENT_TOKEN_TO_BE_REPLACED