A local tsunami warning was issued and has now been withdrawn. No Pacific-wide tsunami warning. Hawaii might get strong and unusual ocean currents, but no destructive sea-level rise.

The U.S. Geological Survey (USGS) said that a strong 7.5-magnitude earthquake struck off the southeastern coast of Alaska just before midnight local time last night (January 4-5, 2013). A local tsunami warning was issued for parts of southern Alaska and coastal Canada, and it has now been withdrawn. The warning area extened for about 475 miles and included coastal areas from about 75 miles southeast of Cordova, Alaska, to the north tip of Vancouver Island, Canada, the Alaska Tsunami Warning Center said. There were no initial reports of damage from the earthquake.

Here are the details of the quake from USGS: 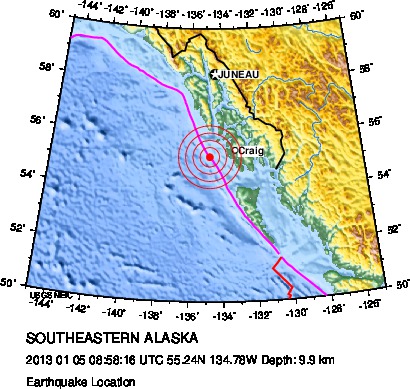 The original statement from the Alaska Tsunami Warning Center said a “significant widespread inundation of land” was expected, but that has apparently not happened.

THE WEST COAST AND ALASKA TSUNAMI WARNING CENTER HAS ISSUED A REGIONAL TSUNAMI WARNING AND/OR WATCH AND/OR ADVISORY FOR OTHER PARTS OF THE PACIFIC LOCATED CLOSER TO THE EARTHQUAKE. BASED ON ALL AVAILABLE DATA THERE IS NO DESTRUCTIVE TSUNAMI THREAT TO HAWAII.

HOWEVER… SOME COASTAL AREAS IN HAWAII COULD EXPERIENCE SMALL NON-DESTRUCTIVE SEA LEVEL CHANGES AND STRONG OR UNUSUAL CURRENTS LASTING UP TO SEVERAL HOURS. THE ESTIMATED TIME SUCH EFFECTS MIGHT BEGIN IS 0428 AM HST SAT 05 JAN 2013

Bottom line: A strong 7.5-magnitude earthquake struck off the southeast coast of Alaska on the night of January 4-5, 2013. The Alaska Tsunami Warning Center issued a local warning and expected some flooding, but it has now withdrawn that warning. No Pacific-wide tsunami is expected, although Hawaii might experience small non-destructive sea level changes and strong or unusual currents lasting up to several hours.