USGS said the quake was centered northwest of the Pacific resort of Acapulco, where many Mexicans are vacationing for the Easter holiday.

The U.S. Geological Survey (USGS) is reporting a 7.2-magnitude earthquake – a very strong earthquake – that took place in central and southern Mexico this morning. It was originally reported as a 7.5-magnitude and then revised downward. The deep earthquake, whose epicenter was 30 miles below Earth’s surface, occurred near Tecpan, Guerrero, Mexico at 14:27:29.40 UTC on Apr 18, 2014. USGS said the quake was centered northwest of the Pacific resort of Acapulco, where many Mexicans are vacationing for the Easter holiday. The quake was also felt in of Mexico City, a city of 8.8 million which is vulnerable to earthquakes. There were no immediate reports of injuries or damage. Alicia Dominguez at a civil protection office in Mexico told ABCNews:

There is a crisis of panic. It’s mainly the tourists who are shaken.

Details of the quake, from USGS, are as follows:

Time.com reported that the quake shook Mexico City for at least 30 seconds, with buildings swaying as people fled from high rise buildings to the streets. Because of the Easter holiday, that city was less crowded than usual. Mexico City is vulnerable even to distant earthquakes because much of it sits atop the muddy sediments of drained lake beds that quiver as quake waves hit. In 1985, a magnitude-8.1 quake killed at least 6,000 people in Mexico City and destroyed many buildings, despite being centered 250 miles (400 kilometers) away on the Pacific Coast. 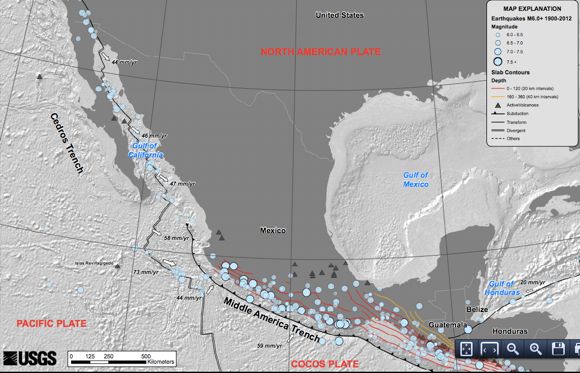 [Mexico is] located atop three of the large tectonic plates [and] is one of the world’s most seismically active regions. The relative motion of these crustal plates causes frequent earthquakes and occasional volcanic eruptions. Most of the Mexican landmass is on the westward moving North American plate. The Pacific Ocean floor south of Mexico is being carried northeastward by the underlying Cocos plate. Because oceanic crust is relatively dense, when the Pacific Ocean floor encounters the lighter continental crust of the Mexican landmass, the ocean floor is subducted beneath the North American plate creating the deep Middle American trench along Mexico’s southern coast. Also as a result of this convergence, the westward moving Mexico landmass is slowed and crumpled creating the mountain ranges of southern Mexico and earthquakes near Mexico’s southern coast. As the oceanic crust is pulled downward, it melts; the molten material is then forced upward through weaknesses in the overlying continental crust. This process has created a region of volcanoes across south-central Mexico known as the Cordillera Neovolcánica.

Bottom line: A powerful 7.5-magnitude earthquake took place this morning in southern and central Mexico. It was centered on Acapulco, where many Mexicans are vacationing for the Easter holiday. Mexico City also felt the quake. There are no immediate reports of injuries or damages. We will update as we receive more information.