Hundreds reported dead, with the death toll set to rise. The most severely affected areas are remote. As of late Monday, communications were cut off. 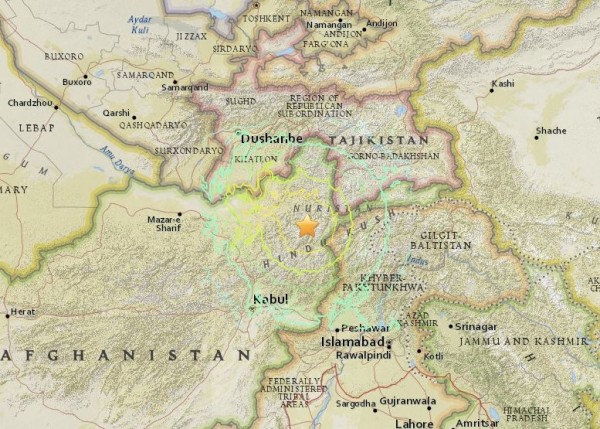 The U.S. Geological Survey has reported a 7.5-magnitude earthquake – an extremely powerful earthquake – which struck in in Afghanistan on Monday afternoon, October 26, 2015. The quake took place 158 miles (254 km) north-northeast of Kabul, Afghanistan at 1:30 p.m. in Kabul (9:10 UTC, 5:10 a.m. CDT at North American timezones). CNN reported that its teams in Afghanistan, India and Pakistan all felt strong tremors, and CNN’s producer in Kabul, Masoud Popalzai said:

It was really bad. In 30 years of my life, it was the worst I experienced myself.

The BBC reported late in the day on Monday that more than 260 people, mostly in Pakistan, died in the earthquake and that at least 12 of the victims were Afghan schoolgirls killed in a crush as they tried to get out of their building. The BBC said:

The death toll is set to rise as the most severely affected areas are very remote and communications have been cut off.

Early in the day on Monday, USGS issued an orange alert on the quake:

Significant casualties are likely and the disaster is potentially widespread. Past events with this alert level have required a regional or national level response.

There are reports of heavy casualties caused by the quake but, exact numbers are yet to be release by relevant government entities.2

Today’s earthquake was the strongest one felt in the recent decades.

There are reports of heavy casualties caused by the quake but, exact numbers are yet to be release by relevant government entities.

At least 11 school students were killed while trying to exit the building in Takhar Province. Many others are injured in the same province.

To avoid further damages and casualties, we have asked people to stay outdoors as there is still fear of aftershocks.

We have received reports of damages and casualties from eastern and northern provinces of the country.

Some mobile networks are down and we are still figuring out to main our contacts with the provinces we couldn’t contact so far.

Government is working to provide first aids for those affected by the quake. Our international partners are helping with that cause.

I have asked for an urgent assessment and we stand ready for assistance where required, including Afghanistan & Pakistan.

I have asked for an urgent assessment and we stand ready for assistance where required, including Afghanistan & Pakistan.

The October 26, 2015 M 7.5 earthquake near the Hindu Kush region of Afghanistan (SW of Jarm) occurred as the result of reverse faulting at intermediate depths, approximately 210 km below the Hindu Kush Range in northeastern Afghanistan. Focal mechanisms indicate rupture occurred on either a near-vertical reverse fault or a shallowly dipping thrust fault. At the latitude of the earthquake, the India subcontinent moves northward and collides with Eurasia at a velocity of about 37 mm/yr.

Active faults and their resultant earthquakes in northern Pakistan and adjacent parts of India and Afghanistan are the direct result of the convergence between the India and Eurasia plates. This collision is causes uplift that produces the highest mountain peaks in the world including the Himalayan, the Karakoram, the Pamir and the Hindu Kush ranges …

Seven other M 7 or greater earthquakes have occurred within 250 km of this event over the preceding century, the most recent being a M 7.4 earthquake in March 2002 just 20 km to the west of the October 26, 2015 event, and with a similar depth and thrust fault orientation. The 2002 event caused over 150 fatalities and the damage or destruction of over 400 houses in relation to an associated landslide.

Read more from USGS about the October 26, 2015 earthquake in Afghanistan.

TheGuardian.com has live updates on the situation in Afghanistan and Pakistan.