October 15, 2013, 1150 UTC (6:50 a.m. CDT). The death toll continues to climb in the powerful and deep earthquake that took place early today (Tuesday, October 15, 2013) in the Philippines, with some reports now as high as 93. The earthquake’s epicenter was near Tagbilaran, Bohol in the southern Philippine islands. The Pacific Tsunami Warming Center did not issue a tsunami warning for this event. The quake was initially reported as 7.2 magnitude and later downgraded to 7.1. This is a very powerful earthquake.

The initial quake was followed by several aftershocks of around 5.4-magnitude, and more aftershocks are possible.

The death toll from a 7.2-magnitude earthquake that struck the central Philippine island of Bohol on Tuesday rose to 93, as rescuers struggled to reach patients in a collapsed hospital. Centuries-old stone churches crumbled and wide areas were without power.

Panic ensued as people spilled out on the street after the quake struck at 8:12 a.m. It was centered about 20 miles below Carmen town on Bohol Island, where many buildings collapsed, roads cracked up and bridges fell. Extensive damage also hit densely populated Cebu city, across the narrow strait from Bohol, causing deaths when a fish port and a market roof fell.

The quake set off a stampede in a Cebu gym where people lined up to receive government cash assistance, killing five and injuring eight others, said Neil Sanchez, provincial disaster management officer. In another city nearby, 18 people were injured in the scramble to get out of a shaking building where the assistance was being handed out.

At least 16 people died in Bohol and 15 in Cebu, officials said. Scores were injured. 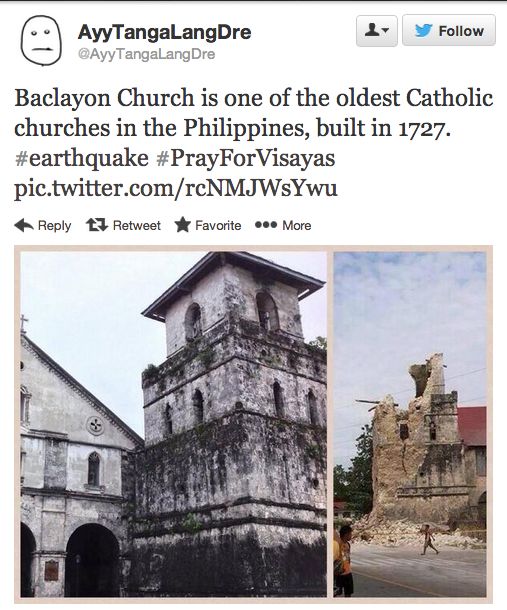 The Philippines, an island nation in the western Pacific, is located along the Ring of Fire and thus is subject to relatively frequently earthquakes.

The U.S. Geological Survey (USGS) initially reported the quake as 7.2 magnitude, then lowered it to 7.1. A 7.1-magnitude earthquake is a very strong earthquake. Details of the quake are as follows: 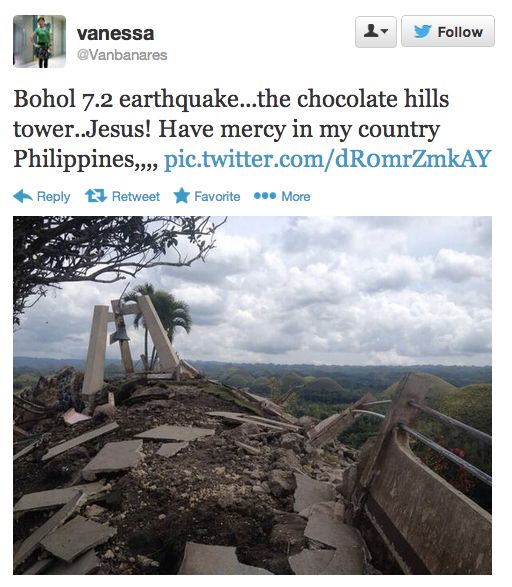 Bottom line: At least 32 are dead and scores are injured in the powerful earthquake that rocked the southern Philippine islands on Tuesday, October 15, 2013. The USGS is now reporting the earthquake as a 7.1-magnitude. No tsunami warning was issued. Buildings toppled, and there was panic among the people.

Thank you! Your submission has been received!
Oops! Something went wrong while submitting the form.
END_OF_DOCUMENT_TOKEN_TO_BE_REPLACED