A 7.1-magnitude earthquake struck the coast of Chile on March 25, 2012 at 22:37 UTC. No widespread tsunami warning. Few reports of injuries at this time.

A 7.1-magnitude earthquake struck portions of south-central Chile on Sunday, March 25, 2012 at 22:37 UTC (5:37 p.m. CDT), according to the USGS. The quake occurred around Maule, Chile, and the epicenter is estimated to be 219 kilometers (136 miles) south-southwest of Santiago, Chile. The quake struck at a depth of 34.8 km (21.6 miles). Based on historical records, no tsunami warnings have been issued, and none are expected at this time. As of now, there are a few reports of injuries that resulted from this quake. 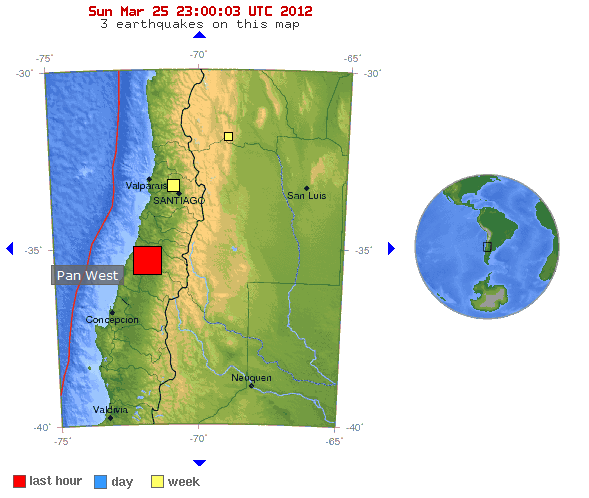 7.1 earthquake has struck along the coast of south-central Chile. Image Credit: USGS

According to the Associated Press (AP), the quake struck 20 miles (32 kilometers) north-northwest of Talca, one of the hardest-hit cities in the huge quake that devastated central Chile two years ago. Although no widespread tsunami warnings were issued, local tsunamis are still a possibility, and Chile’s government has ordered residents along the coast to evacuate and move to higher ground.

Map of South America and the area affected by the preliminary 7.2 earthquake. Image Credit: USGS

According to the Pacific Tsunami Warning Center:

NO DESTRUCTIVE WIDESPREAD TSUNAMI THREAT EXISTS BASED ON HISTORICAL EARTHQUAKE AND TSUNAMI DATA.

HOWEVER – EARTHQUAKES OF THIS SIZE SOMETIMES GENERATE LOCAL TSUNAMIS THAT CAN BE DESTRUCTIVE ALONG COASTS LOCATED WITHIN A HUNDRED KILOMETERS OF THE EARTHQUAKE EPICENTER. AUTHORITIES IN THE REGION OF THE EPICENTER SHOULD BE AWARE OF THIS POSSIBILITY AND TAKE APPROPRIATE ACTION.

When the quake struck, many people were reported evacuating buildings, and there are reports of partial power outages across the region.

Details of the quake by the USGS:

Earthquakes with this intensity likely causes at least some damage, especially in buildings that are poorly constructed. We will keep you posted if we receive more information on damage, injuries, or fatalities in this region.

Bottom line: A 7.1-magnitude earthquake struck portions of south-central Chile on Sunday, March 25, 2012 at 22:37 UTC (5:37 p.m. CDT). No tsunami warnings have been issued, but some coastal residents have been asked to move to higher ground, as local tsunamis remain a possibility. As of now, there are a few reports of injuries that resulted from this quake.