The quake hit at 8:10 p.m. local time. There were no immediate reports of damage or injuries. No tsunami warning was issued.

The U.S. Geological Survey reported a strong, 6.6-magnitude earthquake Wednesday night (April 23, 2014) in the Pacific Ocean off the northwest corner of British Columbia’s Vancouver Island. The quake hit at 8:10 p.m. local time. There were no immediate reports of damage or injuries. No tsunami warning was issued.

The quake was followed by aftershocks of magnitude 5.0 and 4.2, the USGS said.

This part of Canada is located along what geologists call the Ring of Fire, one of the most geologically active areas on Earth and a site for frequent earthquakes and powerful volcanic eruptions. 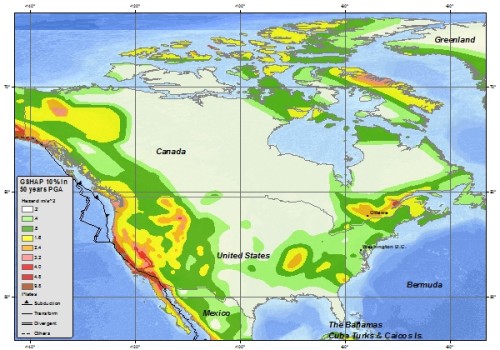 Seismic hazard map, via USGS. Read more about the Ring of Fire.

Bottom line: An earthquake of magnitude 6.6 struck in the Pacific off Vancouver Island on the night of April 24, 2014.