Felt in Rome, it’s the strongest earthquake to hit Italy in 36 years and the largest in an on-going sequence of damaging earthquakes in Italy in 2016. 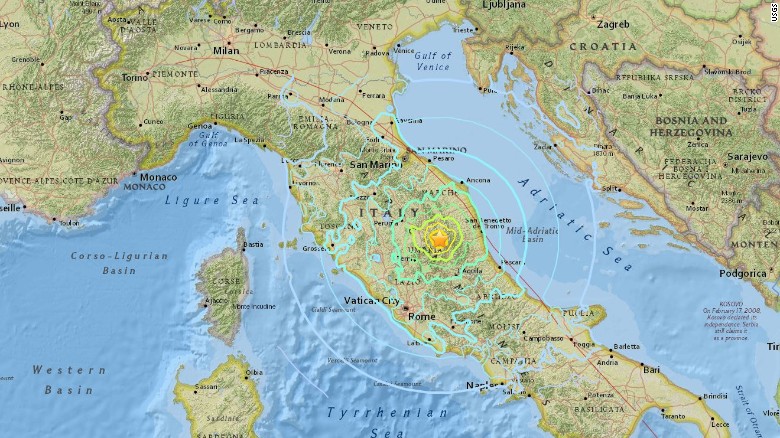 The U.S. Geological Survey is reporting a 6.6 magnitude earthquake in central Italy this morning (October 30, 2016). There are no deaths or serious injuries reported so far, but several people had to be pulled from rubble. And several buildings have been destroyed, including the Basilica of St. Benedict at the Monastery of St. Benedict in Norcia, Italy. At this writing, there are 11 casualties reported, with aftershocks occurring about every 20 minutes, according to CNN.

See satellite images of the aftermath of the August 24 earthquake

Casualties from the October 30 quake were much lighter, possibly because the Italian government had earlier evacuated people to shelters, following a series or foreshocks (tremors) several days ago. CNN said:

Many residents in the region had already evacuated to emergency camps and hotel rooms paid for by the government after the tremors just days ago, and schools had shut down in anticipation of powerful aftershocks.

The monks of Norcia issued a statement saying:

The monks are all safe, but our hearts go immediately to those affected, and the priests of the monastery are searching for any who may need the Last Rites.

The October 30, 2016 M 6.6 earthquake north of Norcia, Italy, occurred as the result of shallow normal faulting on a NW-SE oriented fault in the Central Apennines.

It hurts to see this picture. Church of #SanBenedetto in #Norcia collapsed after the #earthquake of this morning. #umbria #octber30th2016 pic.twitter.com/AmszLnqtQP

Meanwhile, in Rome – about 100 miles away (170 km) – people also felt the October 30 earthquake. Steph Kirchgaessner (@skirchy on Twitter) is The Guardian’s Rome correspondent. Here are some of her tweets from this morning.

Every now and then TV reports interuppted as journalists say it's shaking again "ecco, ecco, ecco" is all you hear

Though relatively far from the worst,feels a bit jittery in Rome. People checking in on neighbors.Only time I felt such a quake was in Chile

No casualties reported yet, according to head of civil protection. About ten injuries, one of them serious #Italyearthquake

Italians and the world face the sad reality that a beautiful part of Italy, in Marche and Umbria, will never be the same. #ItalyEarthquake

Get live news on the Italy earthquake from the Guardian

Here is CNN’s page on the Italy earthquake

Here is the BBC’s report on the Italy earthquake