Two are reported dead in the 6.5-magnitude earthquake, which struck just off the western Greek island of Lefkada on the morning of November 17. 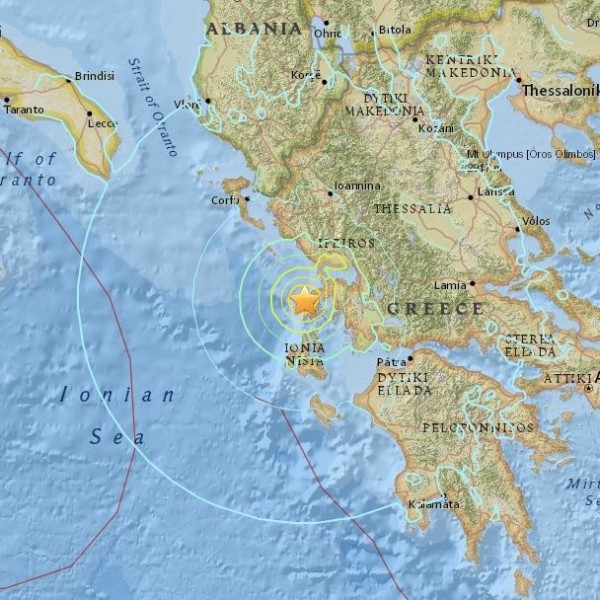 The U.S. Geological Survey is reporting a 6.5-magnitude earthquake that struck in Greece this morning (November 17, 2015). The quake occurred 66 miles (106 km) southwest of Ioannina early Tuesday, just off the western Greek island of Lefkada. Two people are reported dead so far.

The initial reading of 6.7 was adjusted to 6.8 and the depth changed to 5 kilometers, according to the scientists. Later readings from the USGS put the magnitude at 6.5, while the University of Athens gave 5.9 reading.

Between 1939 and 1999 a series of devastating M7+ strike-slip earthquakes propagated westward along the North Anatolian Fault Zone, beginning with the 1939 M7.8 Erzincan earthquake on the eastern end of the North Anatolian Fault system. The 1999 M7.6 Izmit earthquake, located on the westward end of the fault, struck one of Turkey’s most densely populated and industrialized urban areas killing, more than 17,000 people.

The Mediterranean region is seismically active due to the northward convergence (4-10 mm/yr) of the African plate with respect to the Eurasian plate along a complex plate boundary … The highest rates of seismicity in the Mediterranean region are found along the Hellenic subduction zone of southern Greece, along the North Anatolian Fault Zone of western Turkey and the Calabrian subduction zone of southern Italy.