This Alaska quake is one of several moderately large earthquakes that happened yesterday and today along the eastern edge of the Ring of Fire.

Earthquake in southeast Alaska on January 31, 2013

The U.S. Geological Survey is reporting a 6.0 magnitude earthquake in southeast Alaska. It took place at close to 1 a.m. local time (00:53) on January 31, 2013. The West Coast and Alaska Tsunami Warning Center did not issue a tsunami warning. There are no reports of injuries or damages. This Alaska quake is one of several large earthquakes that happened yesterday and today along the eastern edge of what is commonly called the Ring of Fire.

Here are the details of the quake, from USGS: 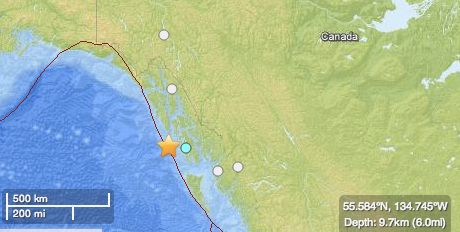 The January 31, 2013 earthquake in Alaska did not prompt of tsunami warning, and there were no reports of injuries or damages. White dots indicate the location of nearby towns, as described in the text above. Map via USGS

Several moderately large earthquakes have happened in the past two days along the eastern edge of the Ring of Fire (the area of tectonic activities – volcanoes and earthquakes – bordering the Pacific Ocean). One was a 5.3-magnitude quake off the coast of Oregon. Another was a 6.7-magnitude quake in Chile. No injuries, damages or tsunami warnings resulted from any of these earthquakes.

Small to moderate earthquakes are happening constantly on Earth. Click here to see USGS’ earthquake map of earthquakes magnitude 2.5 or greater for the past 7 days.

Read about tsunamis generated from Alaska, from USGS

Bottom line: The USGS is reporting a 6.0-magnitude earthquake in southeast Alaska. No tsunami warning. No reports of injuries or damages.