The swarm began on July 12 and has increased in intensity over the past several days.

UPDATE NOVEMBER 7, 2014. Nevada Seismological Laboratory at University of Nevada, Reno joins with other federal, Washington and Oregon agencies to provide this update:

A swarm of earthquakes in a sparsely populated area of far northwest Nevada that began on July 12, 2014, has increased in intensity over the past several days. This activity is located about 40 miles southeast of Lakeview, Ore., and 40 miles northeast of Cedarville, Calif. During the past three months the Nevada Seismological Laboratory, in collaboration with the U.S. Geological Survey and seismic networks in Washington and Oregon, has recorded 42 earthquakes larger than magnitude 3, and about 550 earthquakes larger than magnitude 2. Three magnitude 4+ events have occurred since Oct. 30, with the largest event of the sequence, magnitude 4.6, at 11:23 p.m., Nov. 4, 2014 (PST). [Breaking: another 4.7-magnitude quake occurred on November 7 at 12:07 a.m. local time]

This activity resembles the 1968 Adel, Ore., swarm, which also lasted several months and included three events of approximately magnitude 5. The Adel swarm caused moderate damage. Another analog is the 2008 Mogul-Somersett swarm in west Reno. This swarm also consisted of an increasingly vigorous series of earthquakes over a two-month period, leading to a magnitude 5 event. The Mogul sequence also caused moderate local damage.

Following any sequence of earthquakes similar to what is occurring in northwest Nevada, there is a small increase in the probability of a larger event. Whether a larger event will occur in the northwest Nevada swarm cannot be predicted or forecast. However, large earthquakes can happen anywhere in Nevada, and we encourage citizens to take steps to prepare for the potential for strong ground shaking.

Real-time earthquake information on this sequence is available at https://www.seismo.unr.edu, and https://earthquake.usgs.gov/earthquakes/map. 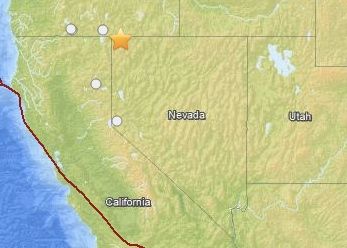 ORIGINAL ARTICLE (NOVEMBER 4, 2014). The U.S. Geological Survey (USGS) reports a 4.6-magnitude earthquake in northwestern Nevada Tuesday night. They first reported it as a 4.9-magnitude and later downgraded it. This earthquake is the largest one recently in an earthquake swarm that has been occurring in the sparsely populated northwest corner of Nevada, near the borders of Oregon and California, since July 2014. The quake hit at 11:23 p.m. on Tuesday, according to USGS, 191 miles (307 km) north of Carson City, Nevada.

Meanwhile, AP said only four people reported feeling the quake, with the nearest person in Cedarville, California, about 45 miles west.

… seems to be caused by normal movement of the tectonic plates that make up the surface of the Earth and there’s no evidence to suggest a major quake is coming.

Click here for a seismicity hazard map of Nevada, from USGS

Nevada ranks among the most seismically active States.

A number of the larger shocks have produced some spectacular examples of surface faulting; these include shocks at Pleasant Valley (1915), Cedar Mountain (1932), Excelsior Mountain (1934), Rainbow Mountain (1954), and Fairview Peak – Dixie Valley (1954). Although these events are classied as major earthquakes in terms of magnitude, no fatalities were reported and building damage was minimal because of the sparse population of the epicentral areas.

The earliest reported earthquake in Nevada occurred in 1851. A newspaper article in 1865 cited reports of an earthquake 13 years earlier near Pyramid Lake. The account stated that great cracks opened from which water spouted 100 feet high. Large landslides were also reported. 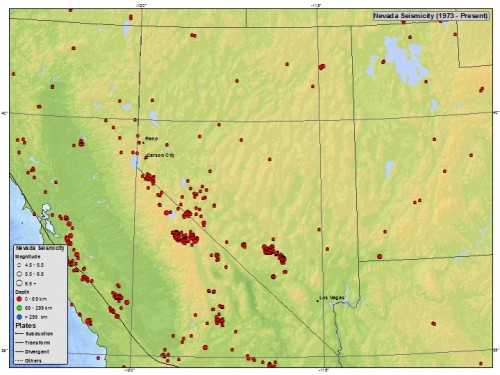 Seismicity map of Nevada, from USGS.