A rainforest canopy can reach 15 to 20 stories high. It’s an ecosystem unto itself. Now – to study drought effects – scientists have made the 1st 3D measurements of rainforest canopies in the Brazilian Amazon.

NASA released this new video on June 12, 2018. It depicts scientists flying over a rainforest canopy in the Brazilian Amazon, using an instrument to fire 300,000 laser pulses per second. Using this technique, NASA scientists have obtained a 3D look at the rainforest canopy and the first-ever measurements of the high number of tree branch falls – and of tree mortality – occurring in the Brazilian Amazon under drought conditions. They found that 65 percent more trees and large branches died due to an El Niño-driven drought in 2015-2016 as compared to an average year.

The new work is published in the peer-reviewed journal New Phytologist. You’ll find the paper online here. The scientists said that understanding the effects of prolonged drought will give them a better sense of what might happen to carbon stored in tropical forests if, as scientists expect, drought events become more common as the climate continues to warm.

Earth system scientist Doug Morton at NASA’s Goddard Space Flight Center in Greenbelt, Maryland, is a co-author on the research. He commented in a statement:

Climate projections for the Amazon basin suggest warmer and drier conditions in coming decades. Drought events give us a preview of how tropical forests may react to a warmer world.

When it doesn’t rain in the rainforest, trees are more at risk of dying because they can’t get enough water from the soil to their canopies, which can reach 15 to 20 stories high. In a rainforest as vast as the Amazon, estimating the number of dying or damaged trees, where only branches may fall, is extremely difficult and has been a long-standing challenge.

Traditionally, researchers hike in and survey a few acres of trees to measure living trees and dead debris on the ground. Morton and his colleagues took the bird’s eye perspective using light detection and ranging (LiDAR) technology mounted onto an airplane to create a 3D reconstruction of the same forest canopy over three separate flights in 2013, 2014 and 2016. With 300,000 laser pulses a second, the LiDAR data provides an incredibly detailed depiction of the forest over a much greater area than they could cover on foot.

In Brazil, the researchers flew two 30-mile (50-km) swaths near the city of Santarém in the state of Pará, one over the Tapajós National Forest and the other over privately-owned forests that have been fragmented by a range of land uses. This region of the Amazon typically has a three-month dry season from October through December, the same period when Pacific Ocean sea surface temperatures peak during an El Niño event. El Niño conditions are associated with a delay the start of the rainy season in the central Amazon, leading to an extended dry season that stresses the trees.

Analyzing the three surveys, the team used the LiDAR data to detect new gaps in the canopy where a tree or branch had fallen in the months between observations. During the non-El Niño period from 2013 to 2014, the branch and tree fall events altered 1.8 percent of the forest canopy in the study area, a small number on the surface but scaled up to the size of the entire Amazon, it’s the equivalent of losing canopy trees or branches over 38,000 square miles [98,000 square km], or the area of Kentucky. Tree and branch mortality was 65 percent higher during the El Niño drought period from 2014 to 2016, or 65,000 square miles [168,000 square km], the size of Wisconsin. Small changes in the Amazon add up.

Morton also said that – because it’s a big forest – even a subtle shift in an El Niño year has a big impact on the total carbon budget of the forest. In other words, drought affects the balance between how much carbon dioxide trees remove from the atmosphere to build their trunk, branches, and leaves as they grow versus the amount that returns to the atmosphere when trees die and decompose. These scientists found that drought did not selectively kill a greater proportion of tall trees versus smaller trees, as was previously thought from experiments that simulated drought conditions in small plots. And that’s good news for the carbon budget, Morton said, explaining:

Large trees hold most of the carbon in any forest. If droughts were to preferentially kill large trees, it would boost the total amount of carbon that’s lost from drought as opposed to other disturbance types.

Read more about the Brazilian Amazon study via NASA 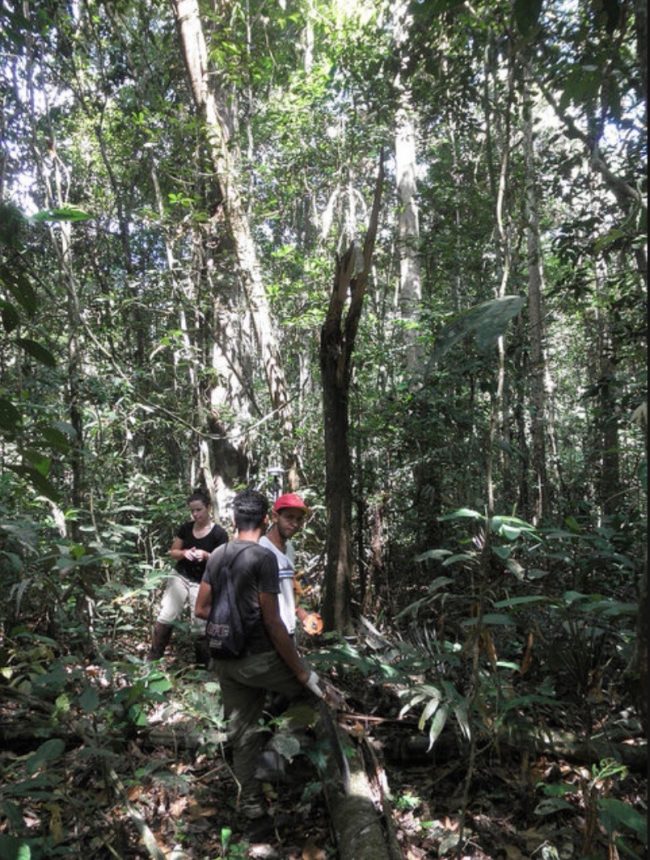 In the past, researchers studying the Brazilian Amazon have hiked in and surveyed a few acres of trees to measure living trees and dead debris on the ground. The new study took a bird’s eye perspective, using LiDAR technology mounted onto an airplane to create a 3D reconstruction of the forest canopy. Image via NASA.

Bottom line: Scientists have made the first 3D measurements of rainforest canopies in the Brazilian Amazon, in order to study the effects of prolonged drought in the region.