This year’s ozone hole peaked in September at its smallest observed extent since 1988, due to an unstable and unusually warm Antarctic vortex in 2017.

Measurements from satellites this year showed the hole in Earth’s ozone layer that forms over Antarctica each September was the smallest since 1988, scientists from NASA and NOAA announced on November 2, 2017. Scientists pointed to an unstable and warmer Antarctic vortex in 2017 – the stratospheric low pressure system that rotates clockwise in the atmosphere above Antarctica – as the reason.

Ozone is a molecule comprised of three oxygen atoms. A layer of ozone high in the atmosphere surrounds the entire Earth. It protects life on our planet from the harmful effects of the sun’s ultraviolet rays. First detected in 1985, the ozone hole is not technically a hole where no ozone is present, but is instead a region of exceptionally depleted ozone in the stratosphere over the Antarctic. This region of depleted ozone typically begins to appear at the beginning of Southern Hemisphere spring (August–October).

According to NASA, this year’s ozone hole reached its peak extent on September 11, covering an area about two and a half times the size of the United States – 7.6 million square miles in extent – and then declined through the remainder of September and into October.

Although scientists predict the ozone hole will continue to shrink over time, due to a global human cooperative effort to ban ozone-depleting chemicals, this year’s smaller ozone hole had more to do with weather conditions in Antarctica than human intervention, these scientists said.

Ozone depletion occurs in cold temperatures, so the ozone hole reaches its annual maximum in September or October, at the end of winter in the Southern Hemisphere. Image via NASA/NASA Ozone Watch/Katy Mersmann.

The smaller ozone hole in 2017 was strongly influenced by an unstable and warmer Antarctic vortex – the stratospheric low pressure system that rotates clockwise in the atmosphere above Antarctica. This helped minimize polar stratospheric cloud formation in the lower stratosphere. The formation and persistence of these clouds are important first steps leading to the chlorine- and bromine-catalyzed reactions that destroy ozone, scientists said. These Antarctic conditions resemble those found in the Arctic, where ozone depletion is much less severe.

Thirty years ago, the international community signed the Montreal Protocol on Substances that Deplete the Ozone Layer and began regulating ozone-depleting compounds. Scientists expect that the ozone hole over Antarctica will gradually become less severe as the use of chlorofluorocarbons—chlorine-containing synthetic compounds – once frequently used as refrigerants – continues to decline.

Scientists expect the Antarctic ozone hole to recover back to pre-1980 levels around 2070.

Although warmer-than-average stratospheric weather conditions have reduced ozone depletion during the past two years, scientists expect the average size of a modern-day ozone hole will continue to be large compared to ozone holes observed in the 1980s, when the depletion of the ozone layer above Antarctica was first detected.

They base this expectation on the fact that levels of ozone-depleting substances like chlorine and bromine remain high enough in Earth’s atmosphere to produce significant ozone loss.

Read more about how NASA and NOAA measure and monitor the ozone hole. 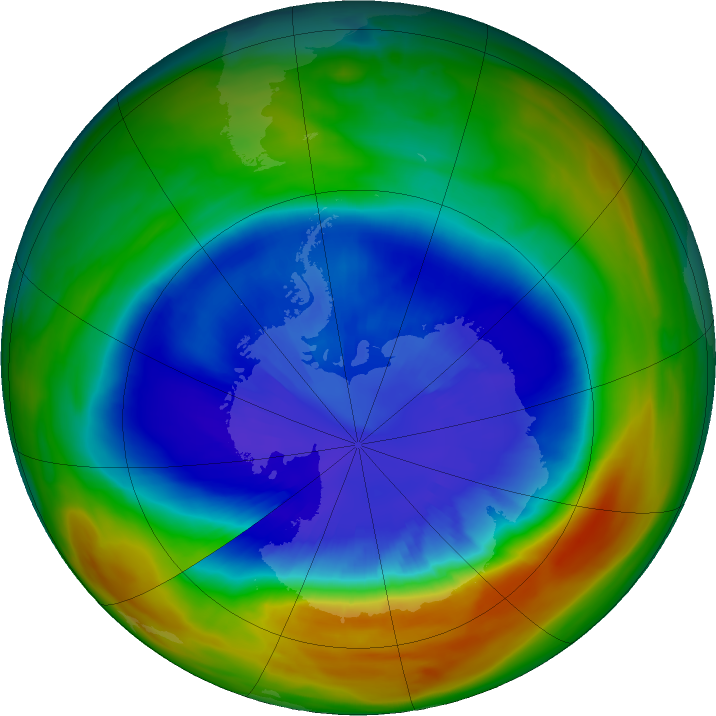 At its peak on Sept. 11, 2016, the ozone hole extended across an area nearly two and a half times the size of the continental United States. The purple and blue colors are areas with the least ozone. Image via NASA/NASA Ozone Watch/Katy Mersmann.

Bottom line: According to measurements from NOAA and NASA, the ozone hole over Antarctica in 2017 was the smallest since 1988. Its unusually small size is thought to be due to an unstable and warmer Antarctic vortex in 2017.