While some wetland birds in the U.S. appear to be doing well because of conservation programs, other birds are experiencing steep declines in population numbers.

The annual State of the Birds report was released on September 9, 2014—it documents the health of bird populations across the United States. While some wetland birds appear to be doing well because of conservation programs, other birds are experiencing steep declines in population numbers, according to the findings.

Of the more than 800 species of birds in the U.S., 233 have been placed on a Watch List in the new report. The Watch List provides an early warning system for birds that are most in danger of becoming extinct in the years ahead if significant conservation actions are not put in place to protect their populations. The list includes all native Hawaiian forest birds and birds in the continental U.S. such as the Rufous hummingbird, California condor, and wood thrush. 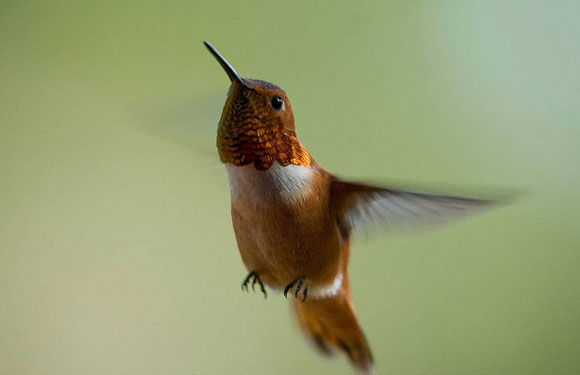 Rapid population declines were also detected in 33 bird species that were not placed on the Watch List. These birds are relatively common across the landscape and include species such the snowy owl, black tern, and eastern meadowlark.

When the data were classified according to habitat, the birds showing the steepest declines were those from arid lands including desert, sage brush, and chaparral in the western U.S. The birds in these habitats have experienced population losses of 46% since 1968. In contrast, several wetland bird species like Mallards have experienced population gains of more than 40% since 1968. These gains are thought to represent successes stemming from wetland conservation programs. 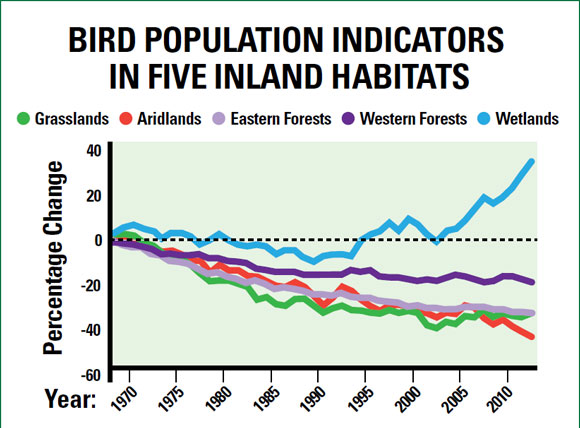 Image appears courtesy of the 2014 State of the Birds Report, U.S. Department of the Interior.

The primary cause of the declining bird populations is habitat loss and fragmentation. Other important driving factors include invasive species, pollution and climate change. A second preliminary report from the Audubon Society has found that as many as 314 North American bird species will be negatively impacted by climate change; these species stand to lose more than 50% of their current habitat range by the mid to later parts of the 21st century.

Some of the best things individuals can do to help birds is to keep your cats indoors, reduce your use of pesticides, and make your large windows bird friendly with decals. Cats kill about 2.9 billion birds each year in the U.S., according to the State of the Birds report, and collisions with building windows result in an additional 599 million annual bird deaths.

Data for the State of the Birds report were derived from long-term government monitoring programs and citizen science efforts such as Audubon’s Christmas Bird Count and the eBird project.

The report was compiled by 23 government and conservation organizations including the National Audubon Society, the Cornell Lab of Ornithology, Ducks Unlimited, Environment Canada, the National Park Service, the Smithsonian Institution, The Nature Conservancy, the U.S. Fish and Wildlife Service, the USDA Forest Service, and the U.S. Geological Survey.

This group of organizations has been producing annual State of the Birds reports since 2009; the current report is the fifth one to be released.

Bottom line: The 2014 State of the Birds report documents the health of bird populations across the United States. The report notes that while some wetland birds appear to be doing well because of conservation programs, other birds are still experiencing steep declines in population numbers largely because of habitat loss and fragmentation. A Watch List containing 233 birds was created to highlight the need for conservation programs that will protect at risk species.