Forecasts from Colorado State suggest the 2012 Atlantic Hurricane season will be less active than the average year.

It is April, so what does that mean? It means it is time to focus on the 2012 Atlantic hurricane season!

Every year around this time, Colorado State releases their early Atlantic hurricane season outlook which predicts how many named storms we might see for the upcoming season. This season, Dr. William Gray and Phil Klotzbach are projecting a slightly below average season in the Atlantic, with ten named storms, four hurricanes, and two major hurricanes with wind speeds over 110 miles per hour. The main focus of these forecasts have to do with the ENSO, or El Niño Southern Oscillation, and the current temperatures in the tropical Atlantic Ocean. 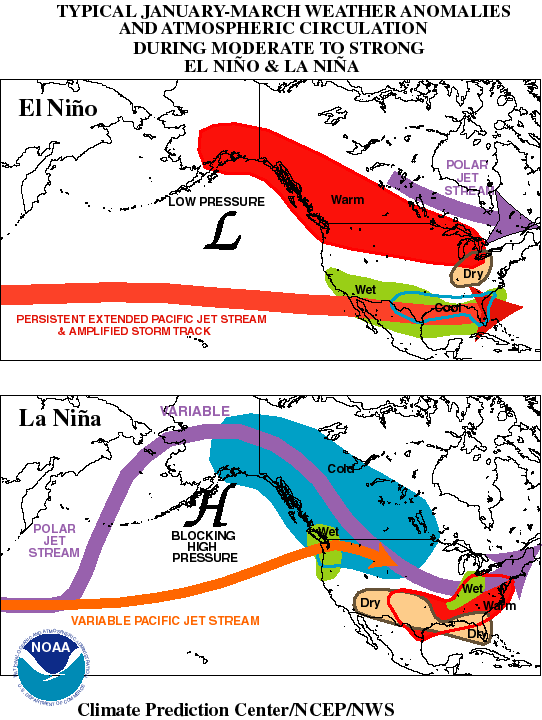 In Fall 2011, we were in a weak La Niña pattern, which is the cooling of the waters in the Eastern Pacific Ocean. ENSO cycles can play a major role in the weather globally. For instance, in the United States, La Niña’s are typically known to produce mild winters across the southeast United States and cooler and wetter conditions across the Pacific Northwest. Of course, there are other contributing factors as to why we experienced a mild winter across the United States, but it is important to note that La Niña was a contributing factor. As of today, the weak La Niña pattern has transitioned to neutral phase, but the overall trend is that the eastern Pacific Ocean waters are gradually warming up.

Towards June/July of 2012, a weak El Niño is expected to develop. Typically in El Niño years, wind shear increases across the tropical Atlantic ocean, which is one of the factors that played into Colorado State’s 2012 hurricane projection. Tropical systems cannot develop in areas of strong wind shear, and a strong system that pushes into an area of increased wind shear typically weakens. In El Niño years, South Asia could experience drought conditions while parts of the western coast of South America could see an increase amounts of rainfall.

Another reason the 2012 Atlantic Hurricane season could become less active than previous years is because the overall temperatures across the Atlantic ocean are cooler than what we typically see for this time of year. However, the Caribbean and parts of the Gulf Of Mexico are warmer than average. Sea surface temperatures must be over 80° Fahrenheit or 27° Celsius. With temperatures slow to cool, there might not be enough energy to fuel storms that could develop. Ocean temperatures play a huge role on the strength of tropical systems, but are not the only factors. Since temperatures are much warmer along the East Coast and in the Gulf of Mexico, we will definitely have to monitor these areas for future tropical development when the season begins on June 1, 2012.

Here’s a look at the numbers: 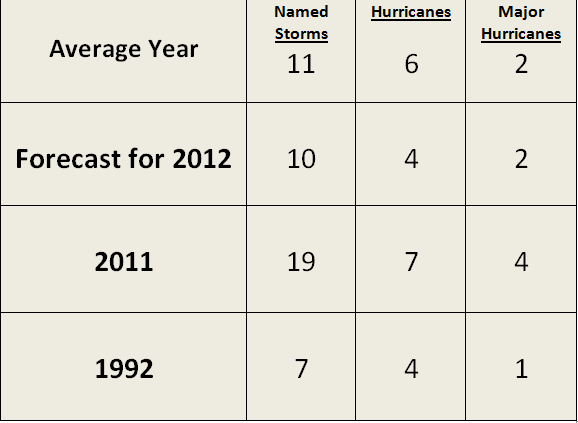 Even though the forecasts claim we should see a less active hurricane season in the Atlantic, it does not mean we will be safe from strong storms impacting populated areas. It only takes one storm to make the season bad. For example, take a look at 1992. 1992 was an El Niño year that only produced seven named storms. However, one of those storms became a major hurricane and caused massive amounts of destruction across the Miami-Dade area and across Homestead, Florida. Hurricane Andrew was a Category 5 hurricane with wind speeds around 165 miles per hour. The storm killed 65 people and had $26 billion dollars in damage. With this in mind, everyone should take each season seriously and be ready for tropical systems, especially if you live along the coast.

“Regardless of how active or inactive the seasonal forecast is, it takes only one landfall event near you to make this an active season”

Bottom line: The early forecast for the Atlantic hurricane season is for us to see a below average season with ten named storms, four hurricanes, and two major hurricanes. The likelihood of seeing an El Niño and having cooler waters in the Atlantic ocean could contribute to fewer storms developing during the 2012 season. However, it only takes one storm to make the season go from great to bad. All residents should still take the necessary precautions in advance of this season in case a storm decides to develop and hit their area. NOAA and Colorado State will have a revised outlook that will be released in late May and early June regarding the 2012 season.