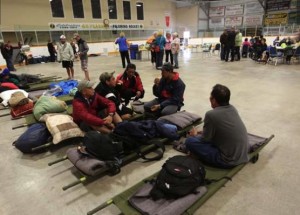 Waiting at a recreation center in Nanton, Alberta after being evacuated from High River, Alberta on June 20, 2013. See more photos of the flooding via the Windsor Star.

Thank you! Your submission has been received!
Oops! Something went wrong while submitting the form.
END_OF_DOCUMENT_TOKEN_TO_BE_REPLACED